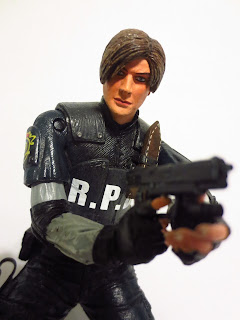 Resident Evil 4 changed everything for Resident Evil. The gameplay, puzzles, nature of the "zombies" encountered, and even the fan base were all altered by Resident Evil 4, which saw the return of fan favorite Leon S. Kennedy (the S. stands for 'Scott') and the transition to a more action-based game play through more open areas.  Since companies like Toy Biz, Palisades, and Moby Dick have all taken swings at the earlier games in the Resident Evil series, NECA decided it was their turn and began releasing action figures based on Resident Evil 4.  After two series of figures and two different versions of Leon, NECA decided to release a special SDCC 2006 version of Leon as he appears in one of his unlockable outfits from the game: his R.P.D. outfit from Resident Evil 2.  Ready to take a look at an interesting and fun exclusive? Then join me after the break.... 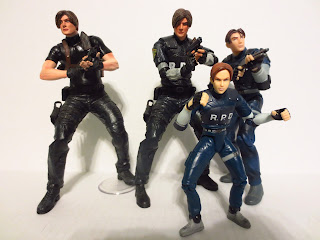 Leon stands a little over 7 inches tall, though he is crouching a bit.  He's in scale with most of NECA's other Resident Evil figures, naturally. You can look at my pictures of him next to the Palisades figures to decide if the difference in scale there is too much for your tastes.  NECA really tried to match him to the source material of Resident Evil 4, so he's a decent likeness but wouldn't look out of place amongst any of their film-based figures, either.  As a SDCC exclusive, he does reuse some parts: the head, lower body, and hands from both earlier versions of Leon. 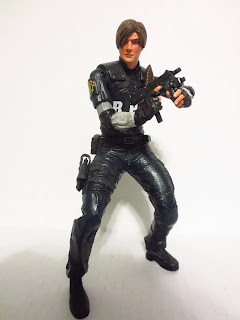 Not only are we looking at some Resident Evil history today, but we're also looking at a bit of NECA history. While most of NECA's modern figures have plentiful articulation (Dutch, the Predators, and Rocky all come to mind) it was only a few years ago that many NECA figures were much more like miniature statues.  Leon falls into that camp. He's got some great articulation on his upper torso, but his lower body is mostly static  Leon features: swivel ankles, a swivel waist, ball jointed shoulders, swivel biceps, true ball jointed elbows, swivel wrists, and a ball jointed head.  Since the figure is already preposed in an action stance, the sole purpose of the articulation is to help him get into different poses while holding the various weapons. That can be various double-handed shotgun stances, aiming the pistol, wielding the knife, or prepping to toss a grenade.  I've had this figure probably since 2007, but during this review I noticed that the shoulder joint in his right arm was broken.  It will still attach and stay on in most weapon poses, but it definitely is broken. Since I've had him for 6 years and have posed him and moved him quite a few times during that period, I'm not going to judge him too harshly, but I'll definitely warn you before you drop money on him: look out. 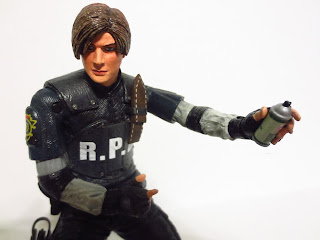 The lower part of Leon's body is shared with the other two Leon figures that NECA released.  His pants are well detailed with folds, seams, and cargo pockets.  The belt piece is really detailed and features plenty of gear and storage space. I particularly like the well designed holster, the various storage pouches and clip sleeves, and the tracking device hanging from his belt.  The head is also the same as the other Leon figures. It's a pretty good head sculpt and if the face doesn't automatically scream "Leon!", the hair certainly will.  He has a pretty steely expression.  NECA did an excellent job of capturing the R.P.D. police uniform Leon wore in Resident Evil 2 while also modifying it just a bit to look more updated.  The armored plates on the chest and shoulders are still there, but don't stand out quite as much as they did. They actually look better, though.  You can see the texture of the material and the way the plates of armor are riveted to it if you look closely enough.  He's also sporting some pretty nice tactical elbow pads, which double great for rollerblading if he desires to take up the sport. NECA delivered enough new stuff on this figure to make it feel pretty new, despite reusing quite a bit of some previous figures. 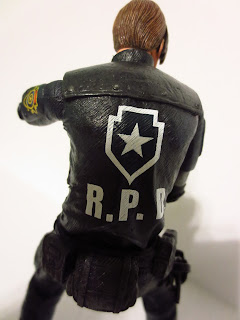 Most of the figure is molded in dark blue plastic and left unpainted to replicate Leon's outfit. It works pretty well. The "R.P.D." lettering on the front and the back is clean and the face is well painted.  Leon looks like he might have a bit of eye liner on, but that's just how he rolls.  The gear on his belt is all molded in black plastic and there are some nice extra details, like the intricate stitches on his knife sheathe, the R.P.D. badges on his shoulders, and the rivets on his armor. 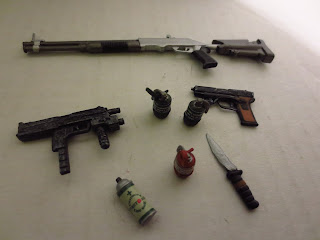 Leon, like many of NECA's Resident Evil figures, is loaded with accessories.  While quite a few of Leon's accessories are reused from the jacket-less Leon figure, the shotgun is brand new for this particular figure. Besides the shotgun, Leon also comes with three grenades, a first aid spray, a knife, a pistol, and a sub-machine gun.  The shotgun is called the riot gun in-game. It's well sculpted and very solid; Leon looks great holding it with both hands.  The sub-machine gun is the TMP and the pistol is known in-game simply as "Leon's handgun".  Both can fit in his right hand easily and are well designed weapons.  The grenades come in two flavors: the green hand grenades and the red incendiary grenades. You get two greens and a red.  Not only do the grenades have a sticker on them that has actual printed text, but the pins are removable.  The knife can be sheathed on Leon's shoulder and held in either hand. Lastly, the little bottle of first aid spray is a small cylinder that nicely replicated the in-game accessory and can cure any wounds you might run across. There's a ton of stuff here, so be careful not to lose it. 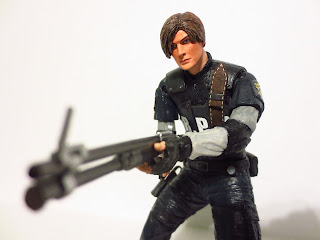 Leon was definitely a cool con exclusive when he came out, and if you're looking for the best Leon in his Resident Evil 2 police uniform for display, this is probably it.  Just be careful, as he does seem to be a bit fragile.  I'd consider that most folks buying him now would certainly just be standing him around, so I'll give him a good.  He does look very nice on display- it's really a shame NECA has never released a Claire to go along with him.  NECA's really seemed to sit on the Resident Evil license- they've had it for awhile and, other than the Resident Evil 4 figures, they've been pretty sparing. It amazes me that Hot Toys can sell $200 versions of Resident Evil characters like Wesker and Jill, and yet NECA has seemed to feel there's no market for those figures. Baffling, huh?

Hungry for more Resident Evil and zombie reviews here at The Epic Review?  Then check out these other figures that have been  reviewed here: Chris Redfield and Cerberus, William G-3/ William G-4, Leon S. Kennedy & Licker,  William and Sherry Birkin, Claire Redfield and Zombie Cop, Jill Valentine & Web Spinner, Hunk & Zombie, and Mr.X/ Super Tyrant have all been reviewed from Toy Biz's Resident Evil line.  We've also looked at Chris Redfield from Marvel Vs. Capcom 3's Minimates.  Big Bad Toy Store has lots of Resident Evil toys in stock, both new, old, and stuff not yet released but available for preorder, so head over there to satisfy your cravings!