Action Figure Inter/Review: Pirate Batman and Pirate Two-Face from Legends of Batman by Kenner (Good and a 1/2) 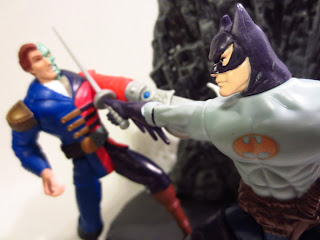 It feels like a few years back--probably around the time that the third Pirates of the Caribbean film was released--that American pirate popularity reached its zenith in American popular culture.  In 2007 it seemed like you could find nearly anything and everything you wanted regarding pirates. Well, everything except pirate themed Batman figures; those actually were released in 1996 as part of the third series of Kenner's Legends of Batman toyline.  The line included The Laughing Man Joker, First Mate Robin, Buccaneer Batman, and the subject of today's Inter/review, the Pirate Batman & Pirate Two-Face two pack.  Today we've got these two very special guests stopping by ThEpic Review's studios to chat with us for a few.  Ready for an action figure inter/review that will shiver your timbers? Then read on after the break... 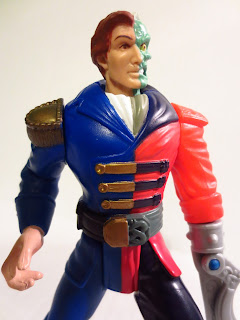 Barbecue17: Gentleman, thanks for stopping by ThEpic Review's studios today!  It's really a pleasure to have you two gentlemen here today. How was your trip here?


Pirate Two-Face: Aye, it be a treacherous journey through long and hardy sea, but my crew travailed it, the scurvy dogs that they are.  Of course, when I get up on the wheel and curse into the sea like a wild cuss, me crew have the fortitude to cross any watery expanse!


BBQ17: Umm...OK. We're not located anywhere near the coast, you know, so I'm not sure what the heck you're talking about.  Anyways, let's talk about you guys- you're both pretty built and kind of fearsome.  How tall are you fellows?

BBQ17:  OK, I'm going to assume that a barrel of rum is 2 inches tall, multiply that by 2, add half of that...... let's put you down for 5 inches? Does that sound correct? I mean, I wasn't planning on having to do math or anything today. 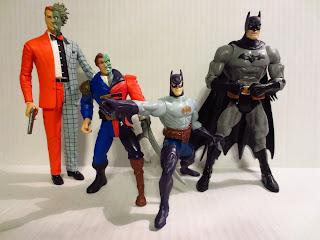 Two-Face: That be fair enough, matey!  Let me sing you a beloved sea shanty from my youth, or perhaps pour you a mug of grog? Arrggh!!! Do you have a privy?  I need to brush me barnacles and fly the jolly roger! 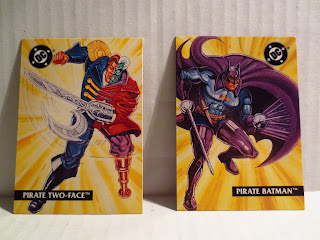 BBQ17: Ummm...  what?  Can we just get the interview going?  So, why are you two fellows fighting?  Over treasure? The heart of a woman? Cursed gold?


Two-Face: After a tragic accident left me scarred, I became one of the greatest pirates to sail the high seas, deciding the fate of me victims with the flip of a coin!  It be a fairly unique pirate gimmick.

BBQ17: And what about you, Batman? 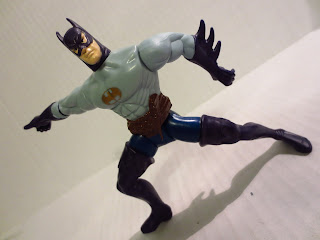 BBQ17: OK, moving right along... So, it seems like you two are posed for some dueling action.  How're your dueling skills?

Batman: My uniform gives me the ability to swivel at my hips, shoulders, right wrist, and neck.  I can also do this: *Batman spins his right wrist around in a dueling motion* 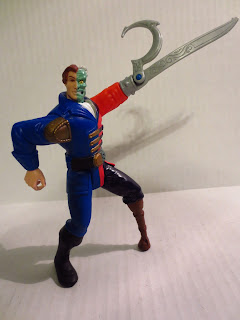 Two-Face: Arrgh! I be festooned in a uniform that allows me to swivel at my hips, shoulders, left wrist, and neck.  I can also spin my hook hand/sword combo around in this cool fencing motion. My hook be hinged as well, for slicin' down scurvy dogs.

BBQ17: That really is some wild get up you're wearing, Harvey. Can I call you Harvey?  It definitely marries together your traditional comic look with a pirate theme.  Elaborate for me.


Two-Face:  Well, the right half of this outfit be my sailing duds from back when I was a trusty commander of her majesty's navy.  Check out me gold epaulets, polished black boots, and schnazzy belt.  The left half is what I picked up after me accident to match my "other half."  That's also where all the damage occurred, thus the peg leg, hook hand, and scarred face.  Not everyone could pull this look off. 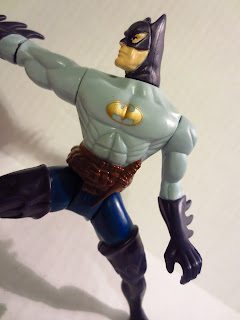 BBQ17: Batman, you're outfit looks a little familiar. Is that a reuse of your Power Guardian outfit?


Batman: A little dye does wonders.

BBQ17: Yeah, I like the purple boots and gloves with the brown belt.  It's kind of sharp.  Sweet cape, too.  What do you use that cape for? 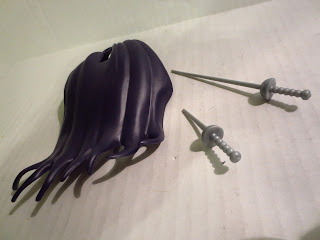 BBQ17: So, you guys seem nicely armed for a duel.  Batman, you've got two swords, a short one and a long one, and Two-Face, you've got your hook hand with a sword attached.  That's some mighty fine decoration on your bladed hand, I might add.  Anyways, can you show me how you guys fight? 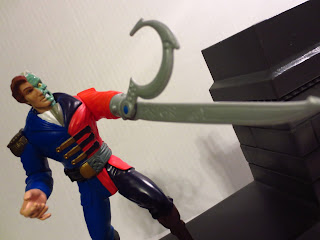 Two-Face: Sure, matey. I'll finish this landlubber and send him down to Davey Jones' locker once and for all.

BBQ17: Umm, all you guys are doing is spinning your wrists.  Is that really going to do anything?


Two-Face: Sure! Can't you see old Bats is wearing out? 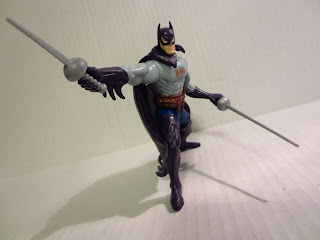 Two-Face: I'll get him now!

*They continue spinning their swords*

BBQ17: OK guys, about to wrap this interview up. Have we covered everything?

Batman: Not everything. Not yet.

BBQ17: What haven't we covered?

BBQ17: Yup, we're done here. See you two around and thanks for stopping by! 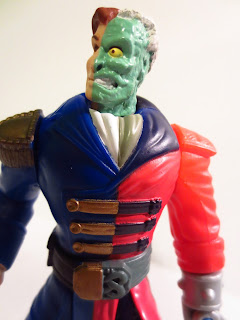 Well, that was interesting.  While Batman is a repaint, he looks pretty good, and Two-Face is a very cleverly designed figure. I really like this two pack (and it makes sense for Two-Face to come in one) so I'm considering giving it a Good and a half. I wish Two-Face came with an extra accessory for his right hand (a flintlock pistol would have been great) and his peg leg is susceptible to being bent when removed from a package, but overall this is the best of the Legends of Batman two pack (there's an Egyptian Catwoman and Batman pack that I'll get to at some point).  If you've ever wanted a pirate themed Batman and Two-Face, these guys can be had on the cheap, and are quite fun additions to any bizarre Batman collection. 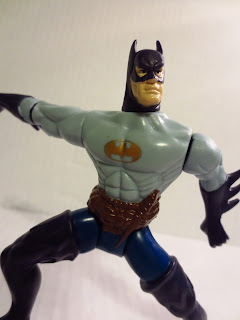