Action Figure Interview: Cyborg Batman from Legends of Batman by Kenner (Good and a 1/2) 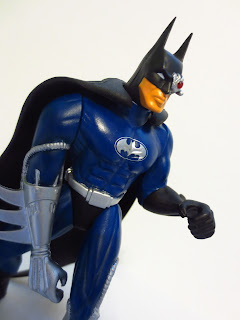 Today on Action Figure Interview we have a special guest from Kenner's 1990's Batman line "Legends of Batman", Cyborg Batman.  Released in the first series of Legends of Batman figures in 1994, Cyborg Batman came out as part of Kenner's first foray into larger, more dynamically posed Batman figures that were more similar in style to some of Playmates Toys offerings.  Utilizing the concept of DC Comics' Elseworlds line, Cyborg Batman represents a version of Batman from the future: the year 25000, that is.  As the blurb on the back of the package and trading card states: "In the year 2500, Batman has enhanced his strength with custom mechanical parts!  His left eye can see incredible distances, even in the dark, while his arm and leg have gained amazing strength, thanks to his artificial devices.  And his laser-powered blaster never misses! Far into the future, Cyborg Batman will do anything to stop the progress of crime."  Pretty slick- Batman and Terminator mixed together, huh? Anyways, I see Cyborg Batman entering ThEpic Review's command center; let's start the interview now....

Barbecue17: Hi there Cyborg Batman!  Thanks for stopping by ThEpic Review today!  How was your trip here?
Cyborg Batman: My trip from the future was uneventful. *beep boop beep*

Barbecue17: So, do you want me to call you Cyborg Batman? Just Batman? How about Cy-Bats.  That sounds pretty awesome.

Cyborg Batman: That will suffice. 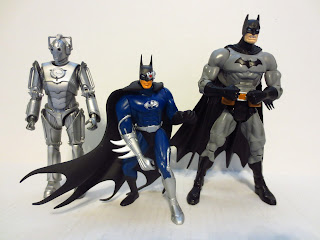 Barbecue17: Sweet. All right, Cy-Bats-tell me a little about yourself? Let's start with your vital statistics.

Cy-Bats: I am 5 7/8 inches tall.  I feature five points of articulation, which are composed of swivels at my neck, hips, and shoulders.  *beep boop beep* I have been designed to blend in with the majority of Batman action figures produced in the 1990s by the toy company Kenner.  *beep boop beep*


Barbecue17: Very interesting.  So, what's the future like?  Does Christian Bale end up playing you again in the Superman/ Batman movie?

Cy-Bats: I am not able to disclose anything past your current time. I apologize, but this is part of the ethics of time travel. 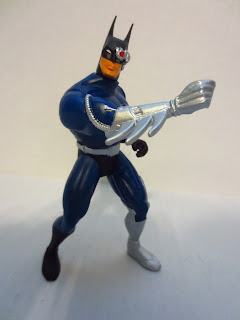 Barbecue17: I'm going to take that as a yes and report it as fact!  So, what's that crazy getup you're wearing?

Cy-Bats: This is my standard form fitting futuristic Batsuit cybernetically enhanced to increase my strength and vision. *beep boop beep*

Barbecue17: Yeah, the mechanical left leg and right arm are pretty cool. You kind of remind me of the Terminator. Terminator Batman. That's pretty slick.  Where do those wires go?

Barbecue17: Dang! That's hardcore!  Anything else hardcore you have!

Cy-Bats: I have a tattoo of Adam West and Burt Ward on my junk. 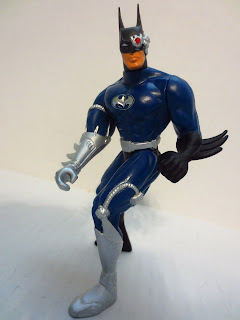 Barbcue17: Umm.. OK.  So,  what does your robot eye do? Do you have thermal vision like the Predator?  Is it connected to the Batcomputer like the contact lenses you wear in the New 52?  Maybe some type of device that allows you to reconstruct environments like Tony Stark in Iron Man 3?

Cy-Bats: It allows me to see incredible distances.

Barbecue17: That's it? It doesn't shoot lasers? or anything? X-ray vision? 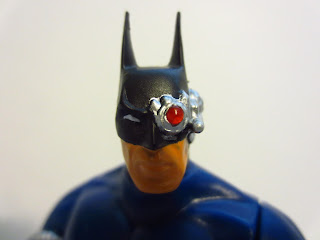 Barbecue17: Can you define that?

Cy-Bats: Do you have one of those charts that you'd find at the eye doctor's office laying around?

Barebecue17: Sure *holds up eye chart* what do you need it for?

Barbecue17: Wow! You read the bottom line perfectly! That is pretty impressive! Hey, you're eye is glowing red. Why is it doing that? 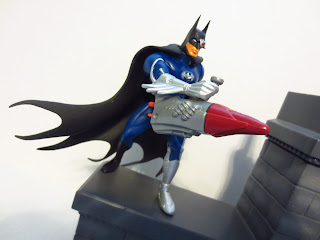 Barbecue17: Sorry to burst your bubble.  Your cape's kind of cool. It's very dynamic and billowy.

Cy-Bats: Thanks. It falls off pretty easily, though, so that's why I prefer to slowly walk after my enemies rather flying through the air.

Barbecue17: So, what's that weapon you have there. It's a missile launcher of some kind?

Cy-Bats: Affirmative.  It is a laser-powered blaster that never misses. 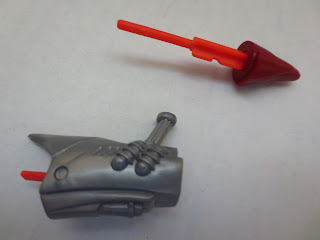 Barbecue17: Sweet! That sounds really fancy! Can we take it out back and shoot stuff with it?  I have an old couch we could shoot at!

*Barbecue17 and Cy-Bats walk out back*

Barbecue17: OK- see that couch over there?  Let's demolish it!

*The missile pops out of the launcher, flies about two and a 1/2 feet, and lands with a small thud* 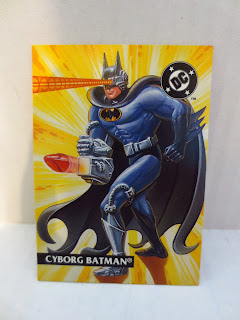 Barbecue17: Umm.. that wasn't too impressive.  It just kind of popped out. Is that just a regular spring loaded missile launcher.

Barbecue17: Well, it does look cool, so there's always that.  Anyways, can you at least tell me if there's a Cyborg Batgirl running around? I'm just curius.

Barbecue17: Rats. Well, thanks for stopping by Cy-Bats.  It was definitely a pleasure!  Have fun in the future! 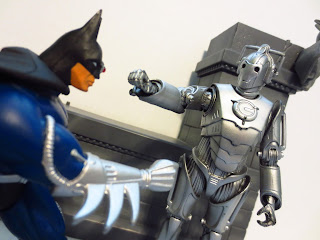 As Cyborg Batman left ThEpic Review studios, I was impressed by his super cool outfit and the cleanliness and detail of his gear. He was an impressive action figure and there is just something fun about a Cyborg Batman. His cape could fit a little better, but he can stand, hold his weapon easily, and comes with a trading card. I'm quite pleased by him and fans of crazy Batman variants should be pleased also. In the end, he received a Good and a 1/2.  I wish his eye actually lit up, but light piping is always cool.