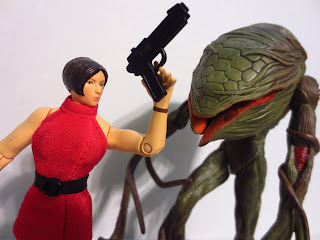 This is it! The last review from Toy Biz's Resident Evil/Resident Evil 2 line!  How exciting! It also means that I completed my collection of these figures--something I've been meaning to do for some time.  Today I'm looking at one of the sets from the last series of figures: Ada Wong and Ivy.  I've wanted this set for quite a while but only recently acquired it, so I'm really excited to be taking a look at it today.  Ada Wong has definitely become one of the most prominent characters since her appearance in Resident Evil 2,  but has only been immortalized in plastic by NECA for their Resident Evil 4 line, and is soon to be released by Hot Toys as a very cool 1/6th scale figure.  Ivy is another character/creature that has only ever appeared once, in the Biohazard 3 line by Moby Dick toys, and it's always fun to look at something that hasn't been done a million times before.  Ready for a look at this very cool set?  The read on, after the break.... 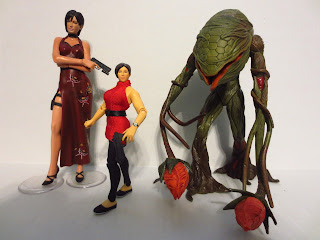 Both Ada and Ivy have a more realistic look to them than many other Resident Evil figures. Most of the monster creatures do, but Ada looks to have less anime influence in her than the other human figures in the line. Well, she does have the proportions of some anime girls, but that's about as far as it goes.  Ada's just a hair short of five inches, so she'll fit in great with everyone else in the line.  Ivy's about 7 1/2 inches, but since the figure is hunched over, the creature is probably a lot bigger. I personally think Ivy looks just fine next to the Palisades and NECA Resident Evil figures, so if you're looking to expand those collections, it makes a good fit. 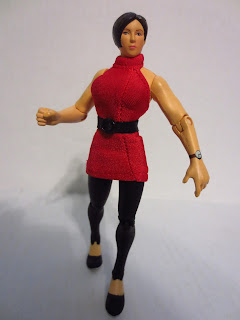 Ada's articulation is slightly different than the other human characters, like Leon, Hunk, or Jill, that we've seen in the line. She has hinged ankles, hinged knees, swivel hips, a swivel waist, swivel shoulders, hinged elbows, and a swivel neck. She also has no action feature. With a little fidgeting, you can get her in a few nice standing poses. 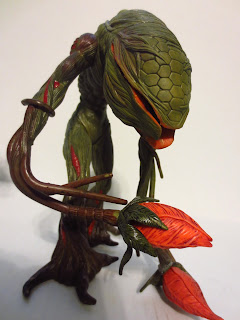 Ivy's articulation is more difficult to decipher: Ivy features swivel hips and swivel shoulders, but the legs and arms seem to be made of a bendable material.  The lower arms feature quite a few vines and stems that can easily be posed to great effect. Due to the way the figure is hunched forward, Ivy really needs to use it's arms to stand, but I think that's true to the game, if I remember correctly.  Ivy features a pretty cool action feature: push a button on the back of the creature's head and the mouth opens from three directions, like a plant. It's made of a soft rubbery material that seems pretty sturdy. It's a very nice effect overall. 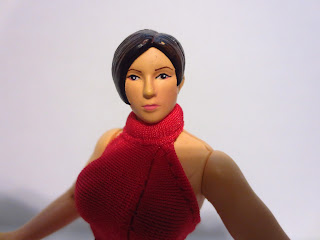 Ada is most certainly an attractive character, and Toy Biz has done a decent job of capturing this in the figure's sculpt, but it again makes me wonder if they reused the body from one of their Marvel females because Ada is built like a comic book heroine, meaning she's very top heavy.  Looking at her a bit more closely, I'm curious as to whether her torso proportions are too large or if her head is too small.  She certainly has a different look to her than the other human figures in the line.  She's dressed in her outfit of black leggings and a red dress.  To create the dress, Toy Biz actually used a stretchy material to create a soft goods piece that looks really good in this scale. It's completed with a pleather material belt and a tiny buckle.  It looks fantastic. If you're wondering: no the dress is not removable, at least not without cutting it, but you can tell that Toy Biz has painted on a top to preserve Ada's modesty. The head sculpt I mentioned above, which while a little small, is quite nice. Ada definitely has a more realistic appearance to her than other humans in the line and seems to be far less anime influenced. 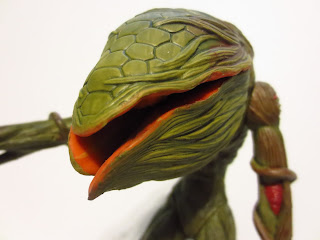 I've said over and over that in the sculpting department, the creatures usually come out ahead. That's never been truer, as Ivy is a fantastic figure just smothered with excellent detail.  Ivy truly looks to be composed of plant fiber and is crawling with vines.  The arms are composed of multiple vines and feature a bud on the end to serve as a hand of some kind.  The legs look to be roots that narrow out near the top to form the thighs and body.  Once again, a figure with so much organic detail is hard to explain, so just take a look at the pictures.  Both of these figures are good, but Ivy is amazing. 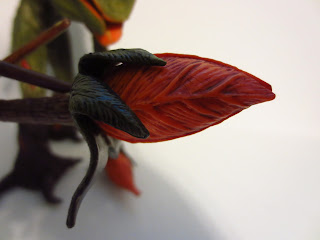 The paint work just further enhances Ivy. While the plant is molded in a deep green plastic mixed with black, the wash and paint work on the limbs, buds, and interior of the mouth really makes the figure pop.  It's a figure that sculpt- and paint-wise would probably be almost as impressive today as it was back in 1999. 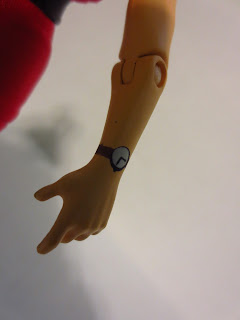 Ada's decent, but nothing we haven't seen before.  The face is very clean and neat with just a touch of makeup to help her look her best.  She's got a wrist watch painted on her left wrist that's fairly detailed, but the rest of her body is a sleeveless black bodysuit painted on.  Well, the shoes are actually a separate paint scheme and do feature a little white rim around the edge.  The paint is uneven on her ankles, however, as the hinge is painted flesh on one ankle, but not on the other. 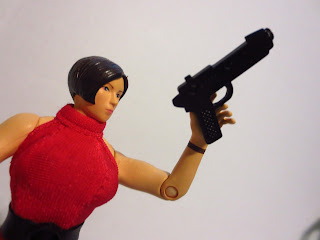 Perhaps it's due to the presence of Ivy and the fact that Ada actually has a really nice outfit made from a stretchy material, but she's pretty light on weapons. She only comes with a pistol. Granted, it's actually the only weapon I recall her using in Resident Evil 2, so can I really fault Toy Biz?  It's not a bad accessory, but it is a reused one. This pistol was originally seen with a variety of Punisher figures from Toy Biz in the early 1990s, and again with their Lara Croft figure in the mid-late 1990s.  What's funny is that when I first got Claire and Chris in my younger years, I still had this pistol floating around from a Punisher figure, so my Resident Evil toys were using it before this set was even released. This version does have a small peg on the handle which plugs into Ada's left palm. It stays securely, but it certainly doesn't look like she's holding the pistol properly.  More like she's trying to carry a dog turd in a paper towel and she doesn't want to grip it too tightly so nothing seeps through and soils her hands. 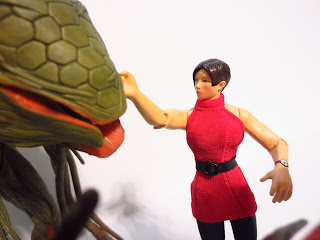 So, did I save the best for last? Not exactly, but this set with Ada and Ivy is certainly one of the best. It's a shame that Toy Biz didn't get to release figures from Resident Evil 3: Nemesis or Resident Evil: Code Veronica, as I'd love to see how they'd handle Jill in her off-duty outfit, Steve, a Bandersnatch, Alexia, and maybe even Wesker. As it is, this is a Great set. It's perfect within Toy Biz's own Resident Evil line, but Ivy also works with your Palisades or NECA figures to give you another creature for your roster.  Confirmed: Great! Now, no more Resident Evil reviews until 31 Days of Articulated Horror, here at ThEpic Review this October.