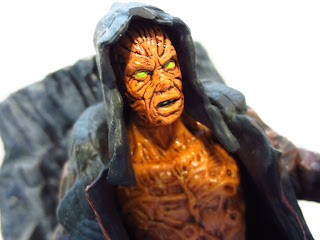 Slowly but surely I'm picking up Spawn: The Movie figures here and there.  While I only owned Spawn and Jason Wynn from when the movie was originally released on August 1, 1997, over the past few months I've picked up Jessica Priest and Al Simmons, and now I've picked up Burnt Spawn.   This figure represents Al Simmons (played by Michael Jai White) after he returns from Hell after making a deal with the villainous Malebolgia.  Not yet aware of how to use his Spawn powers yet, Al's still running around looking like a hobo version of Freddy Krueger.  While it's been years since I last watched the movie (although I do plan to rectify that as I found a DVD copy last weekend for $1) I think this figure's accessories tie into a scene where Spawn meets the Clown and ends up digging up his own grave. Am I right? Wrong? Does anyone really care? Let's just look at this toy! 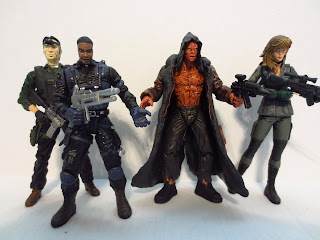 Burnt Spawn is right around 6 inches tall and is done in a fairly realistic style, at least by the standards of 1997 when the figure was originally released.  While he'll fit in just fine with most earlier McFarlane Spawn figures, I've always put my Spawn: The Movie figures alongside of my McFarlane Metal Gear Solid toys and my Plan B/ Resaurus Special Forces figures. That's probably where this guy will go, too. 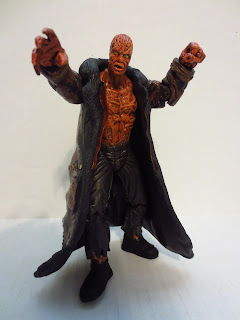 Articulation is pretty standard--Spawn's not preposed, and he features a few joints that allow you to change him up a bit.  He features: hinged knees, swivel thighs, swivel shoulders, hinged elbows, swivel wrists, and a swivel neck.  There's nothing there that's close to most of the well articulated figures today, but you can still use his arm joints to pose him in different ways with his weapons, and the leg joints give him a little versatility while standing. The Spawn: The Movie figures seemed to have much better QC than most McFarlane figures, and that's no exception for Burnt Spawn guy here. He's solid, baby. 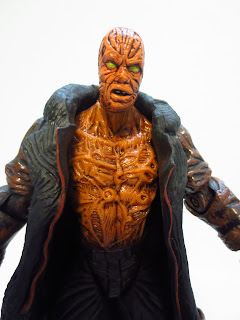 I like the sculpt--he's really gruesome and creepy, although I'll stand by my earlier claim that he looks like a hobo version of Freddy Krueger.  The charred flesh of his chest, hands, and face is quite grotesque with great attention to detail in regards to his underlying musculature.  The clothes are pretty good too. I can't remember where Spawn finds this stuff in the movie, but it's an old pair of boots, ripped pants, and a giant coat. The coat's fur lined and stitched together in multiple places. It's a separate piece from the main body but isn't removable. All in all, gory, good fun. 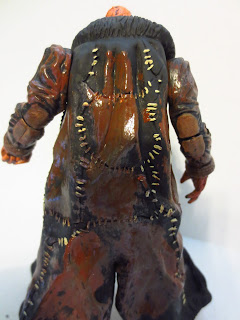 The paint's fairly nice, too.  The burned parts of his skin are well painted with a nice light wash to bring out the minute details. The sleeves of the jacket look good with a muddy paint scheme, but the jacket is absolutely covered in mud. Actually, it's so much mud that it kind of looks ridiculous, perhaps as if Spawn was hosed down with chocolate syrup. That's a weird sentence right there.  So the skin's good, the jacket's OK. 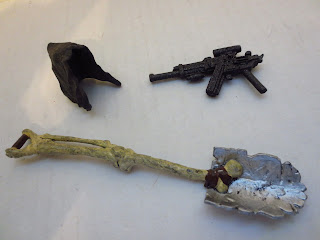 I really like the accessories. First, there's a hood that can fit over Spawn's head and easily rests between the jacket's collar and Spawn's shoulders. It stays on well and looks great with it's great mud-splattered paint scheme.  Second is a machine gun. It looks to be a compact assault rifle of some type, and it's easily wielded in Spawn's left hand.  It's molded in a black plastic with metallic specks that gives it a nice gunmetal appearance. 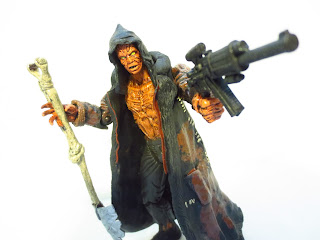 Lastly is the ridiculously cool bone shovel. Was this in the movie?  It looks like some leg bones, a wooden rod, and a sheet of metal fashioned into a creepy shovel that wouldn't look out of place at Clive Barker's house. Spawn can't really grip the shovel, though, so his hand has to slip between two of the bones to carry it. Overall, I do like this figure. Not as much as the human figures in all their tactical gear, but still quite a bit. I think I'm going to go with a Good and a 1/2. The sculpt is pretty decent and the accessories are quite fun.  He's a fun, creepy figure to just have hanging around on your shelf or in a horror diorama. I'm not disappointed I grabbed him, and of course he's availabe cheap when you find him most of the time (usually less than $10). 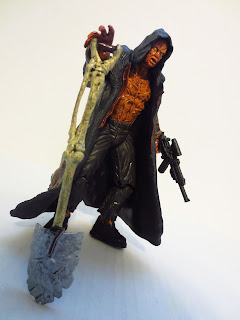