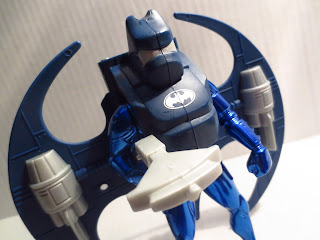 So far this year I've pretty much finished my Aliens and Predator lines from Kenner (except for a few of the really rare figures), completed Playmates Monster Force, and picked up every figure I needed to complete my set of Toy Biz's Resident Evil line.  What's next? Well, lately I've been working on Legends of Batman. I'm getting there. Today I'm looking at another of the "Deluxe" figures in the line (deluxe meaning shiny, apparently), Flightpak Batman.  Released in the first wave of series 2 in 1995, this version of Batman is told to be from "the near future" with the mission "to battle criminals straight out of cyberspace."  Yup, that sounds like something someone with no grasp of the internet might say.  Anyways, when I look at this "Deluxe" figure, it seems like someone tried to squeeze in everything they thought would appeal to a kid: the figure is shiny, bright, has a giant jet pack, comes with a gun of some kind, and is Batman. To me, it's actually a painfully dull figure. Agree? Disagree? Read the review and come up with your own opinion... 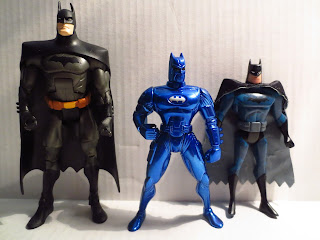 Flightpak Batman is one of the few figures in the Legends of Batman line that's standing straight up rather than hunched over in some type of battle stance.  That makes the figure a little taller, coming in at 5 1/8 inches.  He'll not only fit in with your Legends of Batman figures but could probably fit in with figures from other late 90s Batman and DC lines like Batman Forever and Total Justice.  You could probably even use him in a Batman: The Animated Series collection, too. 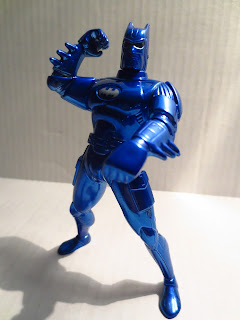 Would you be surprised if I told you that Batman was articulated at the Kenner 5? Of course not!  Batman features swivel hips, swivel shoulders, and a swivel head.  The joints work fine and seem very sturdy, but what is amazing is that the figure has a really, really hard time standing up on it's own.  He does stand well with the flight pack on, as the tips of the wings provide support. 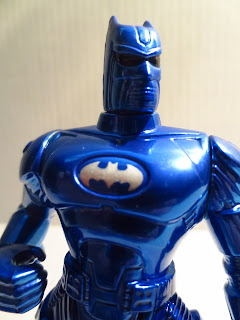 The sculpt isn't bad at all. It's not fantastic, but I guess it is kind of cool. It's a very sleek yet armored look for Batman.  It actually kind of reminds me of the Batman drones from Grant Morrison's Batman Incorporated.  There looks to be a few interesting details, such as cargo pockets on the armor (kind of odd, actually), and some sort of control panel hinted at on his left gauntlet, perhaps to pilot the flight pack.  I like the helmet, as the eyes are actually one large lens, and the mouth guard looks to be a grill of some sort.  It's not bad, although nothing groundbreaking. 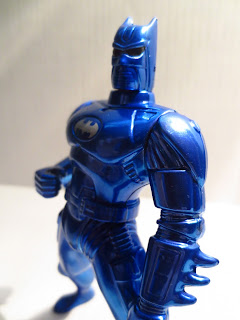 Other than the black lens on his helmet and the silver Bat symbol on his chest, the figure is solidly covered in vac-metalized blue.  It doesn't look bad, but for some reason it just strikes me as being really, really boring. And that's about all I have to say regarding this figure's paint. It's boring.  There's a decent sculpt, and the right mix of colors could have brought out some of the detail, but as it is this figure doesn't do much for me. Sorry, Flightpak Bats. 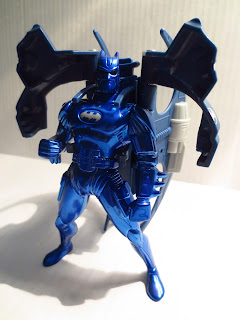 First, like most other Legends of Batman figures, Flightpak Batman comes with a trading card.  Second, he comes with the giant titular winged backpack.  It's bat-shaped wings fit on the figure well, and have a spring loaded action feature: push down on a lever when the wings are back and they snap forward along with two parts of the flight helmet that snap closed over Batman's head and torso.  It's not a bad accessory, but something about it makes me wonder if it was re-purposed from a Batman: The Animated Series figure.  Due to the position of Batman's right arm, it's also awkward to close the flight pack helmet and not get it snagged. 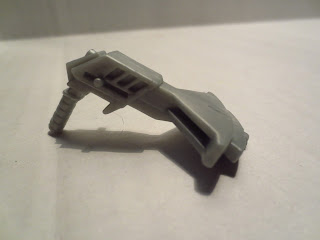 Lastly, Batman comes with a gun of some kind.  Yeah, I know Batman doesn't use guns.  Maybe it's a radar scanner or non-lethal weapon of some kind?  It fits solidly in Batman's right hand and is supposed to be stored in one of the two holes on the wings, but it doesn't want to stay there well. 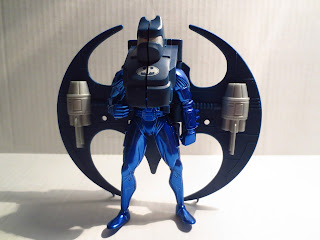 Well, in trying to be a completest on a line, sometimes you get a figure here and there that doesn't do anything for you. Flightpak Batman is one of those figures for me. He's not an intriguing concept, he's not unique, he can't stand unaided, and he's pretty much just a lifeless, shiny figure. I'm giving him an Eh.  There's nothing technically wrong with the figure (other than that he can't stand without his  flight pack) but there's nothing that stands out and makes him worth tracking down unless you're really trying to complete this line.  Confirmed: Eh.