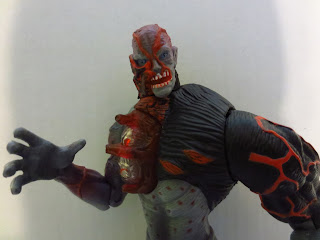 Just like a horror franchise, just when you think Resident Evil Week is done, it comes back for more. I'm down to two figures left to review in order to have reviewed every figure from Toy Biz's Resident Evil line, and now I'm going to knock that list down to one by reviewing the big baddie from the original Resident Evil, the Tyrant.  Designed to be a B.O.W. (Bio-Organic Weapon), the original version of the Tyrant turned out to be a bit of a failure.  Still, that's not to say that the guy isn't popular, as he most certainly is.  Tyrants have become some of the most recognizable villains from the Resident Evil universe, each with their own unique traits, such as the methodical and cool demeanor of Mr. X or the "Kool-Aid Man on crack" intensity of the Nemesis.  This guy, however, is the original. He originated the "walk slowly then strike quickly with a giant claw" that all Tyrant's aspire to perfect. Is he a good figure, however? Read ahead and find out! 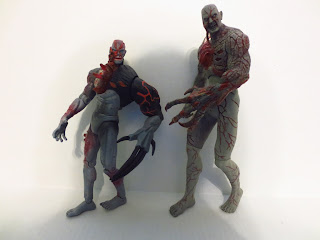 You'll notice that the Tyrant is only one of three figures in Toy Biz's Resident Evil line to not include a second figure: that's because he's 8 1/4 inches tall.  The guy is definitely a monster and looks massive compared with the other figures, but it's a good type of massive. (The other figures are Mr.X/ Super Tyrant and William G-3/ William G-4, in case you're wondering, both of which feature a transforming gimmick). You could probably squeeze this guy in with your Palisades collection scale-wise if you wanted to, but both Palisades and NECA made their own better Tyrants, so there really wouldn't be much point. 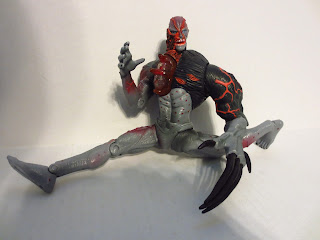 The Tyrant features a fair amount of articulation when you consider the type of figure this is (mass market retail) and the fact that it came out in 1998, but it also has some real weaknesses here.  Tyrant has: hinged ankles, hinged knees, swivel hips, a spring loaded waist, a swivel right shoulder, a ball jointed left shoulder, and hinged elbows.  The leg articulation here is decent, but the spring loaded waist and ball jointed left shoulder are pretty weak.  The intent is supposed to be that the Tyrant can be twisted at the waist and swing his left arm, but the waist spring doesn't work well and the left arm just flops around.  Seriously, the ball joint is loose.  The head doesn't swivel, either, and it's left giving an awkward sideways glance.  Perhaps this is due to the fact that the second action feature on this guy is a that a giant button on his back is supposed to make the blood in his heart pump, kind of like Mosquitor. Mine's all dried up, though, so I can't say how well it worked originally, but it sure don't work well now. Eh... 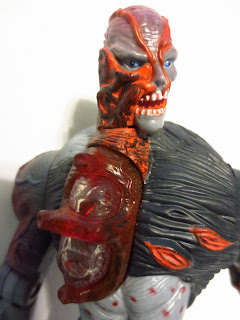 I think the Tyrant might be the most mixed sculpt in the entire line. On one hand, there are some incredible details on this big guy. On the other hand, there are some really poorly done aspects of the figure.  Perhaps it's due to the larger size but the details on the Tyrant just don't look as crisp and intricate as they do on the smaller figures like the Maggot Zombie or the Hunter.  The skin texture is nice and the musculature is OK for the most part, but the veins and the head sculpt just seem really sub par for this line.  I mean, look at that guy's face?  He kind of reminds me of the Bumble from Rudolph the Red Nosed Reindeer, and while I like the Bumble, that look just doesn't work for the Tyrant. I think it's the teeth.  Anyways, it is kind of cool that Toy Biz used clear plastic to create the Tyrant's exposed heart (which always seemed like a weakness for a biologically engineered super weapon) and the tumor (or something) on his right thigh. Still, I'm just really underwhelmed by this guy. 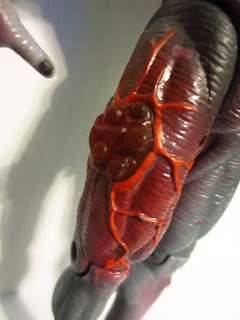 The paint work is pretty good, though, which has seemed to be true with most figures in the line.  Tyrant is molded in a gray plastic that really replicates nicely his color in the game and in promotional art. It also works well with the other colors used such as the various bursts of red and black paint that give shading to key areas of the figure. The paint work, including the veins, scars on his torso, and spots on his abdomen, is nice and clean with some good shading techniques. Too bad the painters didn't have a better sculpt to practice their trade on. 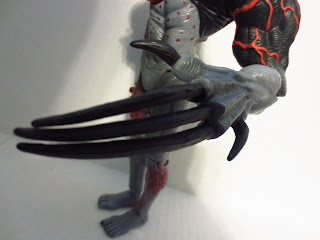 Perhaps it's due to his size, but the Tyrant doesn't come with any extra accessories. A crow or two would have been cool, but nope. None. 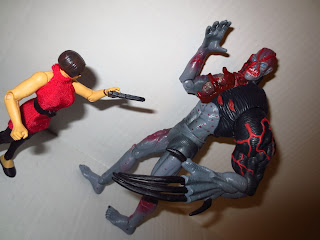 I've owned the NECA Tyrant since it was released in 2007 and have wanted a Palisades Tyrant and Toy Biz Tyrant for quite a few years, but now that I own the Toy Biz Tyrant I'm just not that impressed. It's a large figure alright, but it definitely needed better sculpting and better work done on the action features.  I'm not going to say I hate this figure, but I really don't like it and am giving it an Eh. If you're a huge Tyrant fan trying to amass one of every Tyrant released or simply trying to complete this line, pick one of these cheap. Otherwise, better Tyrants have been released since and would fit much better in your collection.