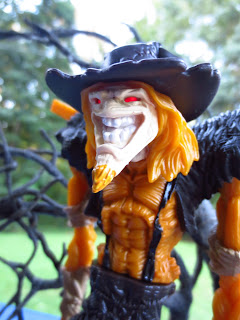 If you want a rundown of a little bit of the history of this line, check out my review of Laughing Gas Joker here.  In order to compete with the growing popularity of McFarlane Toys' Spawn figures, Kenner crafted Legends of the Dark Knight to be bigger, more detailed, and somewhat more twisted than your average Batman figure. Released as part of the first series of figures in 1996, Twister Strike Scarecrow is a gangling, frightening vision of evil in plastic form that might still have a place on your toy shelf, even though he's 18 years old at this point. Prepare for some fear, after the break... 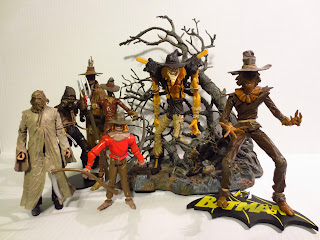 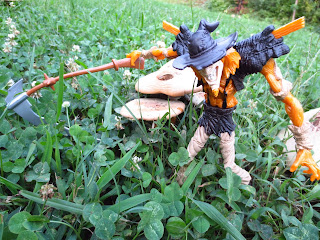 * The sculpt on this guy is just fantastic.  He's twisted, spindly, and just plain evil looking.  Check out that maniacal grin, those sinewy arms, and the creepy, hunched positioning of his neck.  Little details on his costume, such as the barbed wire wrapped around his burlap garments and the two plans of wood extending out of his shirt, really give Scarecrow the look of the farming tool from which he derives his name.  He's quite a terrifying figure, and one of the coolest representations of Dr. Jonathan Crane that I've ever seen. 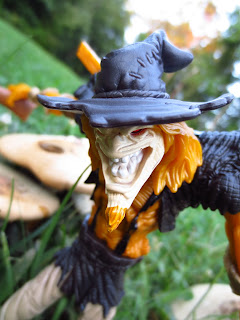 * He's got light-piped eyes that really do give them an eerie red glow. Hidden on the back of his hat is the red plastic square which allows light to beam in and cause his eyes to "glow." Light-piping, when done right, is a really effective technique, and it's definitely done right here. 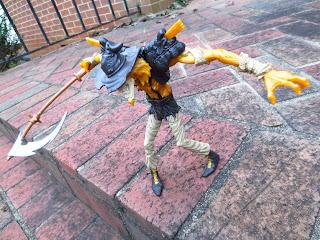 * The scythe is about 6 1/2 inches long with a 4 1/2 inch blade. It's a wicked weapon that works perfectly with the Scarecrow's deranged persona.  The figure actually has an action feature (the titular "Twister Strike") that allows you to manually spin the figure's torso at the waist joint to simulate striking out at his enemies. It's not the best action feature in the world, but it's unobtrusive to the figure's sculpt and looks kind of cool, especially with that scythe that's larger than most Batman action figures. 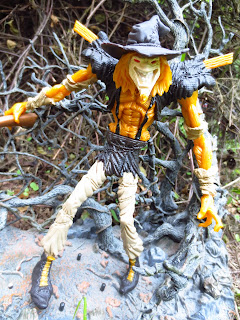 * Despite his gangly nature and awkward stance, Scarecrow has no problem standing up on his own, even with his arms splayed out.  I'm actually impressed by this, as it shows that Kenner worked to give the figure an appropriate center of gravity. 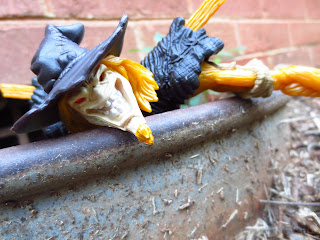 * The biggest elephant in the asylum is that Scarecrow hardly has any articulation.  The shoulders don't swivel, but simply swing up and down away from the body into position.  It's really disappointing from a play perspective, although from a display perspective it does allow the figure to look really dynamic and fearsome on a shelf. 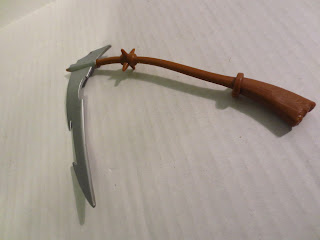 * There are some cool details on the figure, like the barbed wire on his legs and waist and the wood sticking out of his shirt, but none of it is painted.  The wood is the same color as Scarecrow's skin, and the barbed wire is simply molded on in the color of whatever garment it's covering. This guy really could have competed with anything on the shelves when he was released with a few more paint details. I bet a good painter could really bring this figure to life.


Overall:
While I have some complaints, there's no doubt in my mind that this guy was definitely a cool figure upon his release in 1996.  Kenner really took the living scarecrow gimmick of the character and took it to new levels.  While not well articulated, he looks awesome on display and is extremely durable.  I'm going with a Great rating, taking into account the time period when this guy was released. Sculpt wise he was leaps and bounds above most other figures, and his size alone was impressive.  Jonathan Crane has had a few different looks over his long history as a Batman villain (originally appearing in a 1941 issue of World's Finest Comics), but this one might be one of the best. 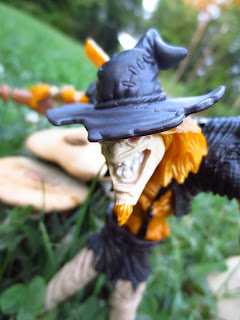 We haven't reviewed any other Scarecrow figures on ThEpic Review yet, but we have reviewed plenty of Batman villains from a variety of lines. We've looked at: Talia al Ghul from Batman: Arkham City by DC Collectibles, The Joker from DC Superfriends Imaginext by Fisher Price, The Riddler from Kenner's Legends of Batman, Laughing Gas Joker from Legends of the Dark Knight by Kenner, and the Hot Toys Bane from The Dark Knight Rises. There have been many other Scarecrow figures released, and while Big Bad Toy Store doesn't have this particular version in stock, they do have plenty of others available to purchase or to pre-order here.