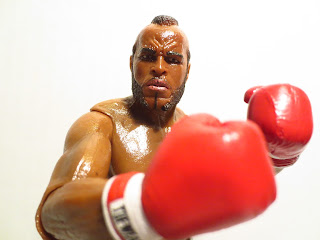 I'm trying a different format for my reviews that focuses less on the traditional categories and more on the high and low points of a figure.  Let me know what you think.- Barbecue17*

First name: Mister. Middle name: Period. Last Name: T. If you're not at all interested in this toy because it's a figure of Clubber Lang, Rocky's opponent from Rocky III, at least you should be interested in this as an action figure of Mr. T. If you're not interested in this as a figure of Mr. T, what the heck is wrong with you?  Mr. T is such an important part of my life that I made sure to schedule my wedding day on his birthday (May 21st, baby!).  That makes it easier to remember my anniversary, because whenever I'm out shopping for a birthday gift for Mr. T, I remember to pick something up for my wife as well.  (**Editor's note:  Wow, that's so romantic.  With that in mind, I'll be sure to have our baby--due any day now--on Aug. 11 so I'll always remember to send Chris Hemsworth a birthday card that day.**) Anyways, NECA did an amazing job on their Rocky line: Unique sculpts, excellent paint, and really well thought out articulation has made these hands down not only the best Rocky figures ever, but also some of the best action figures of last year. Clubber comes in two versions and today I'm looking at the pre-fight Clubber. Take a brief look at a real man, Clubber Lang. He's after the break and he's waiting for you!

Scale: 7 1/4 inches--Perfectly in scale with other Rocky figures as well as other NECA movie figures.

Accessories--None.  (**Editor's note:  Unless you include the pain he predicts for the fight!  Or perhaps pity for the fool, or a bad attitude...**)

*First of all, the sculpt on this figure is amazing. Look at the head sculpt--it's pure Mr.T. Excellent work. Also, not only is the body sculpt super well-done, but its also unique from all of the other characters in the line. The shorts and boots are also unique and look fantastic. This is some of the best work NECA has ever done!  Many toy companies like to reuse the same bodies over and over, so it would be absolutely a shame if NECA had went that route. There's a barbecue joint in my hometown that has a sign that reads "Quality remains long after price is forgotten." My guess is NECA has that sign in their offices, and perhaps someone needs to send some other companies a copy of it.


*Secondly, Clubber has amazing articulation. There's no boxing pose that you won't be able to get this guy into. The articulation not only is well done, but it also is nicely integrated into the sculpt of the figure which is really difficult to do on a figure only wearing a pair of boxing shorts and a look of determination.  This guy is a really durable and fun action figure.  I think you could easily give him to a kid and not worry about breakage (unless the kid hates Mr. T. In that case, you suck as a parent).


*Not only is the paint work excellent (check out the small writing on the gloves) but the plastic is a perfect shade of flesh tone. It has a nice mixture of shine, pigment,and translucency that realistically captures sweaty, human flesh.  NECA has truly excelled in capturing realistic human flesh in a number of their lines recently (Rocky, Predator, Rambo), and I hope they continue to do so.


*Another cool thing I've noticed is that the figures' head and gloves are easily removable. This means that you can probably swap heads and hands with the other Clubber Lang figures NECA has released. Not a big deal for most, but still fun.  No one ever said Mr. T wasn't versatile.

*Ready for this? I have none! This is a perfectly executed action figure that I have no complaints with. None at all! I mean, I can't even think of any accessories I'd give this guy. It's so simple, but so effective.


Overall: NECA's Rocky line was definitely one of my favorite action figure lines of 2012. Each figure is amazingly executed and functions both as a great collector's piece and a fun, well articulated toy. NECA has really been continuously stepping up their game and it shows. Whether you are a Rocky fan, a Mr. T fan, or just a lover of great action figures, Clubber is truly a knockout. I can only say that if you don't buy this figure, my prediction for you is pain! Easily, easily an Epic figure, as I can't figure out a way it could get any better.

I've reviewed one other figure from NECA's Rocky line: Rocky Balboa from Rocky IV with Bloody Spit.  While this line came out last year, Big Bad Toy Store still has a few figures in stock. Check them out here!

*Parts of this review originally appeared on my Amazon.com page earlier this year.