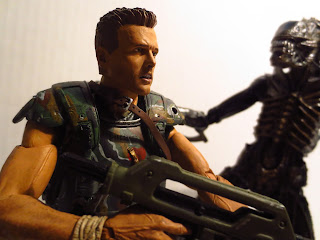 Well, SDCC 2013 has just recently passed and we saw that NECA has some cool upcoming plans for more toys based off of Alien and Aliens. NECA has really gone crazy with their Predator line and hopefully will have the same type of success with the Aliens franchise.  I've already looked at the Xenomorph and Private Hudson from series 1, so now I'm going to finish off the first series with a look at Michael Biehn's character from James Cameron's 1986 sci-fi masterpiece, Corporal Dwayne Hicks.  Corporal Hicks is no stranger to action figures, and has been available in toy form a few times before.  He appeared in Kenner's early 90's toy line four times, including the standard first series figure, a Kay-Bee toys exclusive repaint, a newly sculpted figure for the Aliens: Hive Wars line (that came with a robotic dog), and a Kay-Bee toys exclusive 12 inch version modeled after the film. That figure actually came packaged with a 1/6th scale Alien warrior, as well.  Galoob put out a small version of Hicks in their Micro Machines/Action Fleet line, McFarlane Toys released two versions in their Movie Maniacs line (one without a helmet and a McFarlane Collector's Club exclusive with a helmet and a shotgun), and even Hot Toys released the character as both a 1/6 scale figure and a 4 inch figure.  Dang--Hicks gets around!  Anyways, that wasn't enough Michael Biehn figures for the world, so NECA jumped in to release the finest version of Hicks that you're likely to find.  Stay frosty and alert, and check out the review after the break.... 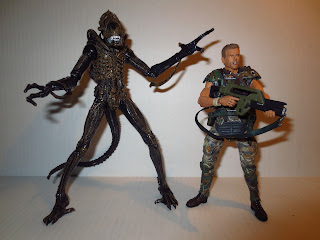 Hudson is right at 7 inches, maybe a hair over.  He's exactly the same size as Hudson, and will easily fit in with the rest of your NECA figures so you can assemble your 80's action Dream Team.  Yup, I have a shelf in my living room that has Dutch, Rocky, Rambo, Hicks, Hudson, John McClane, Ivan Drago, Clubber Lang, the T-800, Apollo Creed, Aliens, Predators, the T-1000, Conan, and Kyle Reese.  Am I missing anyone?  Throw me a Jack Burton from Big Trouble in Little China and John Matrix from Commando and I think I'll be sound as a pound. 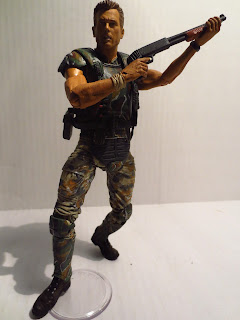 Hicks is extremely well articulated and ready to go on any bug hunt you assign him to. He's got: hinged toes, ball jointed ankles, double hinged knees, swivel thighs, ball jointed hips, ball jointed torso, ball jointed shoulders, swivel biceps, ball jointed elbows, swivel and hinged wrists, and a ball jointed head.  The majority of Hicks' joints are fantastic, giving him an excellent range of motion.  The head and torso ball joints are particularly good.  The only joints that gave me trouble were the elbows and wrists. Because NECA painted on the skin tones, there's a bit of paint in the joints. The wrist joints also feel a bit fragile, so be careful.  I'm impressed by how NECA has managed to hide so many of the joints: the elbows are sculpted to cover the joints, the bicep swivels are up underneath the hanging sleeves, and the knee joints are hidden by the knee pads.  Pretty nice work overall, just be a bit careful with the hands and arms when you first get the figure. 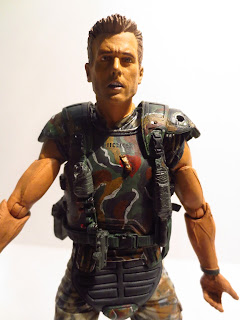 I mentioned this on my review of Hicks, but I'll mention here that NECA chose to use painted flesh rather than molding the figure in plastic that was the same color as the character's skin tone.  It looks just fine on Hicks, but I figured it was worth pointing out since NECA has been so successful with both methods lately.  I'll start critiquing the sculpt by commenting on the head sculpt: it really is a very strong Michael Biehn likeness.  He's not as expressive as Hudson was, but he does seem to be in the middle of some type of Biehn-esque action. My only comment would be that the hair looks a little too thick, but I'm not sure how you'd capture thinner hair in plastic.  Since they're wearing uniforms, Hudson and Hicks share a number of parts--as far as I can tell they share torsos, waists, legs, feet, right arms, and hands.  Most of those pieces are decked out in standard military fatigues; they looked great on Hudson and look good here on Hicks. While Hudson's uniform had rolled up sleeves and a wrap on his left arm, Hicks' uniform is sleeveless, so he has new shoulders and a new left arm.  Where the figures really differ is the web gear.  Hicks' body armor and web gear are completely unique to him. While it would seem that the body armor could be reused, Hicks' armor has a different crotch guard from Hudson's, and features a small sculpted lock over the painted-on heart on his chest as well as the bullet hole on the left shoulder.  The web gear features some shotgun shells on his right side, and different pieces of gear and pouches in different places.  NECA really could have gone the cheap route here and used the same body hoping no one would notice, but they didn't. Good for them and good for collectors. 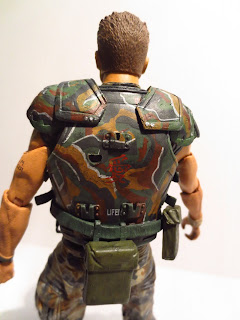 The paint lives up to the sculpt and enhances it. Besides just the camouflage pattern of Hicks' pants, the little bits of wear and tear on elements such as his knee pads and body armor is impressive. Like Aliens, the NECA figures really have a worn and lived-in look to them.  I mentioned in my review of Hudson that his body armor told a story in a way. Hicks' does as well. Across his chest he has "HICKS" stamped in black. Underneath is the above-mentioned lock over a red painted on heart.  On his left shoulder is the bullet hole, written around which are the words "Born Again".  His left shoulder has a very simple tattoo of "U.S.C.M. 527-19-5251"  On his back, there's the partial word "Life--" which disappears under a bracket, and a red Asian character. I couldn't tell you what it means. Most of the actors in the movie got to customize their own armor, but Michael Biehn did not.  Actor James Remar was the original choice to play Hicks and even filmed some scenes before he left the production. He still appears in the movie, but only from the rear so that he's unrecognizable.

Hicks comes fully armed, although he does share a few accessories with Hudson (which makes perfect sense).  Hicks includes: 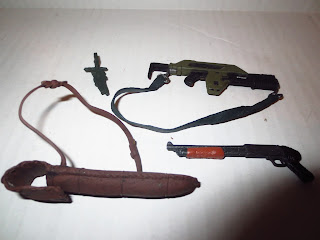 -M41A Pulse Rifle- The standard weapon of the USCMC that was featured heavily throughout Aliens.  Molded in a nice solid plastic and featuring some intricate paintwork, this weapon is dead-on accurate to it's big-screen counterpart.  The sling is made of a rubbery material so that you can easily sling it around Hicks.
-ME3 Portable Welder- Look on the left side of Hicks' web gear and you'll find this little piece. It's actually removable and features a little paint app on the visor the marines look through when welding. Very cool little extra that is easy to miss.
-Ithaca M37 "Stakeout" Shotgun- Quite an antique weapon for a space marine (and supposedly a family heirloom according to Alan Dean Foster's novelization of the film), this is the weapon that Hicks keeps around "for close encounters".  It's molded in a nice gunmetal colored plastic and features what looks like electrical tape on the handle. *Fun Fact*- Michael Biehn's character Kyle Reese also used a version of the Ithaca M37 in another James Cameron film: Terminator.  Perhaps Reese is a descendant of Hicks and this same weapon got passed down for generations. You never know! Generbeener, we need some fan fiction about this right away!
-Shotgun pouch- This is a leathery looking sack that Hicks uses to tote around his shotgun.  It's a well-designed and functional accessory, but be careful with the strap. It looks like it could easily tear, so my recommendation is put it on and leave it on. 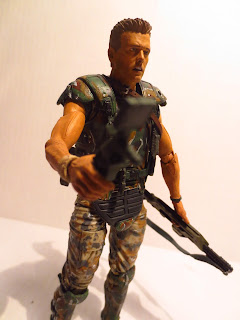 Hicks doesn't come with accessories as detailed as Hudson's, but he still has a fairly substantial complement of gear to use for alien killing fun.  Other than my concerns over the shotgun holster's strap potentially breaking, things seem stellar overall. 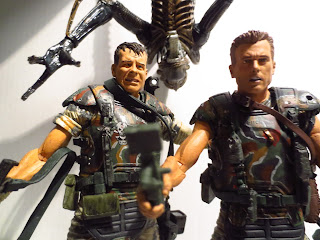 My gosh, I love Aliens so much and really am excited to continue picking up awesome figures rolled out by NECA. I absolutely cannot wait for Bishop next year and really, really hope that Ripley gets revealed at some point.  Hicks is a really good figure. Actually a great figure. Great paint, great sculpting, great accessories, great articulation. The only problem I have with him is the weakness of the strap on his shotgun case as it feels like it could break at any moment, although mine hasn't yet. Still, overall all of those greats easily add up to another Epic figure in this line. Confirmed Epic all the way around!

Want more Aliens reviews?  Well, we've got a few for you:  I've also looked at NECA's Private William Hudson (Bill Paxton's character) and the Xenomorph Warrior.  From the 1990s Kenner lines, I've looked at: the Alien versus Predator 2 pack, the Series 1 Space Marines and the Power Loader, and the Series 1 Xenomorphs.  I've also looked at some of the Prometheus figures from NECA:  David 8 and Deacon.  Big Bad Toy Store has sold out of series 1, but they do have a ton of new Aliens figures available for preorder, including a two pack of a new Hicks figure with an exploding Alien Warrior and series 2 with a "blue" Xenomorph warrior, the alien from the original film, and a new Marine, Sgt. Windrix.