Action Figure Review: The Joker from DC Superfriends Imaginext by Fisher-Price (Confirmed: Eh and a 1/2) 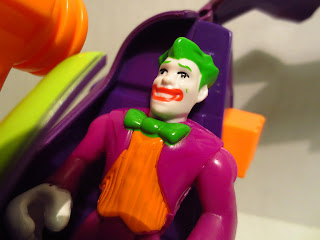 As a collector of Batman stuff, I've actually been pretty impressed with the Imaginext toys. They're really fun, charming, and remind me quite a bit of the action figures of my childhood with their fun accessories and wacky action features. I've recently seen some new Superman figures out, as well, so they seem to still be making these.  While I bought one or two of these for myself, I do realize that most folks are buying these for their kids, so I'm trying to pay attention to some of the elements that I think might be frustrating to the little Bat-fans out there. The Joker is definitely a fun toy, but there are quite a few frustrating aspects to the toy that might diminish your love for it. Join me for a quick look at the Joker, after the break... 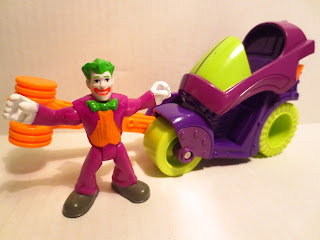 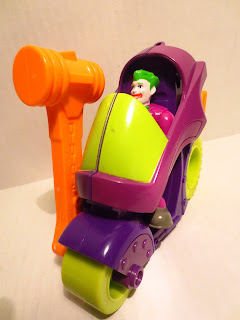 *Regardless of all else, you really do get a fair amount of plastic with each Imaginext figure. I mean, the Joker comes with a fairly large vehicle. The thing looks kinda nifty, rolls well, and has an incredibly fun action feature in the form of a smashing hammer. I think any kid will have fun knocking down figures and other toys with this hammer. It really is quite neat and gives the figure some great play value. 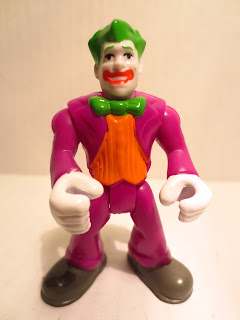 *The Joker looks pretty good, although to some extent he actually just looks like a regular, friendly guy in a Joker costume. Perhaps that makes him even more creepy. I'm definitely amused that this sadistic Batman villain is available to kids everywhere, which either says a lot about the popularity of Batman and his roster of villains or that little kids are into some messed up stuff.  Maybe both.  Anyways, he is quite fun and quite instantly recognizable as the clown prince of crime. 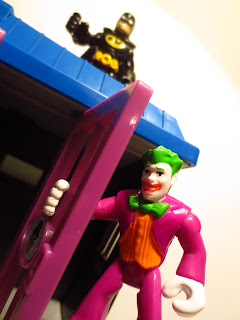 *The Joker figure bothers me a bit because the purple on his torso is different than the purple on his arms. While it's all supposed to be one suit, it looks like the dry cleaners might have messed things up the last time the Joker sent the suit in to be laundered.  This happens sometimes when companies either try to match the color of molded plastic to paint or when two different types of plastic are used on different parts of the figure. It still looks weird, regardless of the explanation. 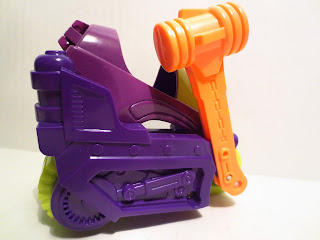 *Getting Joker into his vehicle is a bit difficult, even for me. His slightly large feet are hard to get in and out of the vehicle and the door which holds him in is really tight and hard to get open. Lots of folks have mentioned the door falling off easily, which I could see happening after lots of play. Just something to be aware of, especially if you're buying this for a kid. 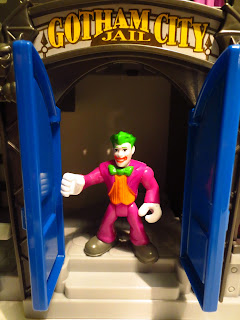 Overall:
Every kid playing with Batman toys is going to want the Joker, as will every collector. While this is a great option, there are other options as well. Joker comes in a few different sets and with some different vehicles that might be sturdier. Still, the hammer smashing mechanism is fun, and I'd recommend leaving the Joker in this vehicle and getting the kid a separate Joker figure to play with from another set. Might be the best way to handle this.  Overall, I'm giving the set an Eh and a 1/2, as there are definitely better options available to get the same figure in a less frustrating manner.

*Portions of this review appeared on my Amazon.com page earlier this year.