Action Figure Review: Jungle Disguise Dutch from Predator by NECA (Great and a 1/2) 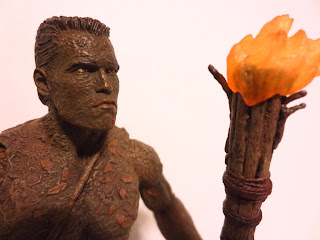 This is the figure I've been waiting for!  While the other Dutch figures in various states of undress are undoubtedly cool, it's this figure of Major Alan "Dutch" Schaefer covered in mud and leaves that really captures the primal warrior versus warrior spirit of the original Predator.  When Dutch realizes that the cool river mud camouflages him from the Predator's thermal vision, he finds a way to potentially beat the ultimate hunter at it's own game.  Including this figure, Jungle Disguise Dutch, NECA has now released four figures of the character and looks to have two more on the way considering what we saw at SDCC 2013.  Ready for a look at this guy?  Let's jump right in, then, and get things rolling. 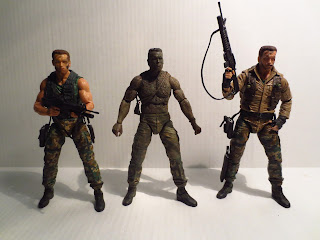 Dutch comes in at 7 inches tall and has that super realistic style to it, which NECA is so good at, that makes him look like he just jumped off of the silver screen.  I've probably mentioned it in the other Dutch reviews, but he looks excellent in scale with most other NECA heroes and the multitude of Predator figures.  While there are certainly elements of Dutch that are reused from the other Dutch figures, it's amazing how much new sculpting there is.  What's reused from other Dutch figures?  Everything from the waist down is reused, which makes perfect sense, as well as the lower arms.  The hands are all new, though, to grip the new more primitive weapons. 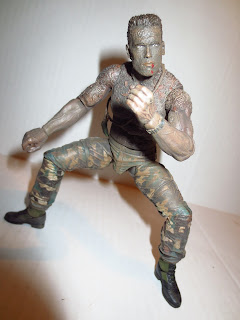 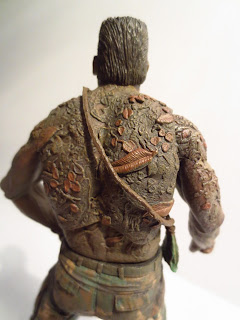 If you want to read more about the lower body, you can read about it over on my review of Jungle Extraction Dutch as this part of the body is reused.  The torso, upper arms, and head are all new however, and are very effectively covered with mud and leaves, just like at the end of the film.  This really and truly doesn't simply look like someone painted, but like someone literally covered in mud and leaves. NECA's execution of this camouflage is such an extremely effective technique that really showcases some of their best sculpting ever. Heck, the head sculpt manages to not only capture the look of a steely Schwarzenegger on the hunt, but it adds in the extra layer of sculpting on top of it.  The figure just looks awesome and really, really unique. My only issue is that the reused bare lower arms from other Dutch figures certainly do not have the awesome muddy details that the upper arms do, and it is noticeable when you look at the figure for a few minutes. 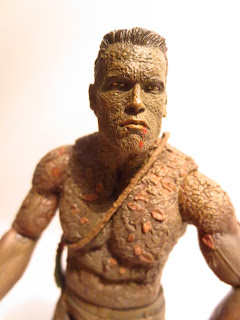 Paint is so important for this figure, and NECA manages to come through once again.  The figure truly looks as if it's covered with mud, which is really an impressive look. It's easy to add brown paint apps; it's much harder to truly make a figure looks like it's actually covered with mud and debris.  All of the little details are painted to add to the realistic vibe. I particularly like how the camouflage pants look soiled and dirty. Plus, look at the head sculpt. Not only do we get to see the white, steely gaze of Arnold's glare, but we can also see some blood running down his chin. Simply perfect. 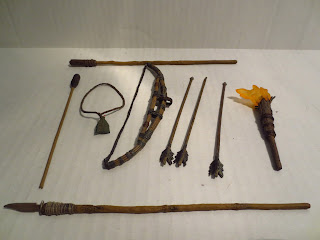 Dutch comes loaded with weapons, none of which are reused from any of the previous figures.  First, he comes with a torch.  It's sculpted to look like wood, and features some incredible detail and a translucent orange plastic flame. Great for the pretend lighting of your pretend bonfires.  He also comes with two spears, including one that's made out of his knife (the same smaller knife that came with Jungle Extraction Dutch, Jungle Patrol Dutch, and Jungle Encounter Dutch). It's definitely supposed to be the same knife, but it's a completely new sculpt (and a great one at that).  Finally, Dutch comes with his handcrafted bow with three arrows.  The bow even has a rubbery string, although be careful with it: I imagine if you tried to shoot it more than a few times, it'd snap.  The arrows, the bow, and the spears are all sculpted really well and feature multiple, excellent paint apps, and are made from a nice, solid plastic.  Dutch also comes with a satchel made from leaves that's on a vine that can easily be removed, so that's another additional extra. 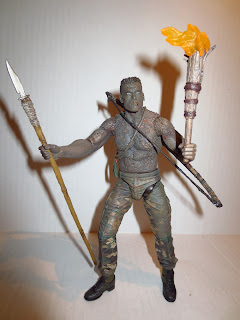 Jungle Disguise Dutch is another fantastic figure from NECA. The only complaint I have is about the reuse of the bare lower arms, which definitely don't look as good as was probably intended.  Still, this figure is pretty awesome and fun, no matter how old you are. This guy could really blend in to the jungle if you dropped him on the ground, so be careful!  Perfect paint, weapons, and sculpting really make me completely excited to pick up any future Predator figures NECA puts out. Easily a Great and a 1/2 here.

I've reviewed a few Predator pieces from NECA including Jungle Extraction Dutch , the Toys R Us exclusive Jungle Hunter and City Hunter Predator 2 pack , Jungle Patrol Dutch, the Predator Limited Edition Trophy Skulls Collection , and of course the Predator 2 Trophy Wall diorama.  If you're interested in something a bit more old school, I also looked at the Alien versus Predator 2 pack that Kenner put out in the 1990s.  Big Bad Toy Store has the Trophy Wall in stock for $64.99, which I happen to think is a really good price, especially for a product this impressive and huge.  Big Bad Toy Store has a wide variety of Predator figures in-stock, so head on over there and pick yourself up something nice. You deserve it.