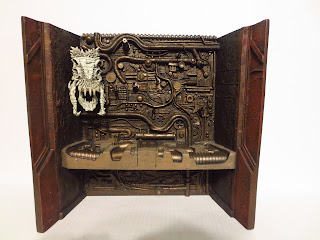 A limited edition of 5000, the Predator Trophy Wall Diorama is absolutely one of the coolest toys/ display pieces I've ever seen.  I don't usually do video reviews, but I did one just for this set because #1) I wanted to gush about this piece in person and #2) I wanted you to be able to see how big this thing actually is.  NECA has been quite prolific with their Predator line so far, releasing a plethora of Predators from Predator, Predator 2, and Predators as well as figures from the fan film Batman: Dead End and figures based off of the Kenner toy line from the early 1990's, but a diorama of this magnitude is completely above and beyond anything I expected to see.  The scene at the end of Predator 2 features the appearance of not just the Lost Tribe of Predators but also the appearance of a Xenomorph skull from Aliens.  While Alien and Predator had first come together in a three part comic in Dark Horse Presents #34-36 in November 1989, Predator 2 really got fans speculating.  Remember that this set only comes with one skull, the "T-Rex" skull, so if you want the others you'll have to track them down individually, or you can order this limited edition Trophy Pack from NECA.  If you're reading this, you probably know all the details about the series, so let's jump right into the review: 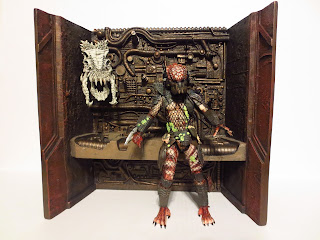 The diorama is just a hair under 11 inches tall, 11 1/2 inches wide, and 4 3/4 inches deep.  It's done in an incredibly realistic style that would look great with nearly any science fiction or horror toys in a variety of scales, granted it's absolutely intended for your NECA Predators.  It's absolutely not a toy, though, as it's made from a very heavy material, probably polystone.  This is definitely the kind of collectible that you find a nice place to display it, like a statue or a bust.  Other than being able to add and remove skulls and inserting the trophy holders (there are 9 little pieces that fit onto the wall and allow the trophies to be displayed) there aren't any moving parts.  There are, however, some little foam stickers on the bottom to help keep the piece from rubbing against the surface you display it on. 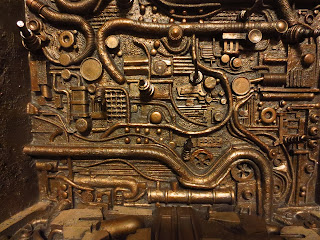 Not only is the size of the piece impressive, but the sculpt is breathtaking.  Watching the scene over and over, I'm amazed by how well NECA captured all of the detail in this set.  Now the sides and the back of the diorama are simply flat and smooth, but I'm not sure why anyone would expect them not to be.  It's the centerpiece that's most impressive.  The walls on the sides have such an interesting stone-like texture to them and the rear wall is covered with tubes, gauges, gears, and other bits and bobs. 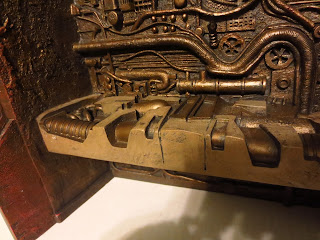 There's so much detail that it's hard to write about--it looks excellent and is very cleanly sculpted.  It nicely complements the full wall of skulls without looking so busy so as to take away from them.  The "workbench" part is solid and features plenty of room to place any other skulls, weapons, or artifacts you want your Predator to display. 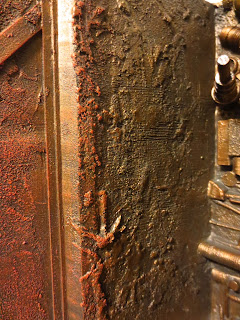 A great sculpt warrants great paint, and this piece is no exception.  The paint work isn't super detailed, but rather a blending together of different shades of copper and bronze that make the wall and all of it's details come to life.  Once again, I think it's so complex that words fail to express the coolness this thing just oozes, so I'll simply say look at the pictures or watch the video on this one. 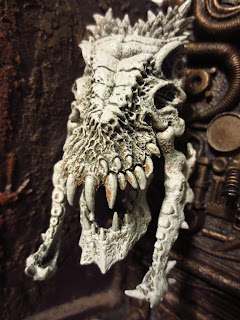 The only true accessory the set comes with is one of the skulls, the giant "T-Rex" skull. This isn't really the skull from an earth Tyrannosaurus Rex, but some alien creature. It's a really impressive accessory that's about 4 inches long and features some fantastic sculpting.  This thing also looks like it had a set of mandibles around it's mouth. It's molded in a grayish white and has a dark wash to make it look aged.

There are also the 9 little attachments that snap into the wall which hold the various trophies.  They're painted to match the wall and are cast in a hard plastic. They seem sturdy enough, but do be careful fitting them in. They're all designed to fit a specific way so don't force anything--just rotate the pieces gently until you find out how they fit properly.  Every piece fits its intended trophy perfectly except the larger skull that came with the Toys R' Us exclusive battle damaged Jungle Hunter and City Hunter Predator 2 pack.  The larger skull (which I call "Underbite") is supposed to fit on the peg on the top right of the base, but the peg is a little thinner than the hole in the side of the mouth where the peg is intended to rest.  It's definitely an oversight, but one I easily remedied by putting a little air hardening modeling clay in the hole and attaching the peg.  If you're patient, you can definitely get it to stay just fine (I didn't use the clay when I shot the video) but for long term display, you'll want to figure something out. 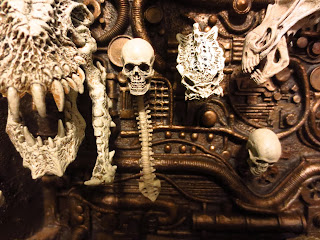 Sometimes you open a toy or collectible and are just impressed you with it's size, it's detail, and it's overall coolness. There's not a specific aspect of the piece that jumps out at you, but it's just the overall appeal of the product. It almost has an aura that exudes Epicness in it's purest, most savage form.  That's this piece. When you pull it out of the box, you'll be blown away by just how heavy this thing is. Once you put the trophies on, you'll be astounded by realizing how badly you've wanted this toy but never knew you wanted it. I'm going to have to call Mr. Spock out here: this is a time, for me, when having is much more pleasing than wanting. Confirmed: Epic.  Now, NECA, I want figures of Danny Glover, Gary Busey, and Bill Paxton from Predator 2! 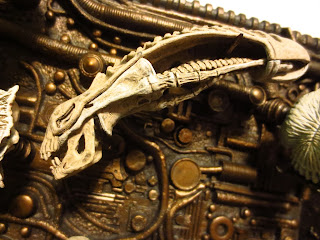 I've reviewed a few Predator pieces from NECA including Jungle Extraction Dutch , the Toys R Us exclusive Jungle Hunter and City Hunter Predator 2 pack , Jungle Patrol Dutch and the Predator Limited Edition Trophy Skulls Collection that I mentioned above.  If you're interested in something a bit more old school, I also looked at the Alien versus Predator 2 pack that Kenner put out in the 1990s.  Big Bad Toy Store has the Trophy Wall in stock for $64.99, which I happen to think is a really good price, especially for a product this impressive and huge. 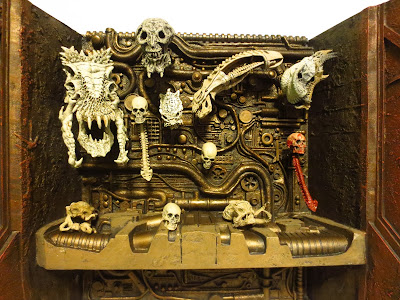 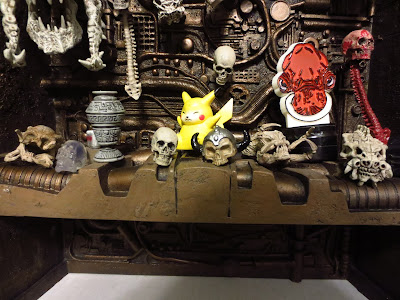