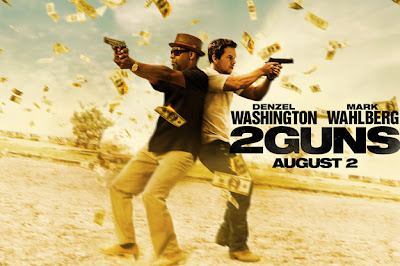 From the man that brought you Contraband!

There was a time in Hollywood when the name Denzel Washington really meant something as the Academy Award winning actor put out hit after through the late 90’s and early 2000’s.  Versatile hits from Remember the Titans to Training Day made Denzel not only one of the best, but also one of the most marketable actors in the business.  Recently, however, Washington has had a run of flops (The Book of Eli to Safehouse), usually followed by a good film like Flight or Unstoppable in between, resulting in a very uneven feeling for the Denzel brand.  As for Wahlberg, his career has been pretty steady about putting out films that vary from crap to mediocrity, somehow making him one of the most overrated stars in the business (*Do you know why people love Mark Walhberg? 3 words: The Big Hit- Editor*). Put the two together and you get 2 Guns from director Baltasar Kormakur, who directed Mark Wahlberg’s last debacle earlier this year: Contraband.  So did 2 Guns come out better? Find out after the break…… 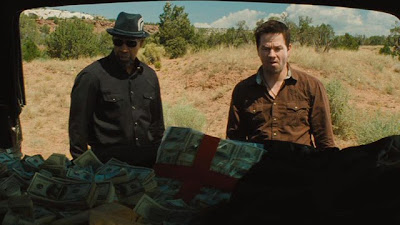 There is only one reason Denzel did this movie with Marky Mark.
I'll give you one hint: it's in the back of this truck.

Since it is really hard to call 2 Guns a coherent film, the answer would have to be no.  Basically all 2 Guns amounts to is an ego contest between Denzel and Wahlberg for a nearly unbearable 1 hour and 49 minute running time.  I guess this was Baltasar’s way of trying to hide the fact that this film literally does not have a plot.  The film boasts a series of sub plots and plot twists which are very ineffective due to the film's lack of a core narrative.  This leads to scenes like an idiotic game of chicken between Wahlberg and Denzel in the middle of the film for absolutely no reason other than the fact that someone somewhere thought it would be a cool scene. 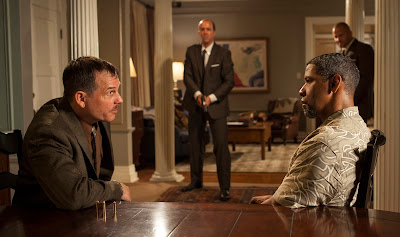 As far as the performances in 2 Guns, Denzel and Wahlberg display some of their typical wit and charm, or in Wahlberg’s case lack of, hoping audiences will eat it up and in return ignore the missing presence of an actual story in the film.  The results are Denzel’s continual tarnishing of his once great brand and Wahlberg's choice to simply cash checks rather than act.  As for the supporting cast of 2 Guns, there really isn't much to see aside from walking, talking action movie clichés. 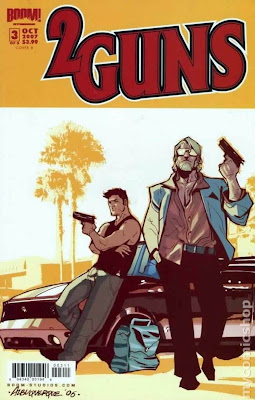 Thanks to the film, I doubt many people will
be interested in checking out the 2 Guns graphic novel!

In the end you can’t really blame Denzel or Wahlberg for doing a film like 2 Guns because it's the type of film that audiences will pay to go see, and for that reason studios will keep making.  However, that doesn’t make it wrong to want something more out of an action film than the half-hearted graphic novel adaptation that 2 Guns is.  It’s just sad to see a talented actor such as Denzel Washington waste his time making films like this when we know what the man is capable of. As for Wahlberg, at this point in his career it seems these are the type of cash grab crap roles he was born to play!