Movie Review: You're Next (Confirmed: Great) 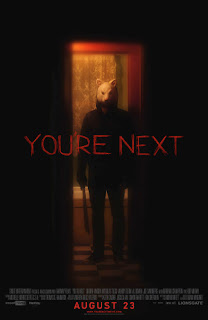 Family reunions and wedding anniversaries typically serve as the backdrop for family comedies, romances, or "very special episodes" of sitcoms.  In Adam Wingard's You're Next, however, they serve as the backdrop for a brutal massacre.  It's definitely a family get-together that puts even the travesties experienced by the Griswold's to shame.  You're Next falls into the sub-genre of the "home invasion" horror film, and rather than ghosts, ghouls, or goblins,  presents it's horror through the terrifyingly visceral experience of a family being systematically slaughtered in their home by assailants unknown.  It's a tense, well paced film, and if it weren't for Evil Dead, You're Next would easily be the most brutal, bloody, and fun horror movie released this year.  Is You're Next a film worth your time, or would you be better served to skip over and see the next film on the marquee?  Read on and find out in this mostly spoiler free review, after the break....

You're Next begins with a fairly simple premise: a well-to-do couple preparing to celebrate their 35th anniversary are hosting a family get together with their four adult children and their respective significant others.  Having recently retired from a posh job with a defense contractor, Paul Davison and his wife Aubrey (Rob Moran and Barbara Crampton) have purchased a beautiful old mansion in the countryside which they plan to renovate as a post-retirement project.  As their children begin arriving, there's a mixture of joy and tension amongst the siblings.  There's the eldest son Crispian (A.J. Bowen), an academic who brings along his girlfriend and former student Erin (Sharni Vinson), slightly obnoxious Drake and his wife Kelly (Joe Swanberg and Margaret Laney), only daughter Aimee (Amy Seimetz) and her documentary filmmaker boyfriend Tariq (filmmaker Ti West) and youngest son Felix (Nicholas Tucci) with his goth girlfriend Zee (Wendy Glenn).  Once everyone arrives and is settled, the anniversary dinner begins.  Then the horror starts as a crossbow bolt shatters a window, and the family's sense of security as well, leading to a night of sheer terror in a house with which they are largely unfamiliar.
Harkening back to other films in the "home invasion" sub-genre such as The Strangers, The Last House on the Left, and High Tension, as well as non-horror films like Assault on Precinct 13, Panic Room, and even Home Alone, You're Next preys on the fear of being assaulted in a place where we are supposed to feel safe and secure.  What happens to the Davison family is shockingly incomprehensible to them; why would someone want to harm their family during a simple dinner?  While the film was premiered at the 2011 Toronto International Film Festival, it feeds right into the current fear in the United States of random attacks upon innocent groups of people.  It's also manages to be extremely cathartic.
Yes, it would be easy to fill a movie with scenes of an innocent family being helplessly slaughtered.  Some people would go for that, although I would personally imagine it would just be too stressful and grim without any sense of fun.  You're Next opts to take the approach of some of the films named above and others such Die Hard or The Descent in raising up a character who chooses to fight back, quite effectively I might add.  Without spoiling too much, one of the characters rises up and proves to have an unusual set of skills that give the invaders more than they bargained for.  Rather than being an all out slaughter fest, the film almost becomes more of a cat and mouse game between the family and their assailants. This is what helps the movie go from being just gruesome to also being enjoyable.  While we might see awful things happen to the protagonists, a good move or a betterment of the situation on behalf of the protagonists gives us a little bit of hope and something to cheer about.  About halfway through, I would argue that the movie becomes more of a thriller than a horror film, but it still retains horror film sensibilities and tropes, typically for the betterment of the film.
The film is really aided by two things: the score from Mads Heldtberg and the strong performances of most of the cast.  First, let's talk about the score- it uses ambient music to great effect with an almost John Carpenter-like precision to build suspense and highlight the most crucial and tense moments.  There's also one song in the movie, "Looking for the Magic" by the Dwight Twilley Band, that is wonderfully utilized throughout the film during some of the key moments.  Much like the way Quentin Tarantino forever tied Stealers Wheel's "Stuck in the Middle With You" with Mr. Blonde's torment of Marvin Nash or "Singing in the Rain" can never be distanced from the Malcom McDowell's Alex from A Clockwork Orange, "Looking for the Magic" will forever give you the creeps due to it's role in the film.
I mentioned above that the film has a strong cast.  While most cast members don't get too much time to shine, I didn't notice any weaknesses in the ensemble and felt that their interactions early in the film added some much needed gravity to the events that ensue later on.  Standouts include A.J. Bowen's Crispian as the intellectual eldest son who's also incredibly sensitive and soft, Joe Swanberg's Drake who manages to be obnoxious and endearing simultaneously, Wendy Glenn's Zee, who delivers some delightfully weird and dark lines later in the film, proving that she's not just a surface goth girl, and most of all, Sharni Vinson's Erin.  The less you know about her before entering into the film, the better, but just know that she really is a knockout and carries this film.
Overall, I'm rating You're Next as Great. Believe me, this film is not going to be everyone's cup of tea. It's violent and startling with a sense of humor that's as black as a moonless night and an underlying awkwardness that makes the audience immediately suspicious of anyone and everyone. It's also an exciting and fun ride that's sure to cause your muscles to tense up as you wait to see what's next.  While it has a few plot twists that you might see coming, it also had one or two moments that are truly surprising.  If you're idea of a good time is a game of cat and mouse with copious amounts of blood, You're Next might need to be the next film on your "movies to see" list.