Netflix for the Poor Kids: FDR: American Badass! (Good and a 1/2) 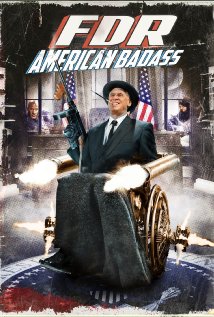 FDR: American Badass! tells the story of Franklin Delano Roosevelt (AKA: The Delano, AKA: Wheels of Steel, AKA: Big Papa Juicemaker) as he comes to terms with the loss of the usage of his legs due to polio and the strains this put on his marriage to Eleanor Roosevelt during his first three terms as President of the United States.  Covering such significant events such as Roosevelt contracting polio through a werewolf bite, his first election as President, and his triumphant one-man attack on Normandy, FDR: American Badass! gives us a robust and yet intimately personal look at the werewolf fighting 32nd President of the United States.  It also features a werewolf Adolf Hitler, a gatling gun wheel chair, and a drug-induced visit with the spirit of Abraham Lincoln.  This is an over-the-top and offensive comedy that's sole purpose is to make you laugh and cringe in equal measures. Want to learn more? Check it out after the break....

As you can probably tell from the introductory paragraph, FDR: American Badass! is sheer over-the-top craziness with a mixture of historical fact.  It certainly can be regarded as part of the deluge of horror and history mashups that have been spawned by Seth Grahame-Smith's Abraham Lincoln: Vampire Hunter, but I do have to say that while it has the appearances of a very cheaply done cash in, I think it offers more than most others. While the movie certainly takes many historical "liberties," it also shows that some amount of research was done, and there are some funny little snippets and references that will make history lovers either grin or cringe, depending on how they feel about a movie playing loose and fast with the rules. I particularly enjoyed FDR's fireside chats.
What seals the deal in making this movie actually humorous is that the film does have some very good actors in it who play things serious enough to be convicning, but tongue-in-cheek enough that we know they're in on the joke.  Barry Bostwick (Brad Majors from The Rocky Horror Picture Show) really and truly plays a very good FDR.  Look at some pictures or listen to a recording of the real President Roosevelt and you can see that Bostwick truly did a very good job of capturing Roosevelt's essence, even if that essence was channeled into crass comedy.  I honestly would love to see Bostwick take a stab at playing a serious FDR, as he seems to have the acting chops for it.  Other actors who contribute to the strength of the film include Bruce McGill as FDR's assistance Louis and character actors Lin Shaye (as Eleanor Roosevelt) and Ray Wise (as Douglas MacArthur, referred to as Dougie Mac by FDR) definitely can handle the bizarre and often offensive humor, passing it off in a way that comes across as--I don't know, is charming the right word?  Charming and sincere.  Throw in a special appearance by Kevin Sorbo as the ghost of Abraham Lincoln and you actually have a solid cast that elevates the movie's enjoyability greatly.
As I mentioned earlier the movie revels in being offensive.  If you're easily offended, this film may not be for you.  It's indiscriminate in it's targets and certainly tries to play into the culture and rampant stereotypes that would have been present in the late 1930's. Other times, there are some scenes that go on far too long. While at first the idea of a werewolf Hitler, Mussolini, and Hirohito having telephone conversations with atrocious accents is funny, it wears thin quickly.  Elements involving characters other than the Roosevelt's and the Whitehouse crew make you realize that the strength of the movie is really dependant more so on their acting talents rather than the strength of the script.
This is a hard movie to recommend, as I know many people won't like this movie.  It's an entertaining move if you like low budget schlocky movies, but I realize that not everyone does.  Let me put it this way: if the idea of a film about Franklin Delano Roosevelt fighting werewolves with a high-tech wheelchair, taking a drug fueled over the capital with the ghost of Lincoln, and debating the merits of his hot tub committee with MacArthur, Eisenhower, and Churchill, you''ll probably enjoy it. If not, then stay away! The history/horror genre is a crowded mess at times: this is one of the better ones.  For the type of movie it is and what it sets out to do, it's easily a Good and a 1/2. Some better editing and perhaps a tighter script could have propelled this higher, but really the movie is dependent on Bostwick's solid and irreverent portrayal of one of the greatest American Presidents, Franklin Delano Roosevelt.