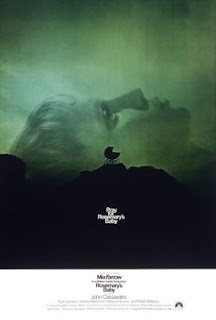 Last weekend I was discussing ThEpic Review with a friend and talking about my desire to review more schlocky horror movies on Netflix, especially over the next couple of months as we work our way towards Halloween.  She commented that it wouldn't be too difficult to find more terrible horror movies on Netflix, since that's all they seem to have.  Not true, I stated, as every time I turn on my instant queue I see Rosemary's Baby available to watch.  Rosemary's Baby is considered to be not just a classic horror film, but a true turning point in the genre.  Released in 1968, Rosemary's Baby represented a new direction for horror films that focused less on aliens, gothic castles, and mad scientists, and more on the horrors that could be found right at home when the modern world crashed together with primitive and demonic powers.  Watching a modern horror film like Paranormal Activity or Insidious that relies on terrifying events happening in mundane urban and suburban locations, you're exploring ground that was largely discovered by Rosemary's Baby.  Directed by Roman Polanski and starring the fantastically talented Mia Farrow as the titular Rosemary, Rosemary's Baby is a classic, it's available on your Netflix, and it's very, very good. Can I say anymore? Absolutely--after the break, of course...

I will admit that I read the 1967 novel by Ira Levin (which Polanski faithfully interpreted for the screen) a few years ago, prior to seeing the movie.  The novel is definitely worth reading, as it manages to be a bit more mysterious than the movie, although both have their fare share of menace and, of course, the book doesn't have Mia Farrow. One late fall evening when I was reading the book, I dozed off in my chair. When I opened my eyes, I was startled by a large pair of black eyes staring right at me.  After a brief shout, I realized that it was one of my dogs, Canoe, coming to see what I was up to. It freaked me out a bit, though.
Now that I've told you an amausing story that I hope captivated you, I'll dish very briefly on the plot (although I'd be shocked if you weren't at least familiar with it in passing).  Rosemary Woodhouse seems to be your average young wife: she's excited about having children, adores her struggling actor husband, Guy, (John Cassavetes), and is thrilled by the opportunity to move into the Bramford, an older, but still luxurious, apartment building.  Upon moving into the Bramford (despite learning about the building's sordid history), Rosemary and Guy soon find themselves being doted upon by the building's population of older residents, especially Roman and Minnie Castevat (Sidney Blackmer and Ruth Gordon).  While Rosemary has to acclimate to invasive neighbors, bizarre noises, and the overnight success of her husband's acting career, she's met with the pleasant news that she is pregnant with her first child.  But something keeps telling her that things are not right, and soon she comes to believe that there is a conspiracy against her and her unborn baby.
While Rosemary's Baby features some terrifying moments, what really makes it effective is the slow-building paranoia and menace that escalates during the film.  What initially seems like an ideal situation soon becomes a disaster that can be seen coming, but cannot be prevented.  As Rosemary begins to lose the life she wants and to grow concerned about her unborn child, Farrow masterfully conveys Rosemary's struggle, both emotionally and physically.  Rosemary deals not just with the outside forces of the building's residents whom she believes are conspiring to harm her, but with the physical and emotional fear of what is happening inside of her.  When we find that Rosemary cannot even trust her own husband, whom she believes has raped her in her sleep, we realize that Rosemary is a woman with nowhere to run and no one to help her.  The movie plods along towards a horrific, yet inevitable, conclusion.
Overall, I would rate Rosemary's Baby as Epic. It's a movie that still manages to disturb viewers and utilizes it's 2+ hour running time to full effect to create an atmosphere that steadily grows more oppressive as the film goes on.  It's not bloody, violent, or overt in it's horror; it simply suggests to viewers a few disturbing ideas and lets your imagination do the rest, and sometimes that's the best way to go.