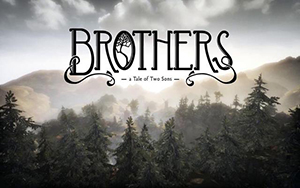 Brothers: A Tale of Two Sons is a beautiful dark fantasy game with an interesting gameplay gimmick that proves to be not only unique, but eventually indispensable to the game's major theme.  Before playing the game, I really wasn't sure what to expect from it.  Dowloading the demo gave me a glimpse of the unique gameplay concept of simultaneously controlling the titular the brothers independantly and intrigued me enough to invest the 1200 Microsoft Points (about $15) in the game. I'm glad I did; while it isn't terribly long (maybe 3 - 3 1/2 hours), Brothers is an incredibly rewarding experience that will bring to mind other minimalist adventure games like Ico, Heart of Darkness, Limbo, and Shadow of the Colossus.  For gamers looking for something a little different with a compelling story (even if it's told without understandable dialogue), Starbreeze Studios' Brothers: A Tale of Two Sons is certainly worth a look. More details after the break....

The game tells the tale of two brothers, a younger brother and an older brother, who set off on a quest to obtain the "Water of Life" from a magical tree to aid their dying father.  While the game begins in their home village, once they leave the surrounding region the brothers soon find themselves in a variety of mysterious and dangerous places.  Hands down the most impressive and appealing aspects of Brothers are the atmosphere and the method of storytelling used.  Some gamers have commented that the game's character and level designs feel similar to Fable; I wouldn't disagree with that statement, but I would add that the atmosphere feels much more mysterious and foreboding than the world of Albion.  While the world is comprised of many standard fantasy settings, there are a great deal of unique aspects to each area that breathe new life into the quest.  While the game's characters use no dialogue that the gamer can understand, as the game progresses you'll begin to realize that you're following along with a very powerful tale despite not understanding the words.  It's a very intimate tale of survival and discovery in a world that turns out to be far more cruel than you initially expect.
The gameplay is very simple and linear, but uses the rather interesting mechanic of having the player control both brothers at the same time.  The older brother is controlled via the left half of the controller and the younger with the right half.  The control scheme is quite simple, as the joysticks move the respective brother while the left and right triggers serve as the respective action buttons.  Most actions are context sensitive:  for example, running at a ledge causes the brothers to jump.  While pushing the action button next to a person causes the brother to speak to that individual, pushing the action brother next to a small animal might cause the brother to pick it up and carry it.  The game is very linear with limited opportunities for true exploration, but fortunately every environment you pass through should captivate you on it's own.  Still, there were times where I wished for areas that were a bit more open for some real exploration.  The puzzles aren't terribly difficult, and shouldn't prevent anyone from completing the game.  It'll take you some time to get accustomed to controlling two characters at once, but once you do the control is very responsive and tight. I found that the few times I died during the game were as a result of not understanding what I was supposed to be doing and not due to the control scheme.
The graphics are quite beautiful and enchanting. Starbreeze certainly wasn't setting out to push the limits of the X-box 360 by any means, but the graphics have a fairy tale like quality to them, almost dreamlike at times.  The brothers are always easy to recognize on screen, something which is important when you have two characters that you're controlling simultaneously. There's not a single area in the game that wasn't graphically interesting, and areas like the giant's home, the first city you enter, and the battlefield are impressively rendered and designed.  This is the type of game you'd probably enjoy watching someone else play almost as much as you'd enjoy playing it yourself.  The music complements the environments, and has a very rich beauty to it.  The dialogue is fairly sparse, and comes in the form of a language I don't understand and that I'm assuming is fantastical. Over time, you might begin to think you're learning bits and pieces of it as the brothers cry out to each other from time to time.
As I mentioned above, I imagine the game will take most gamers about 3 to 3 1/2 hours to complete.  That's not a very long game, but then again you're only paying a 1/4 the price of your standard newly released video game.  While some games revolve around constantly perfecting your skills at a particular style of game play (think most multiplayer games, sports games, etc.), Brothers is more about giving the gamer a particular experience. That being said, unless you're wanting to go back and experience the story over in the future, I think two play-throughs is about all this game has to offer as far as experiencing new content: once for the initial play through and once to gather any achievements you didn't get the first time, which are unique and fun.
I think one of the things I liked most about Brothers is the way that the gameplay mechanic of controlling both brothers ties in with the story.  At the beginning of the game the controls are a little awkward, perhaps referencing the relationship the brothers have with each other.  As the games progresses and you become more adept at controlling the brothers, we begin to see the two siblings developing a bond with each other. Gameplay elements, such as the older brother having to often assist the younger in order to reach ledges, move heavy objects, or swim through water, might seem like trivial tropes of two-character gameplay, but they end up being crucial to the game's larger narrative.  While it's not a long game, it certainly is a well thought out game where every scene contributes to the whole.  Due to the charming and often forboding atmosphere, the excellent story, and the clever control scheme, I'm giving Brothers: A Tale of Two Sons a rating of Great.  While I wish it were longer and featured some more elements of exploration, I can't deny that it is an unparalleled experience that will leave an impact on you.

Brothers: A Tale of Two Sons was released on August 7, 2013 for X-Box Live Arcade as part of Microsoft's Summer of Arcade.  Brothers will also be available through Steam on August 28th, and the Playstation Network on September 3rd. It was developed by Starbreeze and published by 505 Games.