Action Figure Review: The Laughing Man Joker from Legends of Batman by Kenner (Good and a 1/2) 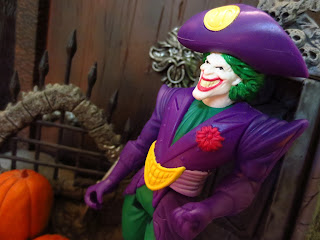 The Laughing Man Joker was the second Joker figure released in Kenner's Legends of Batman line.  Released as part of series 3 in 1996, The Laughing Man Joker tied into the pirate theme of that wave alongside First Mate Robin, Buccaneer Batman, and the Pirate Batman versus Pirate Two-Face set.  This is a pretty simple figure: it's the Joker dressed like a fancy pirate.  Do you really need to hear more? If so, join me after the break... 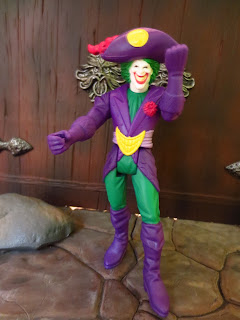 The Facts:
Scale- 5 3/8 inches tall from the bottom of his boots to the top of his hat.
Articulation- swivel hips, swivel shoulders, swivel neck (hindered by his long hair).
Accessories- Trading card, missile launcher, missile. 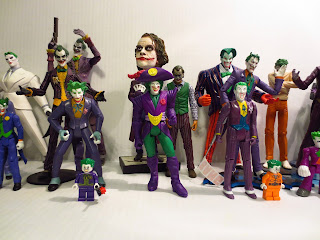 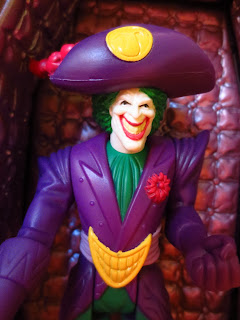 + The colors of the figure really work. They're a very vivid green and purple that exude the Joker's outlandish personality and choice in clothes.  The paint is quite neat and clean on the figure and little details like his red lips, corsage, and feather, and yellow cummerbund and hat emblem tie things together and add some depth to the ensemble.


+ The figure really has a nice sculpt.  There are lots of little details on the Joker, such as the smiling mouth with teeth on his belt buckle, the lined pattern on his glove cuffs, and the little pouch on the back of his belt.  The head sculpt is creepy--it's not my favorite interpretation of the Joker by any stretch of the imagination, but it is really creepy with a huge smile and a long chin that juts out from his face. 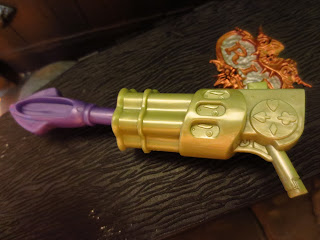 +The missile launcher is actually pretty cool as it has multiple barrels and a card suit pattern on the sides (spades, aces, hearts, and diamonds) which suits the Joker's personality.  It fits nicely in his right hand and launches the included missile pretty far. 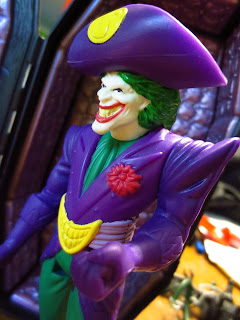 -The Joker really has a hard time standing up straight.  If he has his cannon in his hand, the only way to get him to stand is with the missile propping him up. Even without the cannon, getting the Joker to stand is difficult.  He's sculpted in a bit of a stance where he's leaning more on one hip, but he tends to topple to the right unless you get him posed just right.

-I get that it ties into the pirate theme, but gosh his hair is hideous. I must just hate the 90's long hair looks given to villains and heroes to make them more extreme, because I always seem to point out how ridiculous they look. Anyways, this is some weird looking hair. 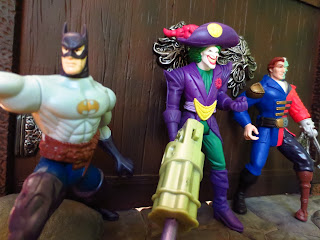 The Joker's not a bad figure, but he might be problematic when you display him. Just make sure you either prop him up with the cannon or find a suitable stand for him. The sculpt is good, definitely a highlight of this line, and his weapon is kind of fun. Simple, but fun.  I like to collect different Batman villains from different eras, and I'm sure there are lots of others who do the same, especially when it comes to the Joker. He wasn't too hard to get a hold of. I'm giving him a Good and a 1/2, as he didn't break any new ground in this line but certainly was another solid Joker variant.