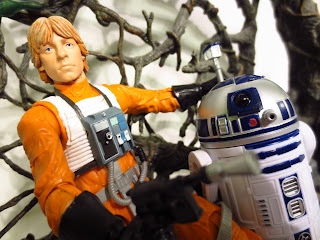 So, my relationship status with Star Wars Black has changed. Initially we were just going to get together one time for a planned event (Darth Maul). Then we had another casual meet up and enjoyed our time together (R2-D2). Now, that I have both Luke Skywalker and the Sandtrooper, I think it's fair to say that we're going steady. I really fell head over heels for Star Wars Black and am now eagerly awaiting series 2 (Seriously- Greedo? Han Solo? Slave Leia? Boba Fett? Who could resist?) with the plan of becoming a completist on this line, at least until one of Hasbro makes a major character an SDCC exclusive and makes them completely unavailable to people who don't sit on Hasbrotoyshop.com 24/7, constantly refreshing their screens. Anyways, most of that is neither here nor there so let's just stick to talking about the toy.  I'm wondering if Hasbro is intentionally releasing two figures per series that are naturally teamed together as series one has this Luke and R2-D2, series 2 has Han Solo and Greedo, and Star Wars Black series 3 looks to have Obi-Wan and Anakin, probably from Revenge of the Sith. While some fans have expressed that Luke in his X-Wing flight suit is rather limited in use for a six inch scaled line where we'll most likely never get an X-Wing that he can pilot, I disagree. My POTF2 X-wing Luke (although the original version from 95/96 was actually in his Snowspeeder outfit) served as my default Luke for quite sometime for non-canonical adventures until the yellow jacketed ceremony Luke came out.  All that's to say I like this guy, and here's why.... 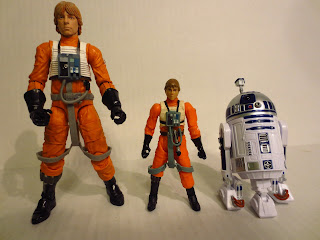 Luke's about 5 5/8 inches tall which seems to be a perfect height for him in this 6 inch scaled line. He's definitely a little shorter than the rest of the figures which makes perfect sense. I hope Hasbro manages to keep a good scale going in this line, as it could be one of the line's greatest strengths.  While the figure's aren't approaching NECA or Hot Toys levels of realism, the style chosen definitely favors realism while leaving enough wiggle room so that creatures and droids fit in just fine. Probably a good call just in case any expanded universe figures get brought into Star Wars Black in the future, as they'll fit in better with these guys than with hyper-realistic sculpts. 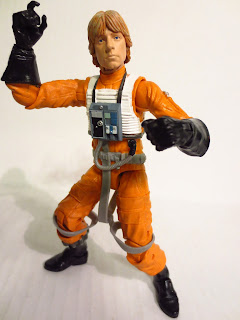 Luke's quite nicely articulated and I haven't had any problems with his joints. He features ball jointed ankles with lateral ankles, boot swivels, double hinged knees, swivel thighs, ball jointed hips, a ball jointed abdomen, ball jointed shoulders, ball jointed elbows, ball jointed wrists, a hinged neck, and a ball jointed head.  There's a really good range of motion here, especially in the head, ankles, and elbows.  I'm not really going to complain about this, as it's a necessary part of the design, but Luke's harness straps do hinder the movement of his legs. While a good deal of the articulation is well hidden, one spot that isn't is Luke's neck hinge. It's easily visible when Luke's head is in certain positions and I'm not sure like that piece of extra articulation enough to sacrifice the figure's look. 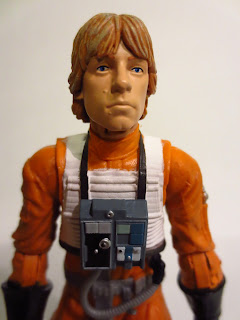 Other than the neck hinge being visible, I think the rest of the sculpt is fantastic. I'm not sure what it is, but the likenesses of both Mark Hamill and Harrison Ford are known to be notoriously difficult to accurately capture. I think it's safe to say that this is one of the best likenesses of Hamill that we've seen in toy form. It's very clearly Hamill from A New Hope (prior to his being in a car accident) and accurately captures the shape of his face and mouth as well as the mole on the right side of his face.  The uniform that Luke's wearing is excellent as well and everything seems to be in order and accurate.  Lots of folds, pockets, and little details such as the flares, and data cylinders all add to the busy and functional appearance of the outfit. The body proportions look fine (no super buff Luke here!) 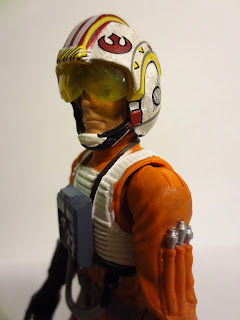 The paint is well applied, although some of the edges between the orange suit and the black boots are a bit rough.  The suit looks to have a wash over it to help bring out the detail and give it that good ol' lived-in look.  The buttons and dials on Luke's chest panel are neatly applied and the boots and gloves have a nice glossy shine to them. The hair is interesting as it has always seemed that both Kenner and Hasbro have never been able to figure out Luke's hair color. They went with a mixture of light tan and blonde streaks to give him a dirty blonde. It's not perfect, but it works. 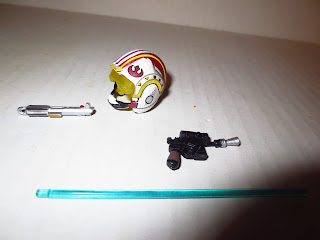 Luke comes with four accessories: a blaster, lightsaber hilt, lightsaber blade, and his helmet. The blaster is a DL-44 heavy blaster pistol which Luke carries with him on Dagobah. It's a nice sculpt (although the barrel is a little rubbery) and fits easily in Luke's right hand. 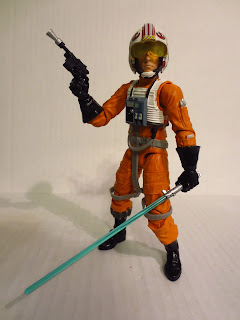 The lightsaber is the blue bladed model given to Luke by Obi-Wan Kenobi that originally belonged to Anakin.  The blade and hilt easily detach and the saber hilt itself is fantastic. Every on the 1 1/8th inch hilt corresponds with pictures of the film prop. It even has the loop to hang it on Luke's belt clip. The blade is perfectly smooth and doesn't have the "flare" seen on so many of the toy lightsabers since the Attack of the Clones figures were released in 2002. The coolest piece is definitely Luke's helmet, though. It's excellently painted with a nice weathered look and it's easy to put on and take off of the figure. This could very well be a contender for accessory of the year. 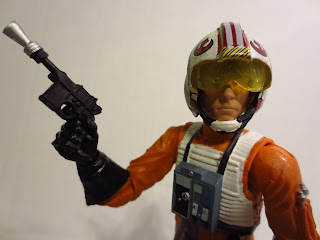 I'm surprised that Hasbro went with this variant of Luke Skywalker for the first series of Star Wars Black, but he turned out great. He's also a good mold to have around if Hasbro decided they ever want to release any other Rebel Pilots, although I'm not sure that we'll see too many ancillary characters in this line. My only complaints were some messy paint between the suit and other surfaces (such as the gloves) and the visibility of Luke's neck hinge joint during some poses. I'm going to end up going with a Great and a 1/2 here, as Star Wars Black is just impressing really impressing me with every release. The only figure I haven't reviewed yet is the Sandtrooper. Will he also be an excellent addition to the line? Time will tell, so keep reading as I'll get around to reviewing him early next week.

I've only looked at a few Star Wars toys here on ThEpic Review. I did a show and tell feature on My First Star Wars Figures based on some old Kenner figures given to me as a child and I've covered two other figures from Star Wars Black: Darth Maul and R2-D2.
Big Bad Toy Store has lots of Star Wars Black figures in stock and available for preorder. You can order Luke by himself, the entire first series, preorder all of series two, and even pick up the SDCC exclusive Boba Fett figure with Han Solo in Carbonite.