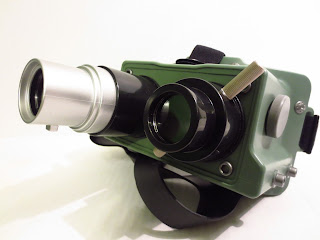 Where to even start?  Well, a few years back Mattel managed to get the Ghostbusters license and started selling Ghostbusters action figures on Mattycollector.com.  Mattel seemed to really be banking on the often-hyped-but-never-realized Ghostbusters 3 to actually materialize so that they could have the rights for merchandise when the movie got made, but that obviously never happened, so instead they just made collector figures and sold them online. That went pretty well for a while, but soon some problems began to rear their heads, such as Mattel's reluctance to release figures with unique bodies, their propensity to create multiple (and often pointless) variations of the main Ghostbusters, poor sculpting and likenesses from time to time, a Stay Puft Marshmallow Man who turned yellow, a tendency to be really stingy with accessories, and their near refusal to make ghosts for the guys to bust.  While the action line fizzled out (even after attempts to get an Ecto-1 made for the 6 inch figures), what has seemed to be a success for Mattel have been prop replicas based on the great ghost busting gadgets from the film.  Having already released the PKE Meter and the Ecto Trap, Mattel has now moved on to the Ecto Goggles.  Ready for a look at one of the Ghostbusters' signature devices used to view PKE valences and invisible ghosts? Then join me after the break... 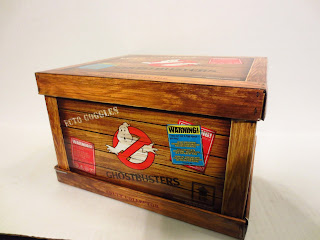 These are a prop replica of sorts, although they are more of a high end toy than a strict prop replica. While prop replicas are typically designed to be displayed, these are definitely designed for use and play by adult Ghostbuster fans.  The main body of the Ecto Goggles is made of a very solid and sturdy plastic, while the head strap is made out of rubber and elastic. 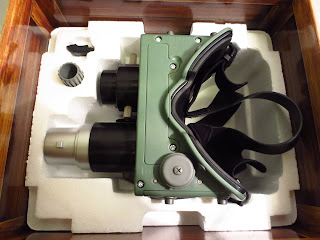 They're based off of the prop from Ghostbusters typically worn by Ray Stantz (Dan Aykroyd), and are definitely pretty accurate to the film models. I'll talk a bit more about the particulars of their accuracy in a moment, but let me mention a little bit about the box.  The Ecto Goggles arrive in a very cool heavy cardboard box designed to look like a shipping crate.  All over the "crate" are various logos and warning labels, as if you had actually purchased a piece of hi-tech equipment. It's a neat package that you'll want to hang onto and possibly even display. 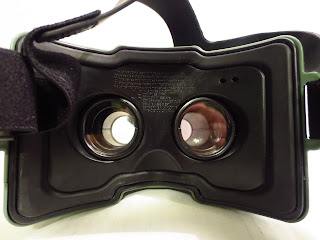 Functionally the Ecto Goggles simply go over your eyes like any other goggles, and are held in place by a series of three straps. The straps can be adjusted, but I actually found the fit to be fairly loose on my head (I must have a smaller head).  Fortunately, there is a place sculpted into the faceplate that helps to catch on the bridge of your nose and keep them in line. The goggles are also kind of heavy due to the interior electronic components, so keeping them up on your forehead can be tough if the fit isn't super tight. 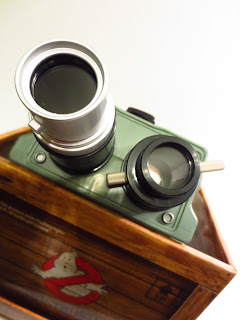 I mentioned that the Ecto Goggles are more of a high end toy than a straight up prop replica, and perhaps the most telling sign of that is the fact that they have an electronic play feature.  Once three AAA batteries are installed (they're not included), looking through the goggles and turning a knob allows the user to watch four different Slimer animations while hearing sound effects. 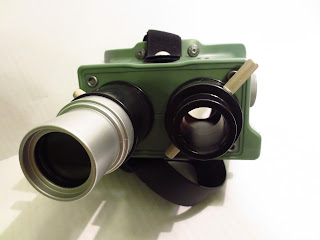 You get the first two animations by turning the dial clockwise (Slimer materializing and flying around, and Slimer floating in place waving his arms) and the second two by turning the knob counter clockwise (Slimer flying towards the wearer, and Slimer peeking down from up above) all accompanied with lots of Slimer groaning sound effects.  It's kind of a neat feature, and the Slimer that appears is actually the Mattel Slimer toy done in an enhanced stop motion style.  The images appear in the lens covering your right eye and are easier to see if you close your left eye while watching them. It's not the kind of thing I can photograph.  Like I said, it's kind of novel, but it's sole benefit is for the wearer as bystanders will only be able to faintly hear the sound effects, so I'm not really sure what led to the decision to add this feature.


I doubt many fans are actively playing with these, and are either using them for cosplay or display. I think I would have opted to pass on this feature to make them both less expensive and lighter. The PKE Meter and Ghost Trap have great electronic functions that aid cosplay and display, but this feature really does feel more suited to a children's toy. 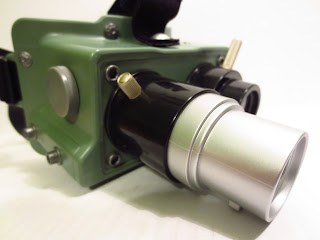 I'm not going to go over every inch of these things, but as far as capturing specific details such as screw placements, knobs, and other such things, they're very accurate as far as I can tell when comparing them with various stills of Dan Aykroyd wearing them in Ghostbusters.  What strikes me, however, is that these seem to be a bit bulkier and more rounded than the film props.  I'm sure that's because the film props didn't have to do anything, which once again brings up the question of why Mattel felt the need to add an electronic feature to them.  It's hard to talk about sculpting on something like this because it's pretty basic, just like the prop. It looks like a large pair of goggles.  Most of the "screws" from the prop are sculpted on as plastic bits with metallic paint.  There's little paint elsewhere, as most pieces seem to be molded in the appropriately colored plastic.  There won't be any doubt as to what these goggles are, but they do look a bit toyish, something that's never good for a prop replica piece like this. 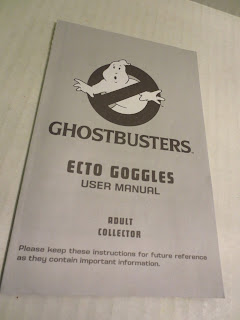 The Ecto Goggles actually do come with a few little extras.  First up is an instruction manual that explains the operation of the device. It also includes an in-universe introduction from Venkman, Inc., the company selling the goggles. 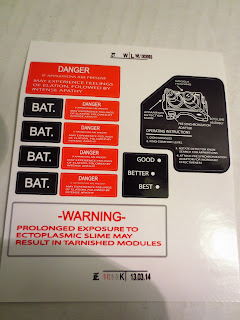 The second little extra is a sheet of stickers. These aren't film accurate but are simply a little extra for fans wanting to spice up their goggles.  There are some funny stickers that look like warnings such as "Danger- If apparitions are present- may experience feelings of elation, followed by intense apathy." 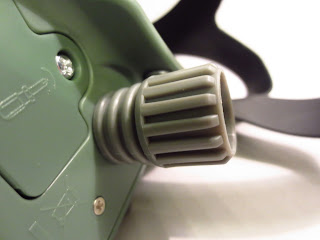 The last extras are two small plastic pieces that attach to the previously released PKE Meter and the Ecto Goggles.  They're some type of signal receiver and enhancer and apparently work to send a signal from the PKE Meter to the goggles to unlock two new goggle animations.  The signal receiver replaces a dial, screwing onto the bottom of the goggles while the enhancer plugs into a small hole on the bottom of the PKE Meter.  When you turn on the goggles and have the PKE Meter operating at a rapid beeping, you'll see animations of the librarian ghost Eleanor Twitty from Ghostbusters, and a proton stream.  It seemed to work just fine, but overall wasn't anything super impressive. 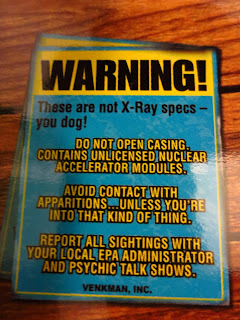 With conventions and cosplay becoming more popular than ever, it seems that Mattel really could have a decent audience for products like this (although Ghostbusters fans have been building their own props for years).  The PKE Meter and Ghost Trap they've released have both received stellar reviews, but I'm not as impressed with the goggles. I'd much rather these had been more lightweight with a focus on accuracy rather than including a needless "fun feature." Had these been released as a tie in for a Ghostbusters movie and been available on store shelves, I think I'd be ecstatic, but as a product marketed to adult collectibles, the Ecto Goggles are a bit lacking. They're not bad, don't get me wrong, but they just don't seem as well crafted and accurate as the Ghost Trap and PKE Meter.  I'm giving them a Good and a 1/2 overall--I'm glad I own them, but I have to say that I'm a bit disappointed by them. 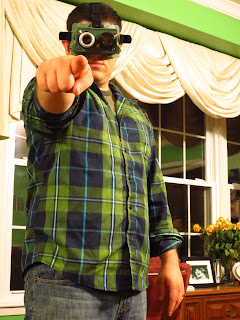 I haven't reviewed anything else Ghostbusters here on ThEpic Review yet other than the Zombie Monster from The Real Ghostbusters: Monsters line.  Unfortunately, these goggles are now sold out on both Mattycollector and Big Bad Toy Store, so if you want a pair of these you're probably going to have to track them down online at various marketplaces at an outrageous markup.