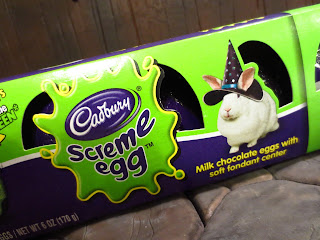 Someday I'll have that magical conversation with my daughter; we'll be sitting down and enjoying Cadbury Eggs together during October and she'll say how much she enjoys them, and I'll proceed to tell her that when I was a kid, we only got Cadbury Eggs during Easter. She'll be mortified. "What did you do, Dad?" she'll ask?  I'll tell her about how I kept a stash of Cadbury Eggs hidden away for the rest of the year, and she'll be thankful that she didn't live in the old days when fondant filled chocolate eggs were only available at Easter and not Halloween.  Yes, we now have Cadbury Screme Eggs, although the package advises us to "Fear Not!" because they taste the same as regular Cadbury Creme Eggs. Doesn't it seem counter productive to advise us to not be terrified when you're peddling something called a "Screme Egg?"  I expect this candy to terrify me to no end. I was almost disappointed that when I bit into it, there wasn't a razor blade or an eyeball inside that caused me to shriek in terror and/or pain.  Nope, just the same old delicious Cadbury Creme Egg that I've always known, only with a green creme center.  More after the break.... 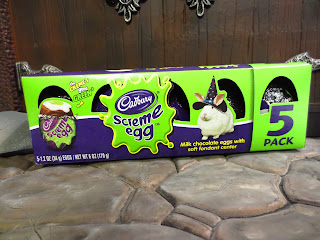 The box is green and purple! I've mentioned before that while Orange and Black are the John and Paul of Halloween colors, Purple and Green are the George and Ringo, but they're still my favorite (colors, that is, not necessarily my favorite Beatles).  The box also has a picture of the infamous Cadbury bunny in a witch's hat.  I wonder if Cadbury Photoshopped that or if there really are Halloween costumes made for rabbits?  The box comes with five Cadbury Screme Eggs, which, depending on if you like them or not, is either four too many or just enough to consume in one sitting.  I love them, but I get jumpy if I eat more than two at once. 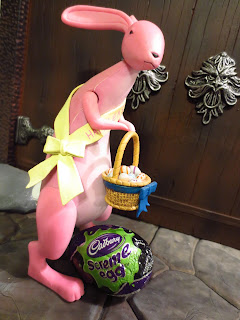 They're individually wrapped in a black, purple, and green foil wrapper.  I think you can buy these individually at candy shops and drug stores. Probably gas stations as well.  Cadbury eggs are really versatile.  While you typically just bite into them and eat them, I've made creme brulee out of them before. It was really, really good.  I wonder if you could fry a Cadbury egg?  You could also probably melt them into those plastic Wilton candy molds, but I don't know how they'd set. That sounds really fun though, and I might try that. 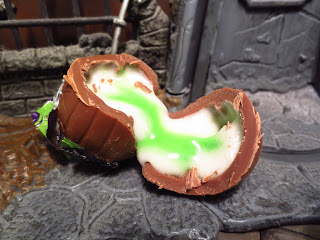 Here's one that I cut in half!  It's a very pleasant, almost pastel or slime green.  I'm glad Cadbury opted for this particular shade of green because it's fun without being a gross green color.  The chocolate and cream are the same colors as your standard Cadbury Egg and everything tastes the same. They're delicious and much fresher than the Cadbury Eggs you'd usually eat in October. I think if someone gave me one of these while I was out Trick R' Treating, I'd be thrilled. It's the equivalent of getting two fun-size candy bars or a treat bag filled with those hard candy strawberries. I choked on one as a kid, but I didn't die so I still love them. 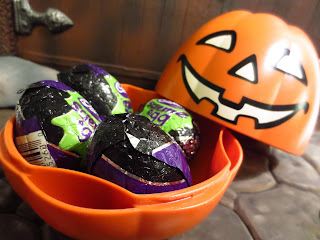 Speaking strictly as a consumer, I feel like I am the prime demographic for Cadbury Screme Eggs.  I like Cadbury Creme Eggs and I love Halloween.  I'm not sure if I want to see Cadbury produce these for every holiday. I think between Halloween and Easter, fans of Cadbury eggs can, with a little planning, ensure they have a steady supply of fresh fondant filled eggs for the entire year.