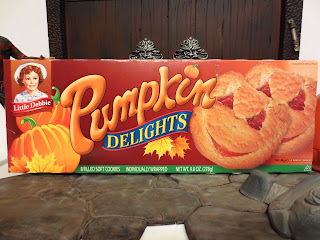 It doesn't matter when or where, but Little Debbie's Pumpkin Delights are always the first Halloween themed food I stumble across every year (typically in late August or early September it seems).  Yes, Little Debbie is the harbinger of the two months of madness and terror that is the Halloween season.  Why does she always make it to shelves first? Well, they seem innocuous enough; they're generic enough to be a general "fall" themed item rather than full blown Halloween.  Just look at the box: regular pumpkins, fall leaves, and a smiling little Debbie.  She's not decked out in a witch costume or being stalked by a serial killer or anything; she's just standing above the pleasant fall scene, peddling these pleasant ginger cookies with a pumpkin filling that I tend to by every year, even though I only ever end up eating one or two. Anyways, let's taste test them, shall we? Join me after the break... 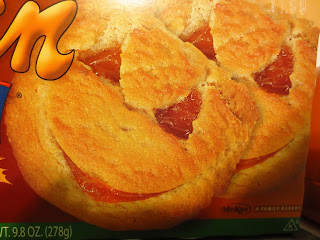 You know how I said the box was a happy fall scene? Ummm... take a closer look because I might be wrong.  Now turn off the all the lights around you, play the Halloween theme on your iTunes (or if you're like me, just leave the DVD menu running for the next two months with the sound on), and try to imagine a world where these pumpkin based novelties don't want to horrendously murder you in your sleep. Not going to happen--these things are actually really creepy.  They also have a relatively short shelf life compared to most products (I bought mine a week or so ago and they'll expire on October 7th), so I guess if you're being stalked by an evil sentient pumpkin cookie you could potentially just wait it out. 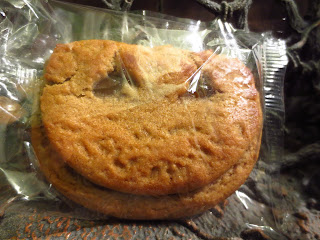 You get eight of these cookies in a box, each sealed in their own little plastic bag.  If you gave these out to trick r' treaters, you'd probably be pretty popular at first, but these things get smashed easily, so once the kids get home and find their warped treat, they'll probably come back and egg your house.  You just can't win against kids when they're dressed like ninjas and jacked up on fun size candy bars. 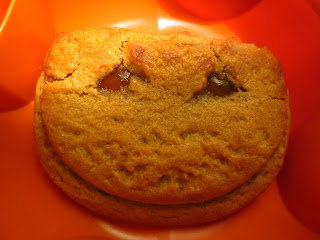 So here's what they look like out of the package.  They actually don't look like Jack O' Lanterns at all.  they look like smiley faces, but generic wide smiley faces drawn by a kid who's not too good at art and probably eats paste.  They also kind of look like anime inspired frogs.  Seriously, click here and look.  They're still pretty yummy, though.  They're kind of like a soft ginger snap (not spicy though) with a light pumpkin filling. It's a harder filling, kind of like the fruit filling in a Jammy Dodger, and not something like doughnut jelly. It really blends in with the ginger of the cookie, so it's hard to taste. 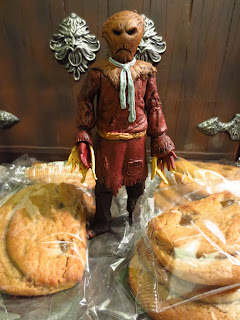 These are pretty good. I'm not a huge fan of snack cake items like Twinkies and Ho-Hos, but I do love these things.  I mean, I like the taste of them, but I love the idea of them.  Like a chill in the air or the first falling leaf, Little Debbie's Pumpkin Delights always remind me that fall is here and Halloween is right around the corner.  If you show up at my house to Trick R' Treat, I might give you one of the ones I haven't eaten yet, although this year I'm already down to only three left, so I might make it through the box before Halloween. That would truly make 2013 a Halloween to remember.