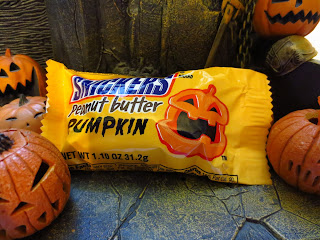 Technically, this review is out of order.  Yup, I'm not planning on reviewing the regular Snickers Pumpkin until later in the month, thus that review will be a prequel of sorts to this review. I guess you could see this review is in medias res.  Anyways, I'll catch you up on this: Snickers is a candy bar, but since it's Halloween you can buy little Snickers bars shaped like pumpkins.  You can now buy them with peanut butter in them as well.  I bought two of these (one peanut butter and regular) and got a third free at the store.  I was going to give it to my wife, but I instead ate it in the car. Oops.  (*Editor's note:  Thanks.  I was really hungry, too.*) Anyways, this product is fairly low on scares, but high on sugar and deliciousness. More treats after the break... 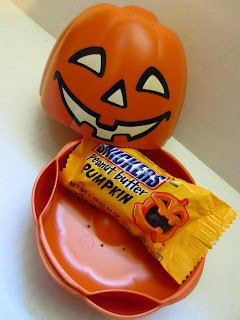 The package is pretty simple.  It's more of a yellowish orange than a bright pumpkin or Halloween orange. Perhaps this is a strategic marketing plot allowing Snickers to sell these candies until Thanksgiving?  There is a jack o' lantern on the wrapper.  He has a really big mouth and rounded features, making him look like he was carved with one of those safety pumpkin carving knifes.  Everyone knows that the bigger the knife you use, the better your jack o' lantern will be. Anyways, this is decent candy packaging if I'm already looking for the candy, but I wouldn't want to frame this and hang it on my wall. 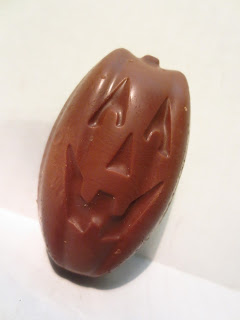 Upon opening it up, I was pleased to see that the candy isn't just shaped like a pumpkin, but it's actually molded to look like a jack o' lantern. It's got some decent molding as far as candy pumpkins go.  It even has a stem, eyes, and pumpkin indentations (whatever those lines that run down the pumpkin are called).  It's a light colored milk chocolate. If I were going to compare it to the color of another candy bar, I'd compare it to a Snickers bar since it is a Snickers bar. If I were comparing it to a non-Snickers based item, I'd say it's the same color as a Twix bar. Ready for the taste test?  It's AMAZING! I guess I was expecting something closer to a Reese's peanut butter egg, but this thing not only has peanut butter in it, but also caramel, nougat, and peanuts.  It's really, really good. 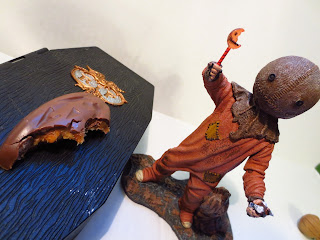 A cursory Google search showed me that Snickers has been making peanut butter variants of their standard candy bar for awhile. I did not know that. I'm not sure I'd like it as much if it didn't look like a pumpkin, which sounds dumb, but is probably the truth.  Anyways, if I had to compare this candy to one of the Nightmare on Elm Street sequels, it's definitely A Nightmare on Elm Street Part 3: The Dream Warriors.  It's a little indulgent and sometimes nutty, but overall it's fantastic and something I'd be willing to return to when I'm in the mood.