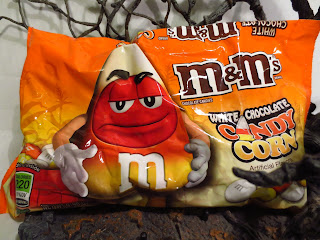 While making pumpkin flavored foods used to be all the rage during the Halloween season, now it seems that candy corn flavored foods are what's hip, cool, and funky fresh these days. Today I'm looking at one of these new kids on the block: White Chocolate Candy Corn M&M's.  Here's notable points that jump out at me from just looking at the bag:
1. The red M&M guy doesn't look too happy to be wearing that candy corn outfit. Oh! the humiliation.
2. Take note these are artificially flavored. I'm assuming this means that the candy company did not use actual candy corn to flavor these, so what exactly did they use?

Of course, that's just the colorful candy shell. If you want the rest of the article (the part that will melt in your hand) then you're going to have to read on after the break... 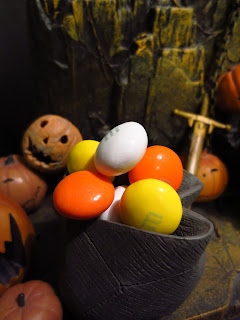 Well, these are basically orange, white, and yellow M&M's with a white chocolate center that tastes vaguely like candy corn.  I think your feelings towards white chocolate will really determine if you like these or not. They kind of remind me of the taste of white Wilton's melting wafers, the candy wafers that you melt and put in clear plastic trays to make your own seasonal candies. I loved making those as a kid, so I'm fond of these. That being said these M&M's are really rich. I can't eat more than a couple of handfuls at a time. I don't have this problem with other M&M's. 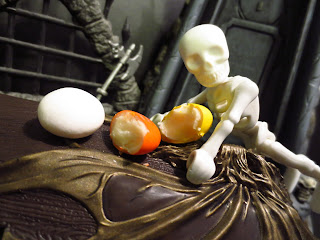 I had four special taste testers help me out with this project: Epic Review editor Arathaelia, Mom-ecue17, Dad-ecue17, and Raymond from the movie Rain Man. Each tester was asked the following two questions: "Do you like candy corn?" and "Do you like these candy corn M&M's?"
Araethaelia answered no to both questions, although she admitted she doesn't like white chocolate. She did say, however, that if she did like white chocolate she would probably enjoy these.  Take that how you will. I think it makes about as sense much as saying, "I'm not a fan of self mutilation, but if I were I'd enjoy swallowing razor blades soaked in vinegar." Take that how you will, too. 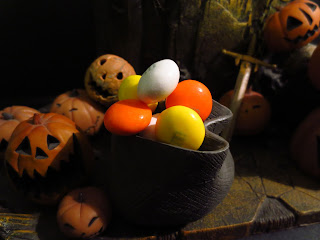 Mom-ecue said that she thinks candy corn is too sweet and also felt the same way about these. She said it was good, but too sweet for her enjoyment. Mom-ecue also drinks lots of Coca-Cola, so I don't think it's the sugar that she detests, but more the richness.  Dad-ecue stated that not only does he like candy corn, but he'd actually opened the bag of M&M's prior to my doing the review and had been eating these all weekend. I managed to hide the rip in the bag for the picture. 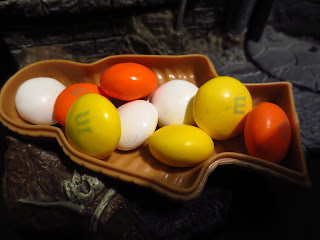 When asked, Raymond from Rain Man told me that the bag contained 47 yellow M&M's, 58 white ones, and 72 orange ones. He also told me there were 17 M&Ms with misapplied "M" logos. Thanks, Raymond!

Overall, I do like these, but they're definitely rich. Still they're quite good and would look good in a dish at a Halloween party. You could also take out just the white M&M's and show them to people, telling them that you licked all the colors off.  That's a surefire way to get the attention you so desperately crave.