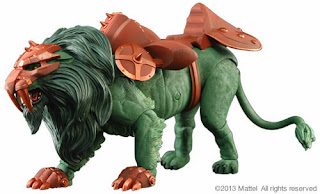 Power-Con was last weekend and while it's now over, we still have plenty of great Masters of the Universe Classics figures to look forward to for 2014. During the convention Mattel gave us a look at two monthly figures for next year, one large beast (for a quarterly slot), and a sneak peak at an accessory for an upcoming character. As usual, I'll be pointing out the figures who have been on my "Top 25" list since before Toy Fair 2012 and then moving on to the other great figures revealed. ( For a little background, check out this article where I discuss the creation of my "Top 25 Masters of the Universe Classics" list prior to New York Toy Fair in 2012.)

Lots of MOTUC goodness after the break... 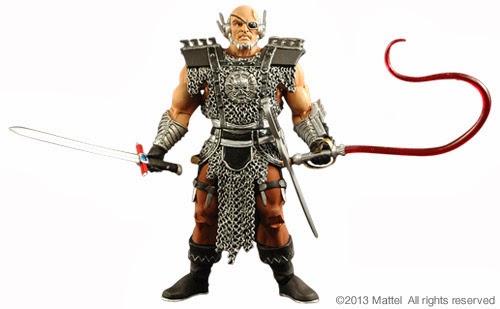 Only one figure was revealed at Power-Con from my Top 25: Blade. Portrayed by Anthony DeLongis in the criminally underrated 1987 movie, Blade has long been both one of my favorite vintage figures and my favorite villain from the film. One look at this figure just makes me cry a little inside knowing that Mattel is so limited on the characters they can produce from the film (only Blade, Saurod, and Gwildor since they had figures in the vintage Masters of the Universe line). Blade probably has one of the best head sculpts in the line (the scar and the eye-patch are perfect) and the inclusion of the laser whip just warms my heart in a special way.

Everyone else below were not on my "Top 25": 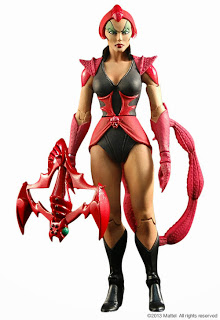 The last major member of the Horde to be released in MOTUC (Dragstor is awesome, but definitely not a major member), Scorpia looks fantastic. Her tail was teased briefly at SDCC so her appearance wasn't a surprise, but she sure does look stunning. She's Filmation enough that Princess of Power fans should be happy, but she's tough and creepy looking so fans of the vintage line only should be able to make her work. Her scorpion themed crossbow is pretty amazing! It also looks like she has a new crotch piece, so let's hope it doesn't get messed up prior to her release (like Glimmer and Octavia's). 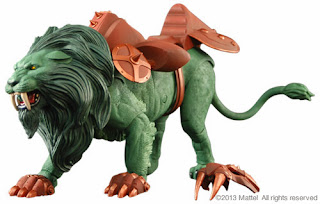 We had heard that we'd see a 200x release at Power-Con and while names like Calix, Evil Seed, King Miro, Prahvus, and Veena were all floating around, we wound up getting to see Battle Lion, King Grayskull's mighty steed. I love this guy. He looks truly epic; like the kind of figure that someone who didn't even collect the line might by just because he's so majestic and fierce looking. I love the Powers of Grayskull/ Preternia stuff and 200x, so I'm all about this guy.

Well, Mattel revealed this: it looks like Extendar's red folding shield, probably a good indication that we'll see Extendar soon (maybe at NYCC, probably at NY Toy Fair in 2014). While I like Extendar, he wasn't one of my "must haves" and his presence in next year's line seems to signify to me that we most likely won't see Rio Blast until 2015. It's getting time to riot, folks. The only vintage heroic warriors left are Extendar, Rio Blast, Rotar, and Gwildor, and I can't see Extendar and Rio Blast in the same year.

What other news did we hear?

GOOD- Scott "Toyguru" Neitlich did mention the possibility of a 200x alternate head pack for the MOTUC line. In the past he's commented that Mattel considered a head pack too gruesome as people would not necessarily get the context of the product, but since Monster High not only has similar packs but a headless action figure (being marketed to young girls) Mattel must have relented. Fans on He-Man.org are creating lists of what heads they want to see (personally, I'd want a non helmet wearing Man-at-Arms with top knot, Snout Spout, Buzz-Off, Teela, Clawful, and Acid Burned Keldor).

GOOD- We've seen some minor updates to Castle Grayskull including real metal chains and an improved elevator as well as the box. It's massive! 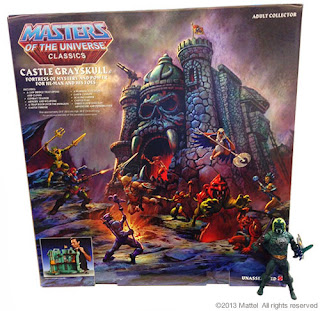 GOOD- So, didn't sub next year because you wanted to be cool and make a point? That's OK. The sub still made it and you stuck by your principles. Good for you. Ghandi would be proud. Now you can still get it on the sub since it's going through anyways as Mattel is reopening the Club Eternia 2014 subscription from Friday 9/20 9am PST through Tuesday 9/24 11:59pm PST.

BAD- Still no word on an Imp figure yet. Now I'm starting to get pretty angry.....

You can find more info at Mattycollector.com or onMattel's blog here.