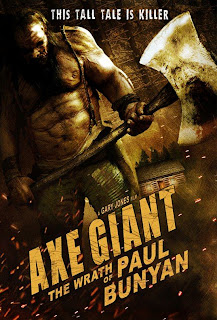 This is the greatest Paul Bunyan film I have ever seen.  It's also the worst Paul Bunyan film I've ever seen.  Actually, it's the only Paul Bunyan film I've ever seen, probably because Paul Bunyan is not a real popular character to make movies about.  Axe Giant: The Wrath of Paul Bunyan is a 2013 horror film directed by Gary Jones that presents itself as a dark and gritty retelling of the Paul Bunyan legend.  It's about a group of young first-time offenders who get sent to a boot camp in the woods in order to have their sentences reduced.  Of course, if you've ever seen any horror movie in your life, you know weird stuff is going to happen and people are going to get killed.  I guess at it's core, Axe Giant has a fairly unique premise; it's just so unfortunate that it's executed so poorly. Listen, I'm a guy that likes bad movies. I love them. They don't find me, I find them. I really wanted to enjoy this movie. I did enjoy it at times, but this movie just has too many problems, which I'll get to after the break.

After a brief scene showing the slaughter of a group of lumberjacks in the 1800s, the film introduces a group of first time offenders who are heading out into the woods for a boot camp with the intention of deterring them from a life of crime.  Led by the insane Sgt. Hoke (Tom Downey) and the perky, caring social worker Ms. K (Kristina Kopf), the kids set out for a week in the woods to learn more about themselves.  While the fitness regiment that Sgt. Hoke has in store is tough, things go from bad to worse when one of the campers picks up an ox horn in the woods, inadvertently desecrating the grave of Babe, the great blue ox .  The giant mutant Paul Bunyan who lives in the woods goes absolutely berserk over this and sets out on a killing spree of... mythical proportions.  Lots of people get cleaved with a giant axe, in case you're wondering.
Making a B-movie is harder than it looks.  While fans love to watch campy films from the past that are inadvertently hilarious, these days studios crank out B-movies.  Sometimes this works just fine, but other times we get movies that try to capture the magic of our favorite old cinematic treasures but fail miserably.  I think the makers of Axe Giant: The Wrath of Paul Bunyan were really trying to make a B-movie, but things just didn't pan out.  In some sense, trying to manufacture a good B-movie is like trying to retell a hilarious event--you just can't intentionally capture some things.  A lot of acting in the movie goes past the level of "bad" and into the category of "grating on my nerves."  I'm not typically bothered by poor acting, as sometimes it's more entertaining than competent acting, but when someone tries to act poorly and fails?  That's some rough stuff to sit through right there.  Downey's Sgt. Hoke is definitely guilty of this, as well as a few of the kids who get hacked up (particularly Jessie Kove's Zack and Clifton Williams' Marty).  I want to laugh at the acting, not cringe at it. Jill Evyn's Trish, another of the campers, seems to actually hit the sweet spot of bad acting but not truly cringe worthy acting. A few of the cast members were actually decent, though, which is about the best I can say. Joe Estevez plays a crazy hermit living in the woods who is exactly the kind of bizarre and irritating character you'd expect to find in a movie like this.  Amber Connor as CB, one of the campers, and Kopf's Ms. K aren't bad, either, and really carry the last third of the film.
Secondly, the special effects in this movie, for the most part, just aren't very good.  Once again, I love cheesy.  Cheesy effects are great.  These effects are just atrocious.  So much of the film seems to be filmed on a green screen that I constantly felt like I was being pulled out of the movie. Even on a low budget film, that's never a good thing.  Here's my opinion of using CG--if you can't use it well, just don't use it.  Maybe it's just me, but I'd much rather watch poorly executed traditional effects than below average CG any day of the week.  Paul Bunyan himself looks good (and is played well in costume by Chris Hahn), but since he's a giant there's lots of green screening going on to make him look larger than life.  Perhaps the worst offense in this movie, however, is the fact that all of the blood and hacking are done with CG. I hate CG blood. Hate it, hate it, hate it. I don't care what movie it's done in; it looks like rubbish. Fake blood is pretty much one of the easiest and cheapest things in the world. I saw aerosol cans of the crap at Wal-Mart last night that you can spray on. I don't know how well it works, but I would almost guarantee I would enjoy it more than the CG deaths in this film. Had there been less CG and more traditional effects, I think this would have been a far better movie. Horror movies, especially low budget horror movies, are one of the last bastions of traditional special effects. Makeup artists hone their craft and spend years becoming experts to achieve great looking effects.  CG needs to be a last resort for any filmmaker.
There really is a decent B-movie contained within the crazy concept of Axe Giant, but some poor decisions have certainly hindered it from being anything that I would call watchable.  Maybe if you have a group of friends who are willing to riff on this thing the whole way through, it might be worth a watch. I will say that there is a great song at the end, however, about Paul Bunyan. It's a folk song and reminded me of the songs from The Legend of Boggy Creek and My Name is Bruce.  There's also a fairly decent chase scene that's extremely reminiscent of Jurassic Park, and as mentioned above, the costume for Bunyan himself is really well done.  I'll give the movie some points for those factors, but otherwise there are far too many good low budget and independent horror movies out there that are more worthy of your time.  I'm giving this movie an Eh.  You'll laugh, you'll cry, and you'll hate yourself for wasting your time, even if you do enjoy the movie a little.