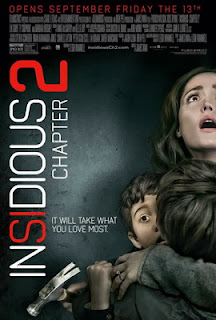 While I really wanted to see Insidious: Chapter 2 on it's release date of Friday the 13th of September, I ended up waiting until this weekend. I did, however, get a chance to re-watch the first Insidious last week, something which I think really adds to the experience, because Insidious doesn't feel like a tacked on horror sequel; it really and truly feels like the second half of a complete film. I'm trying to keep this review as spoiler free as possible, so I'm going to be a bit vague at times while assuming that you've seen the first film, because you really need to in order to make sense of Chapter 2. The movie relies heavily on the original film and takes place before, after, and sometimes even during the original film's timeline. It's certainly not the scariest film of the year (thus far I believe that would be another film by director James Wan and starring Patrick Wilson: The Conjuring), but it is clever, inventive, and fun. Insidious definitely felt as much like a dark fantasy film as a horror film, as the movie has it's own rules, alternate worlds, and mythology. Chapter 2 continues that trend while not feeling like it's retreading the same ground.

Remember the Lamberts? Josh and Renai (Patrick Wilson and Rose Byrne)? That nice family who went through a nasty spell where their oldest son went into an unexplainable medical coma right around the time that weird stuff started happening?  Creepy voices coming from baby monitors, doors mysteriously opening, weird little kids dancing to Tiny Tim, you know the stuff. They tried to move, but it turned out that it wasn't their house that was haunted, but their son Dalton (Ty Simpkins). While Dalton's awakening from his coma seems to point towards things getting back to normal, the worst is only just beginning.
Horror truly is a diverse genre, and one of the problems I often notice is that some viewers expect the same things out of every horror film. Walking out of the movie, two girls walked up to me and the Reel Brad Bell saying, "That movie was awful--it wasn't scary." While I thought it was certainly creepy at times (it certainly builds a dark, oppressive atmosphere and features plenty of jump scares and tense moments), the horror didn't stick with me after I left the theater. That's not a knock on the film, however, just an assessment that a horror film can simply offer a cast of fairly likable characters, a solid story, and a few shock moments without having to be La Fin Absolue du Monde from John Carpenter's Cigarette Burns. All of that is to say that I feel like Insidious has done a tremendous job of carving out it's own niche. While it borrows liberally from plenty of other horror films, it manages to make something that's fairly unique in a very crowded genre. The way this film utilizes the spirit world of the further and explores the plight of the entities who dwell there is engrossing, and certainly captivates the imagination in a way that many other horror movies don't.
I mentioned the cast above, and I'll mention them again here, as director James Wan has put together a very strong cast. All of the cast members from the original are back, and leads Patrick Wilson and Rose Byrne both do an excellent job of portraying a couple whose marriage and family are put through the ringer. Patrick Wilson gets the chance to explore multiple facets of Josh Lambert, and he does a fantastic job with the role. They don't get huge roles, but since the movie does feature scenes taking place in the past, we have actresses playing younger versions of Elise Ranier (Lin Shaye) and Josh's mother Lorraine (Barbara Hershey). Jocelin Donahue plays a strong young Lorraine/Hershey, but Lindsay Seim is absolutely amazing as the young Elise/Shaye. I was floored. Lin Shaye is a beautiful actress who certainly has a very unique look and presence, and Lindsay Seim manages to capture that. Her screen time is far too brief. While some viewers might be dismayed, Specs and Tucker (Leigh Whannel and Angus Sampson) are back as well, providing some needed comic relief to help make the film more fun and enjoyable. I personally love these guys, as their personalities and bickering truly remind me of the Ghostbusters.
I'm going to give Insidious: Chapter 2 a Great, particularly due to the way it intertwines with the original film. If you saw the first film and enjoyed it, this should feel like a natural extension of that movie, and a conclusion to the narrative it began. It's a fun, fairly thoughtful horror movie that does not fail to entertain, quickly whisking you away from one frightening scene to the next.