Tombstones of Halloweens Past 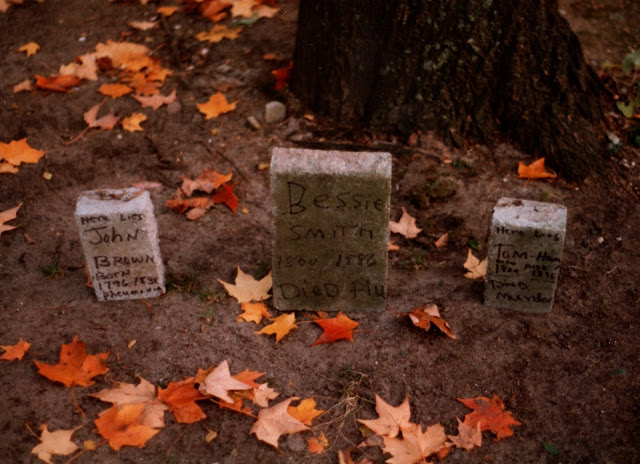 Tombstones are always super fun to put in your yard, unless they're really marking the graves of beloved pets or freeloading relatives who didn't plan ahead.  Anyways, here are some fun gravestones that I made as a kid with help from various relatives.  In the picture above are some tombstones that date back to 1987 (although the dates fool you into thinking they're older) and were made with the help of my Grandma (the same Grandma who dressed up like Skeletor to play He-Man with me).  Looking at these, they're pretty honest and regular.  Usually gravestones used for decoration have silly little sayings on them or the names of movie monsters; these ones apparently served to educate kids about the harsh realities of life before the discovery of penicillin.  They also helped me to become an expert at the Oregon Trail in computer class.  More Hokey Halloween Horror after the break....

On the far left, notice John Brown who died around the age of 42 from pneumonia. Then in the middle we have Bessie Smith who died at the age of 86 from the flu.  That's not really a bad run, if you think about it, especially considering they didn't have seat belts or gluten free bottled water back then.  On the right is the conundrum: poor Tom Ham, who died from murder.  While you're probably thinking: "Finally! Something awesome and spooky," you might want to stop and notice that Tom Ham was killed at the age of 96.  Who kills a 96 year old?  Was Grandma trying to teach me about mercy killings at a young age?  Someday in the future, I imagine historical revisionists will probably look back at this picture and anachronistically claim that Tom Ham was the victim of a Soylent Green styled government death panel. 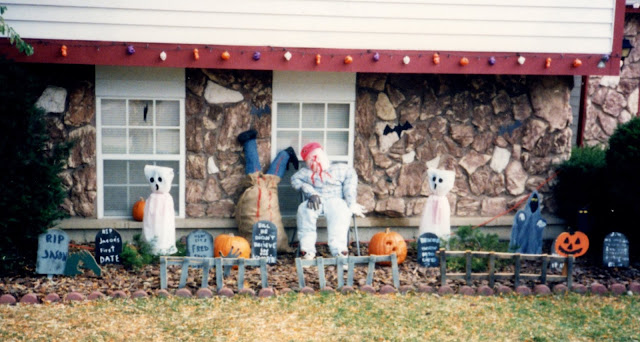 Here's another Halloween bonanza from a house I lived in outside of Chicago when I was young.  It's hard to read the tombstones here, but as you can see the house made a statement.  The statement was loud and clear: "Children under 5 and wusselberries need not Trick or Treat here!"  Anyways, here's an example of some of your classic Halloween tombstones. From Left to Right:

"RIP Jason"- He was the preeminent Halloween serial killer around my neighborhood. Anyone who was cool owned a hockey mask, just because.

"RIP Jason's First Date"-Does this gravestone fit at all into the established Friday the 13th canon, or do we need some major retconning to make it work? I'm not really a Friday the 13th fan (I've seen the first one) so I'll need some help here.

"Dracula; Born 1430, Died ?" Pretty impressive accuracy, since a cursory search of Wikipedia reveals that the real Dracula (Vlad) was born in 1431, and this gravestone was made years before Wikipedia existed to check that fact.  Maybe my dad and I actually did some real research when making these?

Anyways, better get working on your fake gravestones!! Send in pictures of your favorites to thepicreview@gmail.com and I'll post my favorites sometime before Halloween!

Barbecue17's gravestone will say: Here lies Barbecue17, and why not?