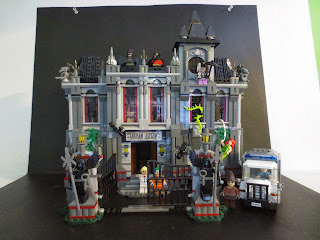 Lego released an Arkham Asylum set a few years back. Good luck picking one up at a reasonable price, however, as the price has skyrocketed on the secondary market. Fortunately Lego decided to release a second set representing Arkham Asylum late last year that is even larger than the previous set. This Arkham Asylum consists of three seperate modules that attach together in a couple of different ways to form one larger structure. There is also a prisoner transport van and the asylum gates. Featuring 8 excellent minifigures, beautiful, intricate gothic designs, and some really fun play/display features, Arkham Asylum Breakout is an excellent set that kids, collectors, and Batman fans of all ages will enjoy. It's also a freaking creepy asylum for the criminally insane named in honor of the works of H.P. Lovecraft. Does it belong on 31 Days of Toy Terror? You better believe it! 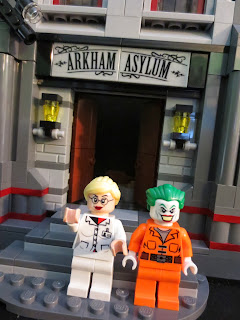 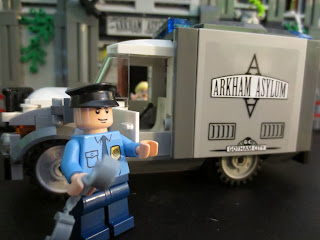 *The minifigures are all stellar. Robin, Dr. Quinzel, Batman, Joker, and Poison Ivy all feature secondary expressions on the back of their heads. Dr. Quinzel might be my favorite but the prison suit Joker and Scarecrow are all fantastic as well. Lots of neat little accessories, too. Handcuffs, batarangs, a staff for Robin, a fish and umbrella for Penguin, and a jester's cap for Dr. Quinzel round out a nice assortment of accessories. 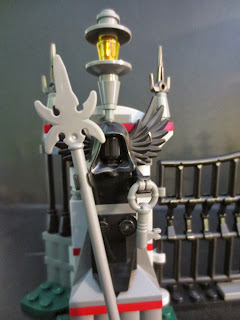 *I couldn't even begin to describe the beautiful details in this set, but I'll try. The gates feature grim reaper statues with wings and hoods wielding halberds and keys. The main tower features a very cool red stained glass windows. The roof of the asylum features some cleverly constructed gargoyles and various spires. The windows are nicely done; one of them is even "broken" and features a jagged glass effect. Mr. Freeze's cell is lined with shards of "ice". Little security cameras are featured in a few places. While this set is designed with playability in mind, Lego made sure that it featured design on par with any of the other designer sets. 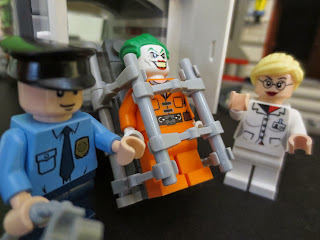 *The prisoner transport truck is a fantastic little vehicle. It is well designed and includes a transport cage for the Joker (think the beginning of the Arkham Asylum video game or the Silence of the Lambs). 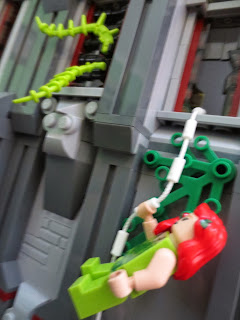 *The play features are well designed and not at all intrusive. A row of computer monitors spins around to reveal Dr. Harleen Quinzel's shrine to the Joker, featuring little cans of makeup and her Harley Quinn hat. Prison cell doors all open and close to lock up Batman's deadliest foes. A rope (looks like it was made out of bed sheets) can be attached to the floor so villains can escape through the broken window. 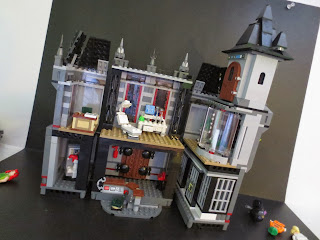 *The set can be assembled in a couple of different ways. One way makes the set look longer but leaves all of the interior areas visible from the back, better for play. The second configuration makes the Asylum look "fuller" (the walls wrap around the set more) but not all of the interior is accessible. 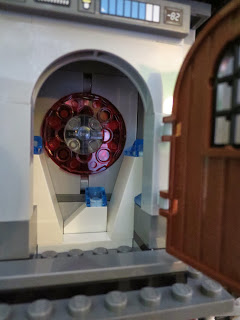 *Ummm... I wish it came with more villains, especially since there are monitors showing Two-Face and a special cell for Mr. Freeze. Other than that, no complaints! Of course, those two guys come with other sets, so I've now purchased them and added to my collection. 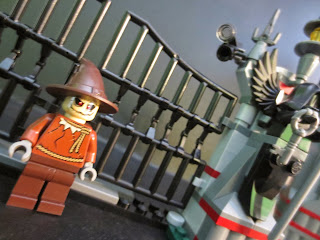 Overall: Not only is this my favorite Batman Lego set, but it certainly might be my favorite Lego set from last year, a year that featured a few nice LOTR sets, the modular Town Hall, Monster Fighters, and the excellent Haunted House. Lego went all out and this set makes me that much more excited about future updates into the Lego DC Superheroes line. Grab this set soon as it's sure to be a tough one to come by in a few years. 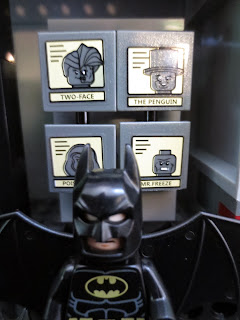