31 Days of Toy Terror: "Attack in the Box" The Joker from Batman by Mattel 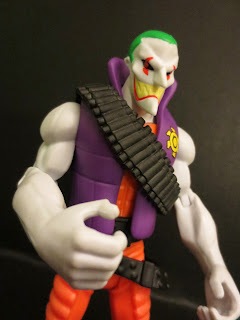 While I love to pick up multiple versions of various Batman villains, the main reason I snagged this guy was because he was $5. "Attack in the Box" The Joker is part of Mattel's basic Batman line (which seems to possibly be on the way out) and presents the Clown Prince of Crime in a very unique outfit that looks equal parts escaped convict/ urban gang member/ hipster clown. Sometimes it's fun to pick up a toy that's clearly intended for kids and not collectors, as seems to be the case here as the figure is covered in neon colors and features a giant accessory. Want to take a closer look at The Joker? Well come on in! Since so many people are terrified of clowns, I thought the Joker might make an excellent addition to our 31 Days of Toy Terror. Enjoy! 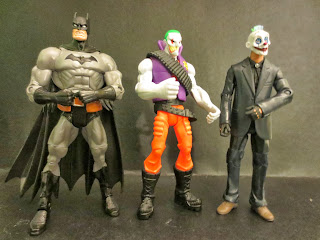 The Joker is almost 6 1/4 inches tall.  Depending on how big of a stickler for scale and style you are, it's possible that you might want to display him with DC figures from Mattel's DC Universe Classics and Movie Masters or DC Direct/ DC Collectibles, but I imagine that most fans will be unsure as to where to display this guy as the style is very jagged and slightly exaggerated with lots of bright, solid colors. I like the look of this line, but I can't think of many other lines he's going to fit in with. 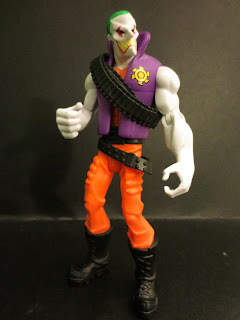 The articulation is definitely very kid friendly: swivel hips, a swivel waist, swivel shoulders, hinged elbows, and a swivel neck. It's not bad articulation for taking neutral poses or for play, but the absence of ball joints anywhere definitely will feel limiting to collectors accustomed to DC Universe Classics and Marvel Legends. Everything feels solid and sturdy, though, so I can't see breakage being a problem unless you're really rough with this guy. 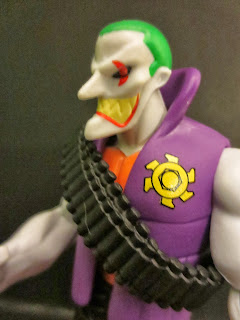 I do enjoy toys with simple, stylized sculpts (one of the things I loved about G.I. Joe: Sigma 6) and The Joker definitely delivers in that respect. The proportions of the arms and feet are just a bit larger than normal while the hips are quite thin and the head is a bit small. It looks good, though, and adds a certain flair to the figure.While it looks like the Joker's wearing a sleeveless prison jumpsuit under his vest, the presence of some very cool tactical boots (check out the smiles on the toes) and his belt and bandolier give the impression this guy has escaped and is now making war on Gotham. It's a different look for The Joker, for sure, but it works. The head sculpt is kind of creepy. Interestingly, the Joker has what looks like a buzz cut rather than his typical messy green locks, but that angular chin and nose and mile wide grin let you know that this is indeed The Joker. Look close enough and you can see the individual pointy, shark like teeth. 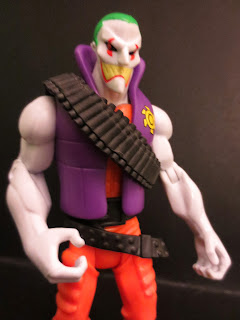 The paint work is pretty nice, as well. It's very clean and bright with bold, solid colors. The purple and orange are definitely Jokeresque colors. The orange is neon and definitely helps to make this guy visible no matter where he's hiding. The purple vest is a bit more muted and features an emblem of some kind on the left breast. The paint on the face is excellent with a menacing red paint decoration on the eyes and yellowed teeth. 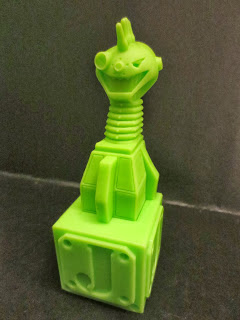 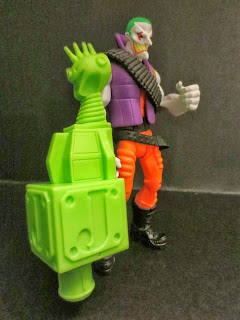 The device can stand up on it's own (though a tab on the bottom causes it to lean forward) but when you lift it up you can spin out a hinged gun barrel from the bottom. The device is soft and somewhat flexible so it can fit over The Joker's right arm and serve as a giant cannon. It looks odd and has a difficult time staying on. Interesting idea, poor execution. The black bandolier on Joker's chest is removable, so that's another nice little extra.

I'm not overly excited by this figure, but I can see it's well done for the most part (except for the bizarrely nonfunctional accessory). I'm ultimately giving the figure a Good. While I know there are a handful of collectors out there that love this line (Philip Reed of Battlegrip.com seems to be a fan with plenty of reviews of them) other than having them as alternate versions of Batman characters for my various "multiple versions of one villain" shelves, I'm having a hard time getting jazzed about owning it. Good sculpt and paint, though. I love the head and would find it impressive at any scale.

Big Bad Toy Store has quite a few of these Batman figures in, but I didn't see the Joker. To see (and buy) others, head on over here. Also, check out our review index to find reviews of plenty of other Batman (and Joker) action figures!