31 Days of Toy Terror: Bloody Carrie from Carrie by NECA 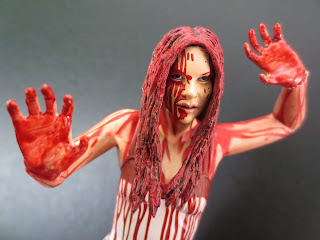 For years I have wanted action figures based off of the works of Stephen King. When I was in 8th grade and just starting to avidly read King's work I distinctly remember typing up a list (on my typewriter no less) of the figures I wanted to see in the first series of my imaginary Stephen King action figure line. The first series consisted of Roland Deschain with his revolvers from The Gunslinger, Gage Creed with a scalpel and Church the cat from Pet Sematary, Jack Torrance with typewriter and croquet mallet from The Shining, and Carrie White with a bucket of blood and "snap on flames" from Carrie. I wrote that list back in 1997 or 1998 so it's been quite a long time but I finally got one of my dream figures: Carrie White! She's based on Chloe Grace Moretz's version of the character from the upcoming film Carrie which is supposed to be a new adaptation of King's original novel versus a remake of Brian De Palma's 1976 film, but we'll have to see how that plays out as there is some specific imagery from the trailer that looks to be heavily inspired from De Palma's version. I was really excited to see NECA jump in and release some figures for Carrie as they don't seem to do as much pure horror work as they have in the past. Let's get the review started, if you dare... 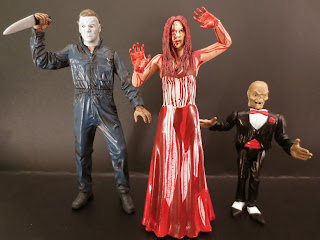 Carrie stands right around 6 1/2 inches tall and is sculpted in a very realistic style, similar to most of NECA's other movie based toyline. There are only two figures in the line, both variations of Carrie. Besides the bloody version I'm looking at today, there's also a non-bloody version of Carrie in her prom finest complete with a bouquet of flowers. 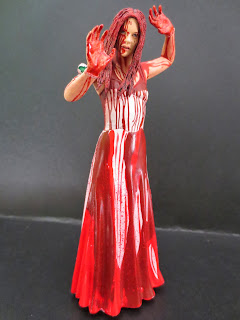 Before my Carrie figures arrived in the mail I had the chance to examine Brad's and I was quite surprised to find that Carrie only has one point of articulation: a ball jointed head. It's a fantastic ball joint that has a good range of movement and allows you to add some character to the sculpt. Still, it seems quite unusual that this is all the artiuclation NECA chose to include, especially as over the past couple of years they have steadily increased the amount and quality of articulation on their figures as seen in their Rambo, Aliens, Rocky, and Predators lines. Maybe NECA figured that the presence of articulation would hinder the aesthetics of the sculpt? Carrie is very much a mini-statue, so while you're not going to be able to craft your own adventures with Carrie in multiple poses, she'll always look great on a desk, book shelf, or display case. Unlike with a TMNT or Masters of the Universe figure, I don't imagine that I'd be spending much time playing with the figure anyways; mostly just photographing her and standing her amongst the other denizens of my horror shelf. 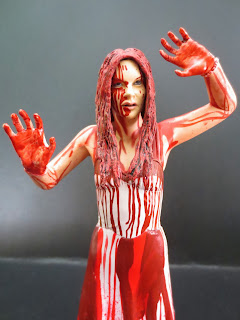 Due to the abundance of blood, this is a really tough sculpt to judge without looking closely. From what I can tell, though, most of the sculpt is fantastic and dead on to films stills I could find of Chloe Grace Moretz's portrayal of Carrie (the film isn't out yet, but I'm anxiously anticipating it).Let's start with the overall pose: Carrie is standing up mostly straight, but there's a bit of a forward lean to her head that, when combined with her waving arms and spread out fingers, really gives the impression of movement. It seems that we're witnessing Carrie using her telekinetic powers to take revenge on her classmates, especially because of the very vengeful look on her face. With an intent gaze and an expression that's almost a snarl, Carrie really, really doesn't look like the kind of girl you'd want to anger any further.The hair looks fantastic. There's lots of detail to highlight individual strands but it's clumpy enough to emphasize the fact that it's caked in pig blood. The body works although the heavy blood details make it difficult to see the details on the rather plain dress. Carrie has a bracelet on her left wrist,  corsage on her right, and a ribbon tied on the back of the dress. NECA credits Adrienne Smith with the sculpt. 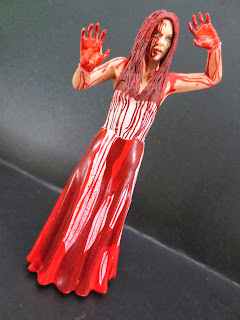 From the waist up the paint is fabulous. The skin tone is perfect and the application of the blood on Carrie's arms back, and chest are really well done. There is a mixture of splatters, drips, and smears which really add up to a very effective look. The palms of her hands definitely get your attention and are probably one of the most effective "blood" effects I've ever seen on an action figure. Her face is amazing too- the eyes, lips, and blood splatter on her face are perfect and quite chilling.  It's below her waist that things get a little weak. The blood is really thick, and while it makes sense that it would cling to and stain the white skirt of her prom dress, I'm not sure I like the effect of the painted blood used. NECA used two shades of red to help give some depth and it looks good at a glance or from further away, but a closer inspection doesn't help the paint to hold up as well. Perhaps it's because the lower part of Carrie's dress is a softer rubbery material (she has actual legs and feet under it) and the paint doesn't adhere as well. Here shoes are painted underneath, although the edges are a bit messy. I think I'd give the paint job of her upper body the highest possible marks while I'd dock the lower body a bit for being too thick. NECA credits Jon Wardell and Geoffrey Trapp with the paint work. 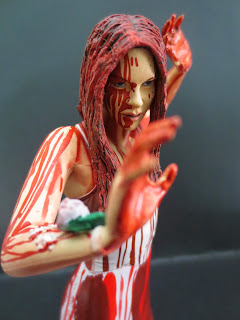 Carrie doesn't come with any accessories. Since there's so little articulation on the figure, I really think NECA should have tried to include something to make the display even more dynamic. A base with flames would have been ideal, but even one of the buckets of pig blood would have been a welcome addition. 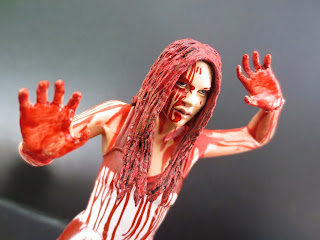 I try to judge figures based on what they are, so I'm not comparing Carrie to other recent super articulated lines that NECA has released and am instead comparing her more to something like NECA's earlier Cult Classics line and some of the more statuesque McFarlane figures as well as NECA's work on teen properties like The Hunger Games and Twilight. The sculpt is excellent as is most of the paint and I absolutely love the look of the figure. I've waited years for an action figure based on a Stephen King character and I'm thrilled to finally have one! That being said, I can't help but feel that NECA really skimped by not including a display base or any accessories. I can understand their concern that articulation may have marred the sculpt, but surely something could have been done to add a bit more value to the sculpt. I'm giving the statue/ figure a Great, but realizing I'm probably being more generous than collectors who haven't waited years for an action figure of the greatest prom queen of all time. You go, girl!