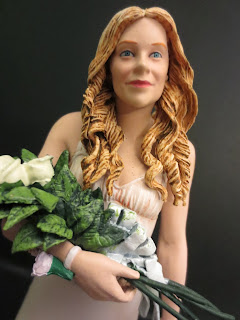 A little over a week ago I reviewed the blood soaked Carrie figure from NECA the new adaptation of Stephen King's Carrie by director Kimberly Peirce and starring Chloe Grace Moretz and Julianne Moore. Today I'm looking at the pre-blood drenched version that simply represents Carrie in her prom dress while her and Tommy Ross are being crowned king and queen of the prom. It's a very interesting choice for a figure since taken at face value, this is just a girl in a prom dress. Stand the blood drenched version next to, however, and you've got a pretty neat display that should be easily recognizable to most people. Ready for a look at Carrie as part of our 31 Days of Toy Terror? Then join me after the break.... 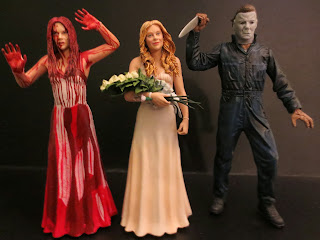 Carrie stands right around 6 1/2 inches tall and is sculpted in a very realistic style, similar to most of NECA's other movie based toylines. There are only two figures in the line, both variations of Carrie, and I believe that this figure is the lesser produced of the two; Big Bad Toy Store lists a case of these as consisting of 6 bloody Carries and 2 non-bloody Carries. 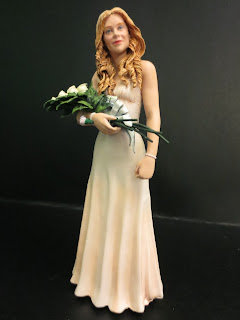 Since both versions of Carrie share the exact same legs, dress, and torso, it only makes sense that the articulation is the same. I was surprised initially to find that Carrie only has one point of articulation: a ball jointed neck. It's a decent ball joint, for sure, and while it doesn't give her as much expressive movement as the bloody version of the figure (due to the thicker hair) it does allow you to add some life to her on your shelf.  She'll stand perfectly fine on her own, however, which is a significant feature for a figure that's more of a statue than an action figure. 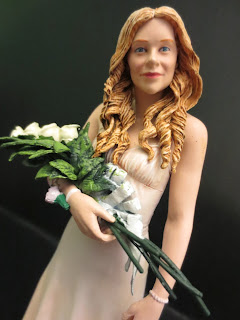 The legs, dress, chest, and neck are all one piece that's shared with the bloody version of Carrie. It's certainly a well sculpted piece that looks like a somewhat plain but still quite nice prom dress and the body sculpt implied by it looks like that of a rather average girl. Since this figure isn't drenched in blood like the other figure, it's easier to see both details of the dress and the mold lines of the rubbery material. The arms are separate pieces attached to the main body and are in a much different pose than the bloody version: the left arm is hanging at Carrie's side while the right arm is clutching the bouquet of flowers that Carrie receives. Let's talk about the face; while the bloody Carrie is unmistakably Chloe Grace Moretz, I'm not sure about this figure. Honestly, the facial structure looks different between the two figures and I feel like I'm honestly seeing more Sissy Spacek than Chloe Grace Moretz. What do you think? Am I seeing things? 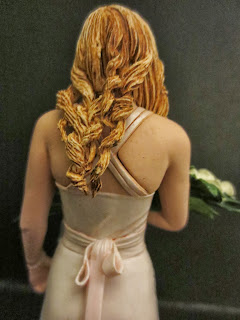 The paint work is quite good, although I think the pink dress could be a bit brighter as until I looked at it closely, I thought it was white. The dress in the film is clearly pink, a point that Carrie herself brings up when her mother accusingly remarks that Carrie is wearing a red dress. The hair and bouquet are neatly painted and the face doesn't look bad at all, but once again the makeup doesn't look like the portrayal of the character from the 2013 film.  There is some weird over sprayed paint on my figure's left shoulder. maybe this is a bit of over spray from darker paint on the hair? 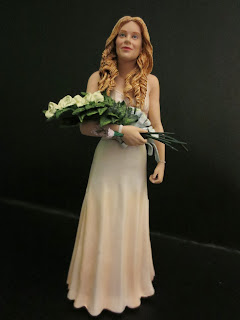 While Carrie is holding her prom queen bouquet, it's not removable. It's a solid piece that is attached to her right arm. It definitely makes the figure look more complete, but it's not an accessory since it's a permanent part of the sculpt. 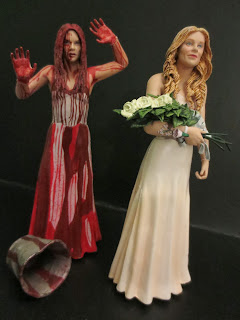 In my review of the blood soaked Carrie figure, I discussed how long I have waited for an action figure based off of a Stephen King story. I'm thrilled to have Carrie, but I definitely prefer the blood drenched version. It's just a more exciting and more dynamic figure. Still, I'm glad NECA decided to create this version of the character as it makes for a nice display of showing Carrie before and after the cruel prom prank that inevitably leads to destruction. I'm giving this figure a Good. It's certainly not a figure everyone will be interested in, as it isn't terribly exciting on it's own. The sculpt is quite good but I'm still not sold on the likeness. The dress also could stand to be a bit more vibrant. Still, this is probably the only chance we'll ever have to get Carrie action figures, so fans will want to jump on these. Most fans will probably be more interested in the bloody version, however, as it's just more fun.