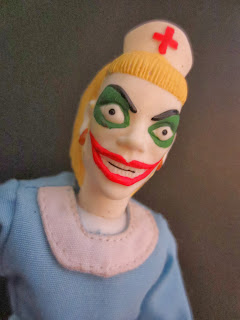 So, ready for something creepy and a bit off the beaten path? How about a look at Dementia from Mad Clowns by the Figures Toy Co. Figures Toy Co. was formed in 1998 to create Mego styled figures based on some classic TV properties. While they still do that (they're working on figures based on the 1966 Batman TV series) they've also delved into their own unique properties from time to time, including the series today's figure is from, Mad Clowns. Do you like Megos? How about creepy clowns? How about creepy clowns in nurse's uniforms? If so, this review is for you!  After the break...... 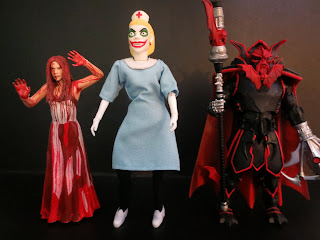 Since these figures are based on the figures of the Mego company, they come in right around 8 inches. Dementia here is a bit taller than that due to her nurses' bonnet. Like many Mego styled figures she's very caricatured in her appearance. She's built on a hard plastic body with a soft rotocast head and cloth clothes. 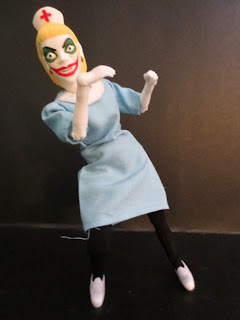 She features a fair amount of articulation: hinged ankles, hinged knees, ball jointed hips, a ball jointed waist, ball jointed abdomen,ball jointed shoulders, hinged elbows, hinged wrists, and a swivel neck. It's a lot of articulation and most of it stems from the use of a system of elastic bands that keep the figure's arms, legs, and torso together. It allows for lots of movement, but does feel a bit loose and fragile in construction. I actually don't know when the figure was released (maybe 2008?) but while she feels fragile, she's help up fairly well to some posing and being displayed. I'm not sure how she'd hold up to play, though. 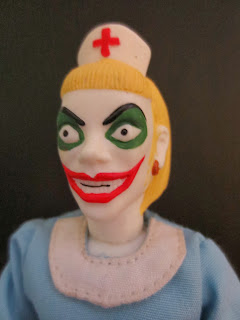 The bodies are extremely plain with no detail and are probably the same as most other female Mego styled figures. I don't feel like undressing her or having pictures of a nude clown nurse on the site, so you'll have to take my word on it. The only sculpted part is the head and it's quite nice and creepy. It's obviously a bit cartoony and over the top, but I think that's part of the charm. The paint's pretty decent with minor slop and bleed, although there are a few rough spots on the right side of the head.

The outfit is plain, but well assembled. It's a blue nurses' smock with a collar and some black footed tights. The tights are stretchy and the smock has a metal button on the back to help dress and undress the figure. 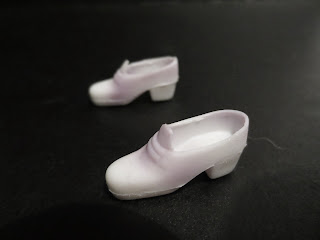 The only thing that could be considered accessories other than the clothes are Dementia's shows. They're simple white plastic shoes with a thick, short heel. They feet easily on her feet and stay on nice and tight. 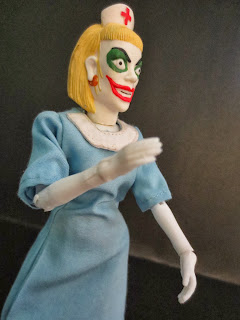 While I don't recommend this figure as a great action figure that excels in sculpting, paint, or being an excellent toy, I do like it for it's novelty factor. If you're a collector of Megos or Mego styled toys or a horror fan who just likes to have random odd figures sitting around, this is something to look into. Unfortunately, I'm not sure you can buy this anymore from ClassicTVToys.com, but you can get her for free! Classic TV Toys is giving away Dementia figures if you order $50 worth of product. If you're into Mego styled figures or plan on ordering the 1966 Batman Megos, check it out!