31 Days of Toy Terror: Henrietta from Evil Dead 2 by NECA 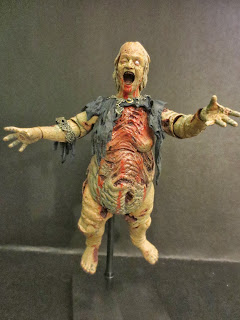 Every few years it seems that Evil Dead fans are blessed with a few great action figures. Typically everything we have received has been from Army of Darkness but last year NECA finally gave us some figures from The Evil Dead 2: Dead by Dawn. The line was made up of three Ash figures, 1 SDCC exclusive Ash, and finally the deadite we're looking at today, Henrietta, the professor's wife who became possessed and gets stuffed in the fruit cellar. NECA has crafted one of the creepiest, most well designed horror figures ever: this is definitely not a toy for kids! Still, there is lots of fun to be had by collectors and Dead fans alike. Here's a brief look at Henrietta: 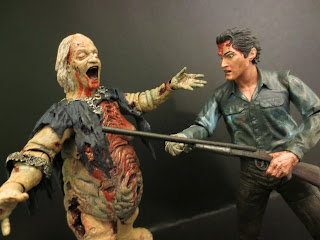 *The head sculpt on this figure is absolutely hideous. I love it. It perfectly replicated the creature's appearance in the film. Not only do you get this "lovely" head sculpt, but NECA threw in a second (easily swappable) head which replicates Henrietta's 2nd more monsterish look. The second head sculpt has a very long, bendable neck. Brilliant work here! Oh, and when you switch heads, even the base of the peg looks quite gory and well sculpted. 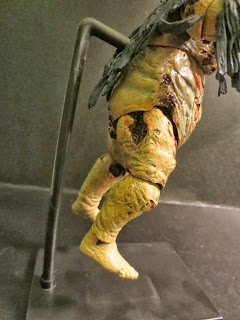 * I always love when any action figure comes with a stand, so I'm pleased that Henrietta does. Not only is it just a stand, however, but it uses a rod attached to the base to give Henrietta the appearance that she is floating like in the film. The rod attaches solidly into her back, allowing her to hover an inch or so above the ground. 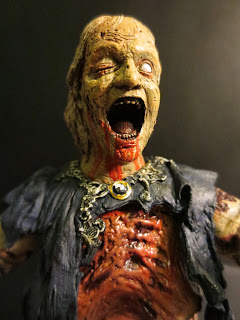 *For being the decomposing and possessed corpse of a slightly large older woman, Henrietta has some decent articulation. Now this isn't a figure like Batman or Spiderman who you expect to take hundreds of different, agile poses, but Henrietta's articulation is solid, usable to give character to her pose, and well hidden. 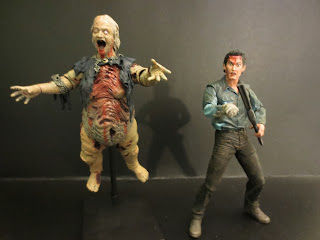 *While I did praise the amount of articulation (since I didn't expect her to have much) and the solidness of it, I did have an issue with Henrietta's left thigh not wanting to move. Since it looked fine, I didn't force it, but just be aware. 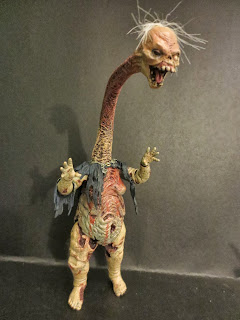 Overall: While there are quite a few expert toy companies out there these days, NECA is really the only company consistently picking up and putting out action figures from cult favorite licenses which collectors seem to love (although Diamond Select Toys is getting there). I'm so thrilled that NECA gave us some excellent Evil Dead 2 figures and whether you are a fan of the film, zombies, or just monsters in general, this should be a good addition to your collection. She's actually still pretty easy to find online for a reasonable price. Let's hope NECA returns to the Evil Dead at sometime in the future! Heck, I'd take figures from this year's Evil Dead too!