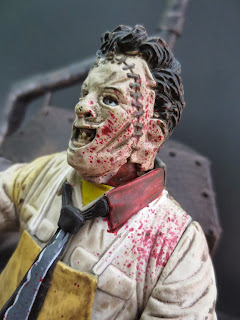 Leatherface was released in September 1998 as part of McFarlane Toys' first series of Movie Maniacs. Joining Jason Voorhees, Freddy Krueger, and Patrick and Eve from Species 2, Leatherface would be part of a small group of horror figures that would spearhead an exciting new trend in action figure marketing and licensing. Did anyone ever believe in the mid 1990s that we would ever get action figures of these various horror icons? I picked up this guy sometime during Fall 2000, right around when Ash, Shaft, and Snake Plissken were released (I intended for him to be an adversary for Ash since they both had chainsaws. I had never seen The Texas Chainsaw Massacre at that point (I wouldn't see it until college) but the figure was bloody, disgusting, and according to my mom "sick", so naturally as a High School student I thought it was pretty amazing. There have been a few figures since based off of Gunnar Hansen's portrayal of Leatherface, but I'll still argue this is the best. This is definitely a bloody, violent figure, so viewer discretion is advised! 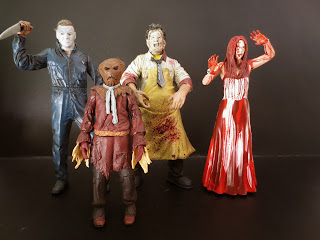 Leatherface is a tall guy, so the figure naturally stands pretty tall compared to some of the other Movie Maniacs figures at 7 inches. While McFarlane hadn't achieved the level of photo realism that they would later reach in their action figures at this point, Leatherface is still very clearly based off of the film with little stylistic interpretation. The figure was available in a bloody, super bloody packaging, and non bloody variant, but who would want a non bloody Leatherface? This is the bloody version, baby and I probably had the super bloody packaging to boot. 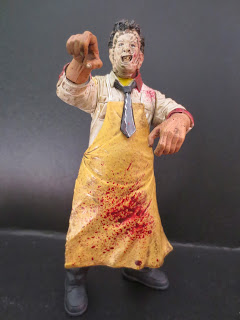 Leatherhead is not a very well articulated action figure, but he's got enough point to allow you to pose him in various menacing ways. He features a swivel waist, swivel shoulders, a swivel left elbow, and a swivel right wrist. The head seems like it should swivel but it doesn't. Leatherface can stand with his chainsaw down on the ground, above his head, or hanging to the side, so is there much else you need from him? At the time this was pretty standard stuff for a collector's line. More elbow articulation would have really helped, however, to give him better chainsaw poses. 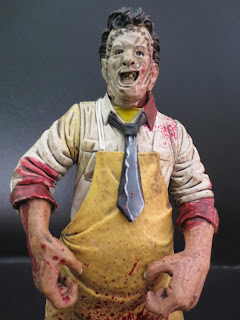 The sculpt is excellent, especially considering this guy was released 15 years ago. His dress slacks and shirt are covered with appropriate folds and wrinkles and his apron and tie are separate pieces that hang from the figure realistically. They give the sculpt a lot of depth.  Leatherface's hands are huge; very menacing and veiny.  And the head sculpt? It's really, really good. This is a creepy sculpt of someone wearing a mask made of human skin. Look how the eyes are rendered as being deeper back as if looking through eye holes. Also check out the malformed teeth that fill Leatherface's smiling mouth. Really eerie stuff! 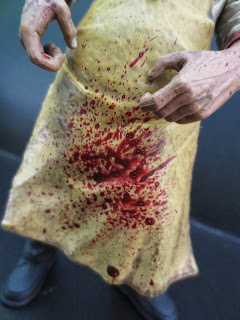 It's hard to decide if the paint, the sculpt or the accessories are the best part of this guy. I love the paint work on Leatherface; great colors were chosen to give his clothes and apron a grimy, stained, and worn look. His hands are also grimy with a dark wash over them. It's the blood that sells this guy, though. I still think this is one of the most realistic "bloody" figures ever created. Look at the blood on his hands and the blood stained into the sleeves. It's quite gruesome. Oh, and the giant splatter across the apron? Just brilliant. 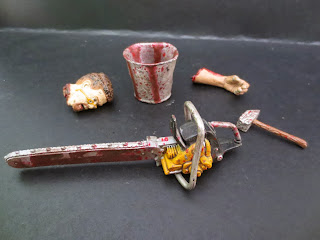 This guy features some amazing accessories. First, he comes with a Texas Chainsaw Massacre Poster on the Movie Maniacs marquee stand. I'm honestly not sure where mine is at the moment, so check out the marquee stand that comes with Pumpkinhead; it's the same sculpt, just with a different poster. The other accessories are Leatherface's chainsaw, a bloody bucket, a hammer, a severed head, and a severed limb. 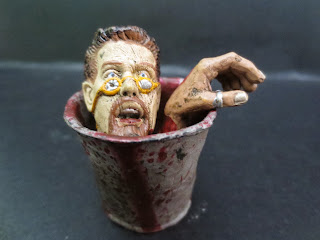 The head and left hand in the bucket are amazing accessories in an insanely disturbing way. The bucket is battered, beaten, and just covered in blood. It really is quite disgusting. The severed body parts are detailed and feature some gross features such as a visible spine, trachea, and other actual features. While I typically display the head and bucket with Leatherface, I usually have one of my Resident Evil Cerberus figures holding the hand in it's mouth. 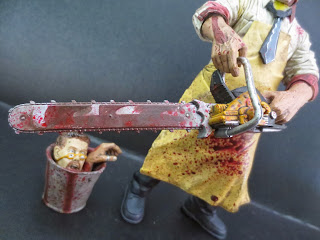 Check out the chainsaw. The thing is quite heavy, well sculpted, and also covered in various colors of blood. The Texas Chainsaw Massacre started the whole horror infatuation with power tools and machinery, so it's an appropriate accessory. 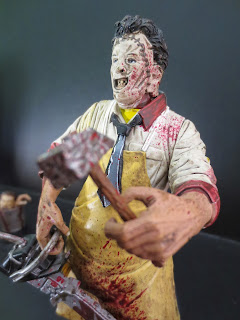 Last, but not least, is the meat hammer. Leatherface has a smaller, tighter grip in his lower fingers that allows him to hold this accessory. More great paint work here.

I love this guy. I can't deny that he's gruesome and not everyone's cup of tea, but no matter who you are you have to admit that McFarlane did this figure right. I'm easily going to give this guy a Great and a half. A little bit better elbow articulation to give Leatherface a bit better chainsaw wielding ability would have been welcomed, but as it is I don't believe there's a better Leatherface figure out there!