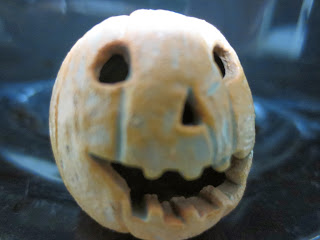 Today is October 31st. Halloween. It's also the final day of 31 Days of Toy Terror, so I've decided to do save the best for last. Today I'm looking at Michael Myers from McFarlane Toys' Movie Maniacs line. Released as part of Movie Maniacs series 2 in 1999, Myers completed the grand trio of horror slashers alongside of Freddy Krueger and Jason Voorhees. Since Halloween is one of my favorite films of all time, I absolutely wanted to review this figure today. I'm actually dressing up as Michael Myers for Halloween this year, too, so if you see The Shape out there tonight while Trick 'r Treating, just know that it might be me. Or, it could be Haddonfield, Illinois' favorite son. Anyways, watch out for the boogeyman and enjoy this review. Happy Halloween! 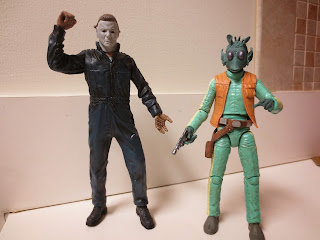 Michael Myers stands just about 7 inches tall. He's a tall fellow and will look just fine with any other horror figures you have in the 6 to 7 inch scale. As I've mentioned in some of my other Movie Maniacs reviews, while the sculpting isn't as advanced as it is today it still looks pretty impressive. While some characters have a slightly caricatured look, Michael really doesn't due to his mask. 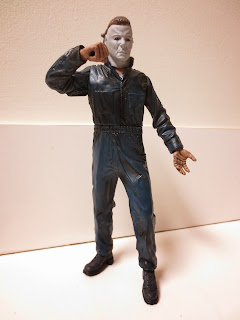 Like many other Movie Maniacs figures, Michael is also pretty much a statue below the waist. He features: boot swivels, a swivel waist, swivel shoulders, a right bicep swivel, swivel wrists, and a swivel neck. Once again, the idea here seems to be that you use the small number of joints to simply slightly modify the largely preposed figure. Unfortunately, a good number of the joints on my Michael Myers are stuck together. The boot swivels don't want to turn nor does the left shoulder. I recognize this is an older figure, but it's still a problem. He does stand solidly on his own, though. 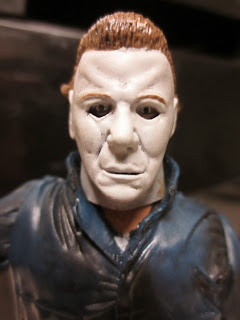 Overall, I really like the sculpt of this figure but there's always been something "off" about it that has bugged me. I know that the hair isn't perfect, but today I realized what the real problem is: the eyes.  While Michael Myers is wearing a mask and does have eyes, most of the time when you see him the eyes are hidden in shadow. On this figure, they're on display front and center and immediately capture your attention. Rather than the shapeless, expressionless face being on display, your eyes immediately focus on Michael's eyes. They should be darker and blacker. The devil's eyes, if you will. Sometimes creating an effective action figure isn't simply translating details one for one but rather capturing the appearance and feel of a subject. The mask features look good, though, as does the jumpsuit. All of the details are perfect on it. 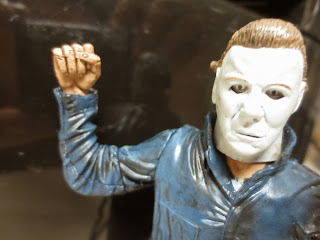 Good paintwork as well. Simple, but nice. There looks to be a bit of a wash on the all dark blue suit to help give it some character. The face is pretty well painted although there are a few messy lines around the hair. Michael's hands are nice and grimy due to that grimy skin technique that McFarlane Toys perfected. once again, Michael's a simple guy so there isn't too much to talk about here. 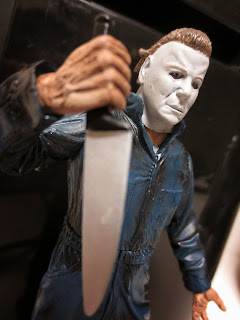 When it comes to accessories, I think Michael Myers comes with just about everything he needs. First, he does come with the marquee stand and movie poster that all of the other Movie Maniacs figures came with (at least the first few waves). Of course Michael comes with the poster for Halloween, but since all my posters were put up I didn't grab it out for the photography session. Sorry! Michael does come with two other vital accessories, though: a jack o' lantern and a carving knife. The jack o' lantern is excellent with a great sculpt. It's actually hollow and thus the eyes, nose, and mouth are actual holes. The paint job is a light orange with just a hint of green underneath. Really great action figure pumpkin! The carving knife is simple but fits perfectly in Michael's right hand. It's a large silver blade with a black handle that's just perfect for slashing, stabbing, and slicing.

I really like Movie Maniacs and Michael Myers, but the articulation problems with this figure and the weird eye issue have convinced to award this guy a Good and a 1/2 rather than a higher score. I'm just afraid that with so many of the joints being gummy and immobile movement will cause the figure to break. Also, I really think all black eyes (no eyeballs sculpted and painted) would have looked better on this figure. It's a design decision, but speaking as a consumer I believe it would have been the way go. I know NECA has done some Halloween stuff, but I think it's time to revisit Michael Myers in action figure form. Perhaps in time for next Halloween? 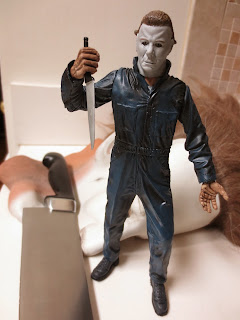