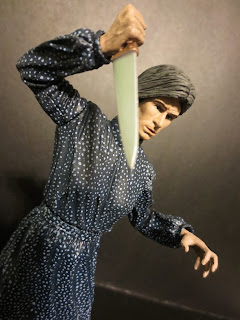 Released as part of the second series of Movie Maniacs figures in fall of 1999, Norman Bates added a touch of classic cinema to the line. From the 1960 film Psycho (and by extension the 1959 novel by Robert Bloch) Norman Bates is truly an icon of not just horror cinema, but cinema in general, so he absolutely deserved his place in the Movie Maniacs line. Even if this figure is just a guy in a dress. Yup, this review is going to contain some massive spoilers for a movie that's now over 50 years old but you know what? Tough. This figure represents Norman dressed as his mother, his murderous alter-ego that is a result of his dissociative identity disorder. For someone just looking at this figure who has never seen the film, you may wonder what the big deal is; it's a guy in a dress. For those (pretty much everyone) who has seen the movie, you'll be impressed by how well this figure captures a few iconic scenes from the film. Ready for a nice, hot review? Then jump right in.... 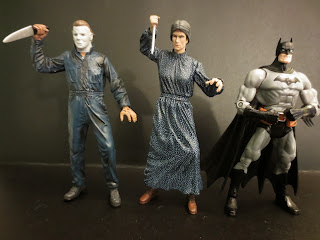 Norman stands almost 7 inches tall so he should be able to fit in with any of your other horror film figures from McFarlane, NECA, Mezco, or any other companies producing figures in the 6 to 7 inch range. This is definitely an unusual looking figure but it's done in a fairly realistic style. The realism of the sculpt isn't on par with many modern figures, but it shouldn't be a deal breaker, either. I really doubt we'll get another Norman Bates figure from any company, so this might be your only chance to own one. 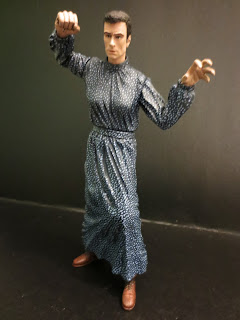 Like most of the Movie Maniacs figures, Norman is pretty stagnant from the waist down  but features some decent upper body articulation. He has: swivel shins, a swivel waist, swivel shoulders, a swivel right elbow, swivel wrists, and a swivel neck. The upper body articulation is less designed for play and more designed to help you get Norman into the perfect stabbing pose; it's solid and works quite well with no QC issues. The swivel shins really only help you to get a solid stance for the figure so he doesn't fall over. 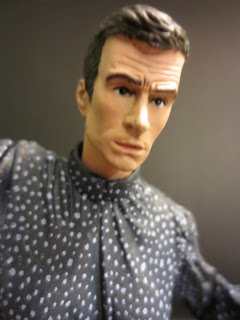 Here's Norman Bates wearing his mother's dress and a wig. The dress is rather plain but is sculpted with all of the appropriate folds and creases to help it look like actual cloth. Poking out from underneath the dress are some standard slacks and dress shoes that the typically casual Norman was wearing when he throws the dress on. I don't think anyone familiar with the film could look at the head sculpt and not see Anthony Perkins in it; if the expression isn't perfect, the likeness is still there. I'd rather have had the creepy smile expression from Norman as he's depicted at the end of the film or a more wild eyed look like when he discovers Lila Crane in the basement of his home. Perhaps the biggest oddity about the sculpt to me is that it depicts Norman as having breasts. I just watched the film last night and looking at stills and I just don't get the impression that Norman was committed to authenticity and really looking like "mother" to the point that he was wearing fake breasts. He wasn't really a transvestite so this seems inaccurate to the film. Am I right? 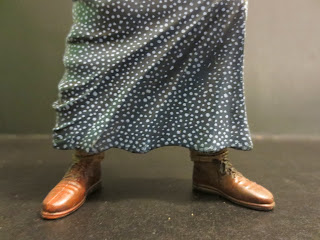 The dress is molded in a very dark blue with light blue dots all over it; definitely not high fashion but good for lounging around the house. There's a weird paint smudge on the back of my figure, but it really isn't terribly noticeable. The shoes and khakis poking out from underneath the dress have a dark wash on them and the paint on Norman's head is nearly perfect. There's not really a detail out of place on it. 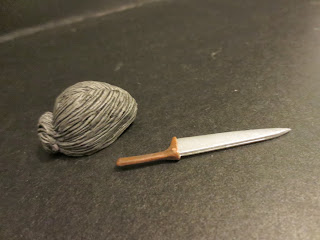 Norman comes with a few accessories. First, he comes with the movie poster and marquee stand that the rest of the figures came with. Norman's obviously has a poster for Psycho in the frame, something that's pretty useful for this figure to help people looking at your collection who aren't as familiar with the character. Norman also comes with his "mother" wig and the knife he uses to kill Marion Crane (Mary Crane in the book, FYI). The knife is well sculpted and painted and slides tightly into Norman's right hand. The gray wig is made from a rubbery material and can either fit on Norman's head or be held in his left hand, if you wish. It's a nice accessory compliment for the character and everything works well. 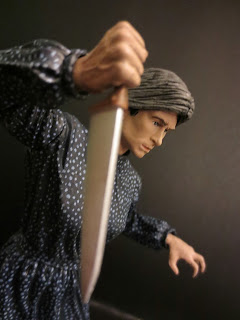 I love Psycho and it's a movie that even folks who aren't fans of horror need to watch if for no other reason but the film's cultural and historical significance. Norman truly is one of the icons of horror (the first movie slasher, really) but rarely gets recognized among the typical slasher crowd of Michael Myers, Freddy Krueger, Jason Voorhees, and others. He's really more in the company of Patrick Bateman or Hannibal Lecter, but still the guy is an icon. It's a good figure, but an unusual. I think I'd give him a Good and a 1/2. Considering that at the time, McFarlane Toys was doing some really cool diorama pieces in the Movie Maniacs line like King Kong escaping from captivity or Jaws attacking the Orca, I'm really surprised that McFarlane didn't try to find someway to recreate the shower scene. They were never a company to shy away from controversy and I'd love to have seen what they might have worked out if things had played out differently.

I've reviewed two other figures from Movie Maniacs this month: Leatherface and Pumpkinhead. I should be having at least one more review on the way, as well. Hopefully, appearing on Halloween. ;)