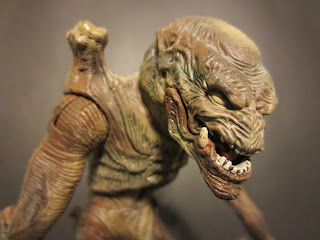 Way back in September of 1999 McFarlane Toys released the second series of their industry changing action figure line "Movie Maniacs," which included well known horror icons such as Ghostface from Scream, Chucky from Child's Play, Norman Bates from Psycho, Michael Myers from Halloween, and the subject of today's 31 Days of Toy Terror, Pumpkinhead. Based on the 1988 film Pumpkinhead directed by special effects master Stan Winston and starring Lance Henriksen (the patron saint of ThEpic Review), Pumpkinhead might not be the most well known of the Movie Maniacs, but he was definitely a well done and worthy addition. Ready for a look at this creepy fellow? Then join me after the break....

Just keep in mind that in Soviet Russia, Pumpkinhead carves you!!! 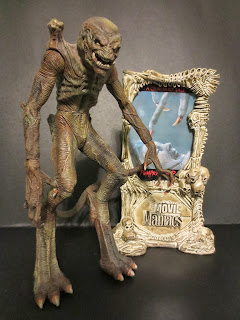 
The many talented sculptors at McFarlane toys always excelled with creating monsters, and Pumpkinhead is no exception. He's a creepy, massive monstrosity that has a very inhuman build.  While his articulation and assembly are now outdated, his sculpt and paint still are good enough that he can stand amongst all of your other horror toys from companies like McFarlane, NECA, and Mezco without looking out of place.  The head sculpt is particularly creepy, especially the way the mouth is just a little open.  He's got lots of sharp teeth and long, spindly fingers. He's sculpted in a hunched over position (it's true to the character) but is able to stand fine on his own. I actually just added Pumpkinhead to my collection last month, but his articulation still seems to work fine and his bendable tail shows no signs of damage or rot, so that's a plus. 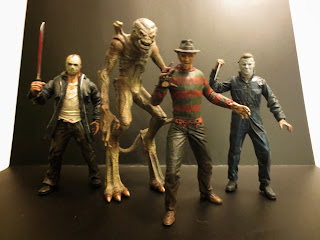 Pumpkinhead comes with a large stand that holds a poster for Pumpkinhead which was an incredibly cool addition to the figure. I know all of the regular carded Movie Maniacs figures from at least the first three waves came with some variation of this accessory, so it isn't unique, but it is still impressive. The stand looks to be assembled from a variety of bones and organic tissue, and is littered with bones and rats. The poster is simply a cardboard image attached to the frame. These really do make for nice displays with the figures and were great additions for the toys, especially when you have a character like Pumpkinhead who doesn't really warrant any particular accessories. 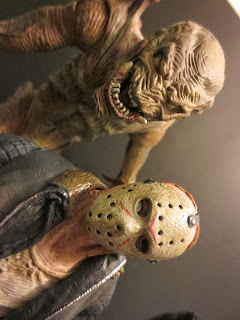 Since the figure still holds up pretty well today for display purposes as a great creepy monster for your horror display, I can't imagine that fans of Pumpkinhead would not try to track this down. It doesn't seem to be too expensive and I don't imagine any other company is going to be releasing a Pumpkinhead figure anytime soon. He's definitely not on the A-list when it comes to horror celebrities, but he still deserves a spot on the back row of your shelf. I've only ever seen the first Pumpkinhead--how are the other ones? Worth checking out? Let me know in the comments.