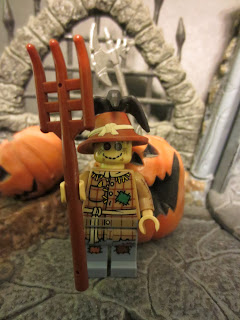 Wow! Is anyone else shocked that Lego is up to series 11 on their little blind bagged minifigures? While I was pretty hardcore into Lego last year, my interest has waned a bit since they didn't continue the Monster Fighters theme, although I still do love the spookier stuff. I just had to have this scarecrow so,I didn't mind sitting in a Target feeling up 46 pouches of Legos in order to find him (look for his pitchfork- it's the only way to know that you've found him!). While we've seen Lego versions of Batman's villain the Scarecrow, I think this might be the first generic scarecrow Lego has released. He's not terrifying, just a pleasant chap to sit in the fields and make sure that everything is in order. Want to take a look at him? Well, flip the page and read on!

First thing's first: remember that when it comes down to it, this is a basic Lego minifigure. Our scarecrow here is made up of the same legs, torso, and cylindrical head of nearly every other Lego minifigure you've ever seen or owned. That's not a bad thing, though, as it means he fits in perfectly with the rest of his Lego kinfolk.  What really differentiates him from the pack are his incredibly impressive paint job and his accessories. 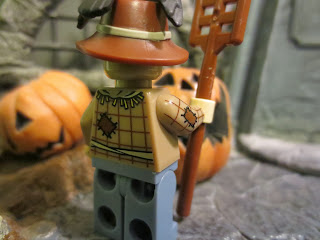 Let's start with the paint (or more accurately, the printing) on the figure's body. This guy looks fabulous! He's wearing blue jeans with lots of little patches on them and an old flannel shirt, also with a few patches here and there. The torso has printing not just on the front and back, but also on the arms, something really cool that's sort of rare for a Lego figure. There's even what looks to be little bits of straw sticking out from the shirt and the bottom edge of the burlap sack over the scarecrow's head (another detail printed on his chest). I particularly like the little bit of wheat sticking out from his pocket. The head looks very friendly and features little crosshatched details to help convey the burlap sack that makes up our scarecrow's head, as well as button eyes and sewn facial features.

The accessories complete our scarecrow, although they also imply that he might not be doing a very good job. He comes with a pitchfork that can easily be held in both hands. It's a piece that I've seen before, but one that's perfectly suited for this agrarian themed minifigure. The accessories that seem to be brand new to this guy are his hat and the crow that sits on his hat. The hat looks like a floppy brown hat with a band around it and another little patch stamped on. If Lego repainted it, it could really make a good gardening hat or a women's Easter bonnet. It has a little hole on top which the crow can easily plug into. It's a neat, simple little crow sculpt, although I wish there was a way for the crow to stand on standard Lego studs. He's an unusual Lego piece, more akin to the feathers and such from Lego pirates and knights. 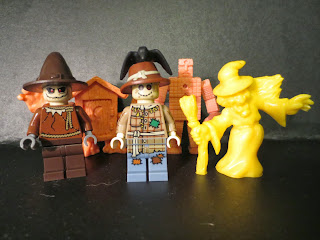 The little Lego minifigures are always fun, and this guy is certainly one of my favorites from recent sets. He's not only well constructed and designed, but he fills a great hole in many Lego displays. Scarecrows are a natural addition to any farm or Halloween scene, so it's nice to be able to get one of these guys at a very reasonable price. I know that if I run across anymore, I'll certainly rush to pick them up, as having a few of these guys in my haunted Lego world would just look fantastic!