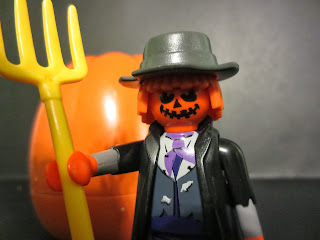 When Playmobil launched their Mystery Figures line in 2011, I decided that I absolutely had to have their super cool Grim Reaper with the neon yellow sickle. Not only did I find him but I ended up picking up quite a few random figures here and there. I hadn't bought a Playmobil figure for quite sometime but I absolutely had to have this wicked cool Scarecrow from Mystery Figures series 3. These guys are typically sold in blind bags but I just bought this dude from Ebay to save time (and money since the nearest place to me that sells these guys is about an hour away). Playmobil has released some friendly, functional scarecrows in the past, but that's not who this guy is. This guy is insane, demented, and wants to destroy you and everything you care about. He'd stab you with his pitchfork and then squeeze lemon juice in your open wounds. He'd come over to your house and use up all of your butter without leaving a note so that when you make toast, you just get stuck with dry bread. In other words, he'll break you. Read more about him after the break... 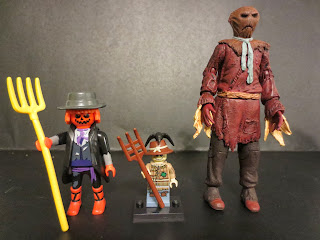 Playmobil is another line, like Lego, that has kept their figures in one consistent scale. The average figure is always 3 inches from top to bottom. Since their are not a lot of 3 inch lines, unless you have other Playmobil stuff this guy isn't going to be able to blend seamlessly into an existing collection. Playmobils actually have some different base bodies, unlike Legos, and they're less blocky. Most of the details are painted or stamped on, but parts like hair and sometimes jackets and shoes have texture to them. The Mystery Figures are sold blind bagged in two different waves: a boys wave and a girls wave. One wave contains all male characters while the other contains female characters. Honestly, both waves have cool characters so no matter your sex, you'll probably be wanting figures from both waves (this guy is from the boys wave). 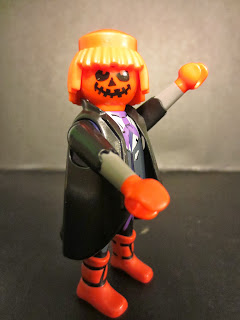 The articulation is pretty standard for modern Playmobil figures: the waist is hinged so the figure can stand or sit, the shoulders swivel, the wrists swivel, and the head swivels. There isn't a wide range of movement, but simple and subtle poses look nice. The Mystery Figures actually come unassembled, so you'll have to snap together the figure. Don't worry, instructions are included. 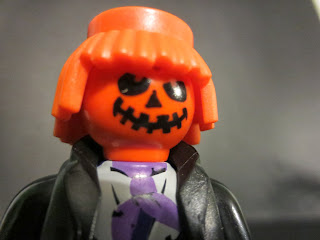 As mentioned above, the sculpt is pretty simple and most of the detail comes from the painted on details. There are a couple of neat sculpted bits though such as the Scarecrow's boots they're a bit thicker and have sculpted straps on them) and his jacket. It's a long suit jacket and is a separate piece that fits over his torso when you're building him. When paired with his sculpted ripped sleeves it really sells the idea of an old hand me down. The strands of hair on his hairpiece are thick, sort of like a very thick straw or an old mop. 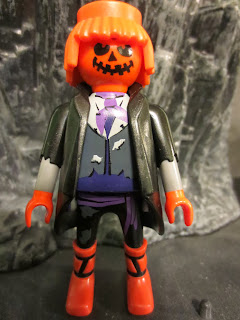 The paint's where the detail comes in, though, and this guy is excellent. The skin is a really bright orange that jumps out at you. It's not neon, but it's close. The face has a nice creepy Jack O' Lantern design on it which adds to the effect. I particularly like his outfit, though: it's a tattered vest with a purple tie and belt. It's quite dapper, although extremely ruggedly worn. 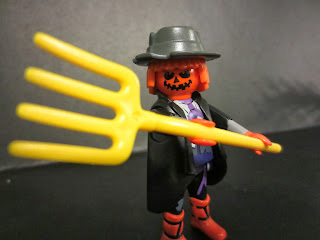 The Scarecrow comes with two accessories. First is his hat. It's a gray farmer's hat that's very beaten and torn. There's even a little hole on the top. Second is the Scarerow's bright yellow pitchfork. Why yellow was chosen, I don't know, as Playmobil usually strives for some nice realism in their stuff. Still, it's fun and appropriate for a Scarecrow. 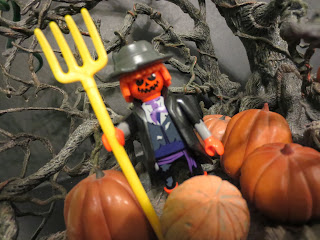 This guy's kind of fun and wasn't expensive at all. If you happen to still have the Playmobil Mystery Figures around you and you like scarecrows or spooky Playmobil stuff, try to find him (the pitchfork is the giveaway piece). I think I like the Lego Scarecrow better, even though he's not super spooky, but this guy is still fun. I question the yellow pitchfork (which doesn't live up to a neon scythe), but otherwise the guy looks pretty good.