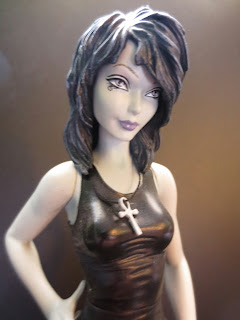 I was really surprised when Mattycollector.com (Mattel's online store devoted to action figures for adults) announced Death as one of their SDCC exclusives for 2012. So far in their numerous releases based on DC comics properties, we have only seen Vertigo characters who have crossed over into the mainstream DC Universe (Swamp Thing and John Constantine). Death comes from Neil Gaiman's Sandman series and is the older sister of the Sandman himself. I was even more surprised that she wasn't part of the DC Universe Classics line, but seems to be her own unique release in a different scale (she's about 9 inches w/o her base). Death is less of an action figure and more of a statue, similar to older properties such as Star Wars Unleashed, the Masters of the Universe "Stactions" by NECA, or the Frank Frazetta Masters Artist Series by N2 toys. She does have some minor articulation, however, but its usefulness is pretty limited. More after the break... 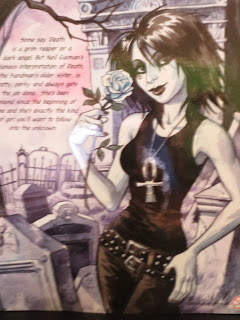 I actually bought this for Arathaelia, who loves all things Sandman and Neil Gaiman. She was really thrilled  with it, as it does look nice sitting next to her various Sandman statues, artwork, and Absolute Editions. She'll probably just use it as a part of her collection and a piece of decor in our living room. I'm looking at it a bit differently, however, from the eyes of a seasoned action figure collector. I have only started reading the first volume of Sandman, so I'm coming at this pretty unfamiliar with the character. That being said, here are my thoughts on Death, who certainly belongs here in our 31 Days of Toy Terror. While she's easy on the eyes, she'll still take your life. So, beware! 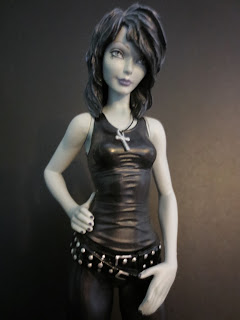 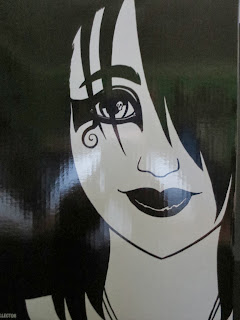 *I don't usually mention it, but here I have to mention how nice the packaging is. Everything comes in a black cardboard box with a drawing of death on one side and an ankh on the other. Its simple yet striking. Open the box up, however, and you pull out the main package the figure comes in: a window box with a very cool graveyard scene. You could probably display this thing in the window box and be very happy with your purchase. I imagine that with a little patience, the packaging could be quite collector friendly. 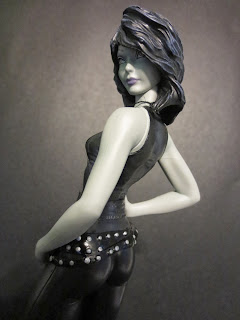 *Death's head and body sculpt are simple but effective. The sculpt is nice and the paintwork on her face is very clean. Her eyes are really well done.

*Having her ankh as a separate piece (held by an actual string) is a nice touch that adds a little extra life to the figure. 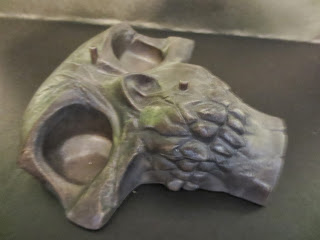 *I always love figures that come with bases or stands, so Death gets a point here. The base is a nicely sculpted skull with foot pegs for Death to attach to. 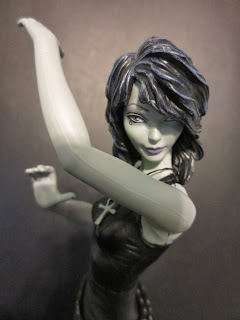 *While Death's upper torso is nice and solid, her lower legs feel really hollow. While it is probably just a part of the manufacturing, it does means that the top of her body is heavier (and not in a Powergirl way) so she really does need the stand to keep from falling over.

*The sides of Death's legs have some flash (leftover plastic) from the molding process attached to them. It isn't super noticeable, but then again, I noticed.

*Some of the paint work is a little sloppy. The paint on her tank top has bled over onto the skin exposed by the arm holes. I've also noticed one or two places where her tank top has paint splashes the same color as her skin. 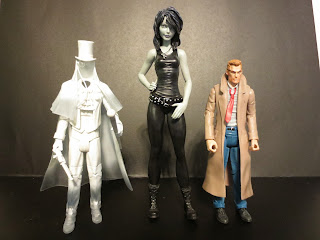 Statues tend to be expensive. If this were a similar sized statue from a company like DC Direct, I imagine this would cost over $100. I don't mind "staction" figures at all; they serve a purpose by allowing for more of a focus on sculpt without the aesthetic killing articulation. For someone just wanting to display this character, the benefits of this being a statue means her sculpt isn't broken up by unsightly joints. I would actually bet the articulation this figure does have really was included to make the figure easier to produce and assemble, as other than changing the tilt of the head, it serves no real purpose. Death is a very attractive character whom many people (my wife included) seem to love. I had hoped that Mattel was intending to launch a line of Vertigo characters in this style and scale at some point, but this seems to be a one off release. It certainly was a less expensive alternative to a statue for a very popular character and comic series. If you love the character and aren't expecting a true action figure, you'll be happy and can still get Death for a relatively inexpensive price. If you're expecting something to fit in with your DC Universe classics or Club Infinite Earths figures, though, you'll be disappointed.

Big Bad Toy Store doesn't have this statue in stock anymore, but they do have these gorgeous Death and Sandman bookends. They're pretty cool and a great way to display your Absolute Editions of Sandman.