31 Days of Toy Terror: Smiler from Doctor Who Micro-Figures by Character Building 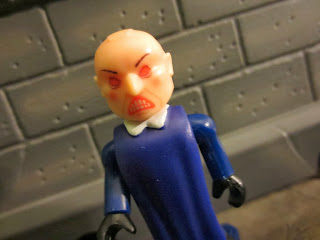 I received this little guy as a birthday gift last month and since the Smilers from the Doctor Who episode "The Beast Below" are pretty creepy, it only made sense to let him be part of our 31 Days of Toy terror. Working aboard the Starship UK, the Smilers were creepy in the episode but aren't what I would consider highly memorable characters . Still, Character Options pushed them heavily in the Doctor Who toy line and they ended up in the first series of micro-figures. These guys were sold in blind bags, so you didn't know which character you'd end up with. For a very short review of an even shorter figure, jump ahead after the break... 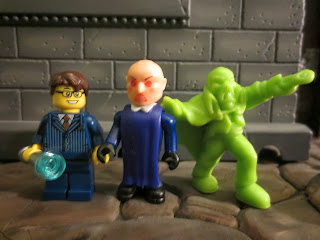 The Smiler is just a little taller than a Lego minifigure but features a little bit more articulation : swivel head, swivel shoulders, swivel wrists, swivel waist, and swivel hips. The figure reminds me more of minifigures from companies like Megablocks as the chest, legs, and head are more rounded and parts like the head and feet are uniquely sculpted rather than taking advantage of a standardized body. The Doctor Who micro-figures are very caricatured with a head that's a little bit too large for the body. 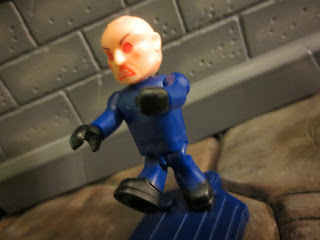 Much of the Smiler is covered by his purple robe that sort of resembles a judge's robe. Underneath is a pretty plain body. The boots feature a little bit of sculpting, there are some minor folds in the robe, and the head features a very pointy nose with a pretty clean paint job on the mouth and eyes. Most of the body is simply molded in solid colors although his robe's collar is painted on. 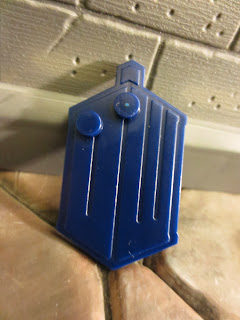 The Smiler's robe is removable (if you take off his head) and he comes with a stand, something I'm always pleased to see. It's a flat stand shaped like the Doctor Who logo that looks like the letters "D" and "W" shaped like the Tardis. 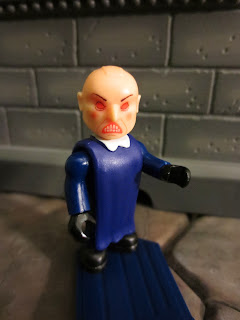 The Smiler is a quality figure, but just not a very exciting one. Character Options and Character Building make some really odd character choices as to which characters they push in their lines (I mean, the 11th Doctor line went for about three years with no Rory figure while having variants of the Smiler offered in the main line). This is probably an Eh and a 1/2 figure. Nothing particularly wrong with it, but it's definitely really only necessary for completests on the line. The Smiler is a neat, creepy little guy, but definitely not one of the highlights from even the pool of Series 5 characters.