31 Days of Toy Terror: The Swamp Creature from Monster Fighters by Lego 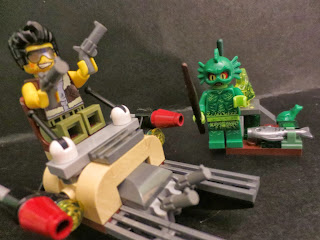 Prior to Summer of 2012 I had never reviewed a Lego set before. In fact, I hadn't bought any Lego sets (other than a few of the board games) since the Star Wars Legos first came out way back in the late 90's, maybe early 2000's. Lego's Monster Fighters theme started a new obsession for me. When I saw these while browsing the Lego aisle to take a peek at the Lord of the Rings Legos that had just recently bee released, I was floored. Here was everything I liked in one place: classic movie monsters, Lego weapons, zombies, modified turn of the century vehicles, slightly steam punkish characters, spooky old castles, and glow in the dark pieces. I was hooked and within two trips to the store I managed to get all of the first seven Monster Fighters sets available. This was the smallest set, an impulse buy set if you will, so how does it stack up? Read on after the break.... 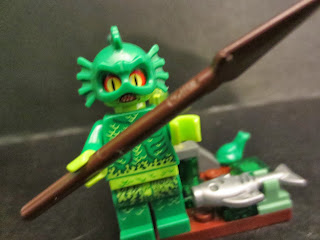 Pros:
* The minifigures are excellent. The monster fighter is named Frank Rock and he has a cool 1950s-ish greaser vibe to him. He has two faces on his head (one with sunglasses and one without). He also has a bunch of revolvers which are always nice.

*The Swamp Creature is also excellent. A clear homage to the Creature from the Black Lagoon, he also bears a passing resemblance to Mer-Man. He comes with a little spear for poking stuff. 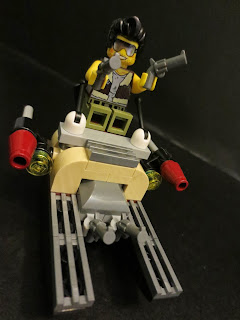 * The swamp boat is a decent little vehicle with some missiles that you fire by flicking them (no springs involved). It's tiny and simple, but kind of fun.

*As always seems to be the case, Lego stuff is always of the highest quality. Their plastic and QC is just top notch. 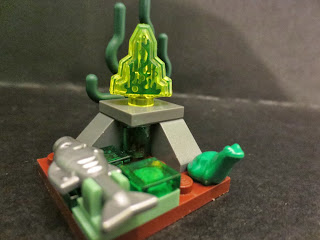 Cons:
*The swamp base isn't too exciting. It's more of just a little display piece to hold the Moonstone (an accessory every monster has which is part of the plot of this theme). I do like the little frog, though. Since my primary Lego display is a giant haunted world I have placed the swamp base alongside the Pirate's of the Caribbean set that has an old water wheel, so now it's like a big spooky old ruin inhabited by mer-men. 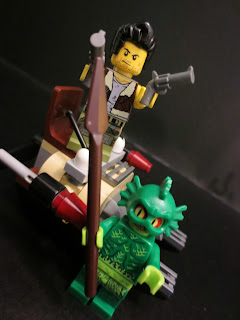 Overall: This is a small set and retails for around $7 if you can still find it. The figures themselves are definitely the draw (especially the Swamp Creature) but I think overall, you definitely get your money's worth. There's more to this set than to most action figures you'd find in this price range. And while it's not the best example of the Monster Fighters theme, it's a nice companion piece or impulse buy item. No real faults here, especially for fans of the Creature.