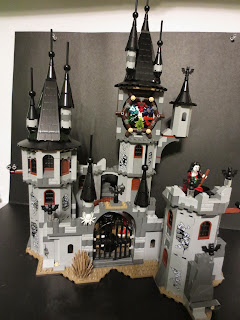 This is the set that got me back into Lego during the summer of 2012.  I hadn't purchased any Lego sets since Star Wars: Episode 1 was in theaters (the first time). Maybe a minifigure here and there or one of the excellent boardgames, but Lego at large was pretty much off my radar. I paid attention to the licensed properties and the video games, but that was just part of my general nerdery. Long story short, it really wasn't much of a surprise that a non-licensed Lego theme managed to avoid my attention. However, on a trip with my wife to check out the Lego aisle just to scope out the newly released Lord of the Rings sets last year(which I had no intention of purchasing, but have since purchased) I happened to stumble upon the Monster Fighters theme. Then I saw the Vampyre Castle and I knew I would be purchasing the set before I left the store.

As a theme, Monster Fighers pulled me back into Lego by combining everything I like into one terrifying package: Spooky castles? Classic monsters? Glow in the dark pieces? Cool, modified early 20th century vehicles? Zombies? Heroic battlers of the occult with some steam-punk sensibilities? Check yes to all of these. I love this theme and I love the Vampyre Castle. I'll tell you why, after the break... 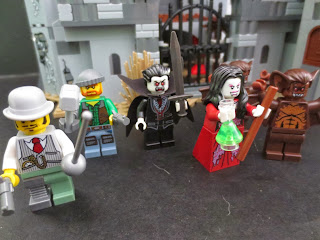 While it is an expensive set (MRSP seems to run between $99.99 and $109.99 but it's getting rarer) it definitely includes quite a few pieces (949) which assemble into 7 minifigures (Lord Vampyre, Vampyre Bride, 2 Bat Monsters, Dr. Rodney Rathebone, Jack McHammer, and a Skeleton), 6 Moonstones, a net launching roadster, a gaggle of fun accessories, the vampire's coffin, and the castle which is pretty large and has a number of rooms and features. As always, here are my thoughts, both positive and negative:


Positive:
*The minifigures are all top notch. The vampires' faces glow in the dark. The Bat Monsters have some cool wing pieces. Both Rathebone (definitely an allusion to actor Basil Rathbone) and McHammer have a bionic limb of some kind (McHammer's robotic arm is very cool). Most figures have printed details on the front and rear of their torsos.

* The castle has some great design details. I especially love the bookshelves, the bed, and the organ in the highest turret. While someone could potentially rebuild the castle to make it "non-spooky" it certainly has plenty of atmospheric elements. Over time I've added additional little details to mine, so it's tough to tell what pieces might be original and which one's aren't.

*Besides just good design elements, there are lots of fun play features as well. I especially love the trap door that drops a minifigure into a pit of spikes, the spikes that can pop out when someone walks through the main gate, and the blank wall that turns into a spiral staircase.

*Plenty of cool accessories are included. A sword, lots of guns, a cauldron with ingredients, a hammer, a fencing foil/ rapier, manacles, and a glow in the dark spider.


*I was skeptical about how well the net launching device on the roadster would work, but was pleasantly surprised to find it works very well. Not only does it work well, but the roadster is one of the most appealing vehicles in this theme.


*There are some little offshoots that hang off of a few of the towers. These are perches for the Bat Monsters to hang from. It isn't explained in the instructions, but is a very fun little feature.


Negatives:
*So far only the Bat Monsters are exclusive to this set (the Bride will come with the "Haunted House" this Fall and McHammer will come with "The Zombies" later this summer. Not a big deal, but worth mentioning.

*The Moonstone device looks cool, and is integral to the plot of the theme, but it doesn't really do much. I can imagine much cooler ways to integrate the moonstones into the castle.


Conclusion:
I love this castle. It has so many cool features and rooms that I can't stop staring at it and exploring it. While kids will surely have a blast with it, adult collectors will love the ambiance of the set and how it playfully implements many of the popular elements of classic horror films. As always seems to be the case with Lego products, the quality is exceptional. If you're interested in the castle and are able to pick it up before the price skyrockets as most Lego sets like this do about two years after they're released. You definitely shouldn't be displeased. It is a superb, imaginative set and I've actually used it as a basic to keep building a larger castle.While this is my main turret and tower, I've combined it with parts from the Hogwarts castle, Helm's Deep, and some of the older sets to create a giant castle for my Vampire to live in. 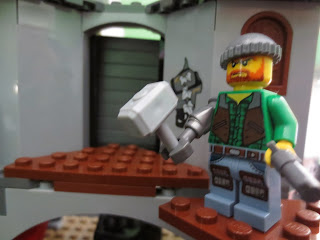 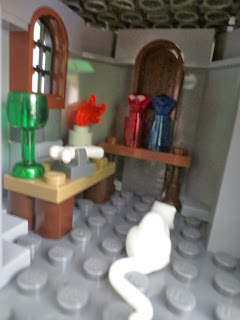 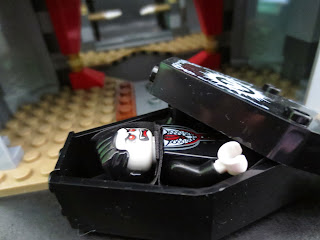 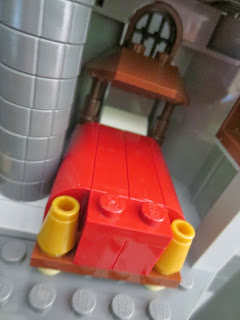