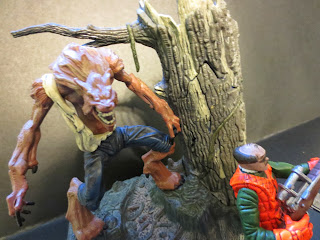 I'm a sucker for both horror toys and dioramas, so it should be no surprise that one of my favorite toylines of all time is McFarlane's Monsters Playsets. Series one was released in 1997 and just absolutely rocked my young brain at the time. I have very vivid memories of receiving the Dracula and Frankenstein playsets for my birthday that year. These guys were displayed on my shelf for a very long time after they were first released and still make up a crucial part of my horror collection. Today we're looking at my favorite set from series one, the Werewolf playset. It features a truly wicked werewolf, an unfortunate hunter named Steve (pretty sure he was named after someone from McFarlane toys), and a nice wooded base for them both to hang out on. More details after the break.... 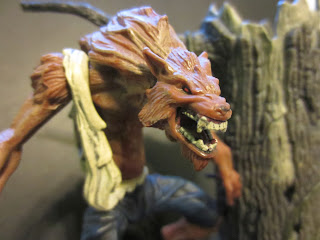 One of the best things about these toys is that since the sets included two figures, a diorama styled base, and lots of accessories, each one sort of told a story. Here's a story I wrote for this set: 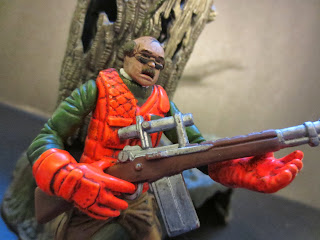 Despite the autumn chill in the air and the beautiful weather that accompanied it, Steve couldn't help but be disappointed at the way the weekend was going. Nothing. He'd bagged absolutely nothing so far. This was quite possibly the only weekend this season he'd get to hunting this year and he certainly want to go home without a kill. "Not without some blood on my hands," he thought to himself, slyly laughing. It was almost dark, meaning that Steve only had tomorrow morning left  to hunt. Then it was back to suburban hell complete with a nagging wife, screaming kids, and a job he hated. The weekend was supposed to be a bit of respite from the norm for him, but it just wasn't going well at all. He'd forgotten to bring toilet paper, he hadn't seen or hear anything in the woods since he arrived, and now he'd dropped his favorite hat. It was a stupid padded orange cap that really didn't fit his head but he liked it, so he trudged back through the woods to where he'd spent most of the day. While it was getting darker by the minute, the moon seemed nice and bright. He held off on using his flashlight for now, although he did grip his rifle a bit tighter. 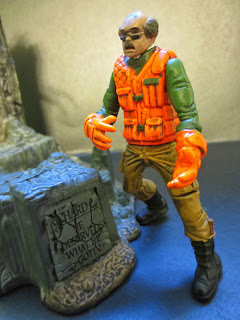 It sure was quiet out. Eerily quiet. Usually you could hear stuff rustling around, birds making noise, insects chirping, but nothing seemed to be out here. While nature sounds sometimes creeped Steve out, their absence was disturbing in an entirely different way. It was weird to think that there might be nothing else living for miles except for himself. Steve played with the safety of his rifle and stared up at the moon. Suddenly, his foot kicked something hard and he fell to the ground. A quick expletive burst out of his mouth, followed by a longer strand of profanities as his rifle discharged. Laying on the ground clutching the weapon, Steve panicked. His finger had been on the trigger and he'd reflexively pulled it as he fell. Recognizing that he could have blown his own head off at first horrified him, then brought a macabre chuckle to his lips. He imagined the look on his wife's face if he just never showed up at home again. It brought him a sick sense of pleasure. As he started to stand, Steve looked down at what he'd tripped over. What at first seemed to be a rock turned out to be smoother and slightly shaped. He pulled out his flashlight to take a closer look, feeling his own heart almost stop when he saw the writing on it. It was a crude gravestone. Panic filled his chest and ever childhood bogeyman returned to his thoughts as he read the words scrawled across it: "Richard C....He deserved what he got!" 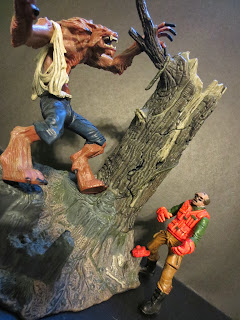 "Who buries someone out in the woods and makes a marker for them?" Steve thought. Scared at the thought of something, but not entirely sure of what, Steve took off at a moderate sprint with his flashlight in one hand, lighting a path. He began running up a small hill when something orange was illuminated by his flashlight. It was his hat. It wasn't on the ground, though. Actually, this didn't even look like the place where he'd spent the day. And he knew he hadn't hung his hat from a tree branch. It was with intense fear surging through his body that he reached for his hat. It was with lightning swift speed and a deadly precision that something swung down from a higher branch of the tree and separated Steve's left arm from his fear plagued body. 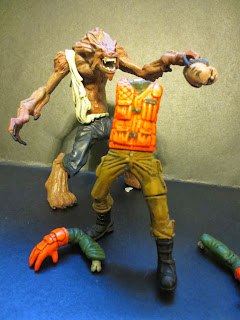 For one second Steve stared quietly in shock and horror. Then he screamed. Blood spewed from where his limb once hung. He began firing his rifle at a shape he couldn't identify, but it only seemed as if he was firing a BB gun at a freight train. Soon the rifle stopped firing and Steve realized it wasn't because the gun was out of ammo, but because his right arm was now missing as well. Standing breathless and about to pass out from a growing lack of blood, Steve stared into the eyes of a creature that stood well over a foot taller than he. It's red eyes, fang filled mouth, and long spindly limbs would have caused Steve to let out another bloodcurdling scream if the creatures razor sharp claws hadn't separated Steve's head from his body first.


And he was never heard from again!!! 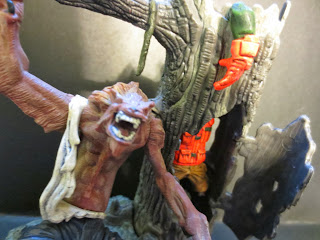