31 Days of Toy Terror: The Zombies from Monster Fighters by Lego 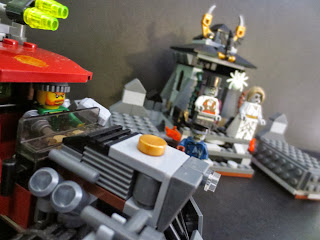 When I was growing up, zombies toys (well, really zombie anything) was hard to come by. I remember having the Ghostbusters zombie when I was quite young and just as I was entering high school Toy Biz began releasing action figures based off of the Resident Evil video game series (which we reviewed to completion during our Resident Evil week). These days, however, zombies are everywhere, and that includes Lego sets. One of the now hardest to obtain releases in Lego's Monster Fighters theme is simply titled "The Zombies" and it's a mausoleum playset with 3 zombie figures, 1 human monster fighter, and a massive truck armed with giant hammers to brain any of the undead who stand in your way. It's a great set that has really jumped up in price now. Here's a look at it, though, just because: 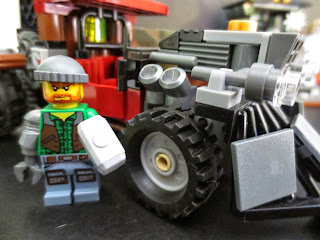 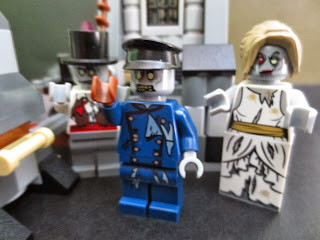 * First of all, I gotta say that the minifigures are really, really cool. The Lego zombie from the 1st series of individual minifigures has become really rare and quite expensive: here's a chance to grab three zombies in one go. The zombie bride might be one of my favorite minifigures ever, as she is very detailed and manages to be both cute and creepy at the same time (not many girls pull that off well). Her head is double-sided as well, giving her two distinct facial expressions: a hopeless, open mouthed stare and a slightly evil smirk. The Zombie groom, driver, and Jack McHammer are all excellent minifigures as well, although Jack and the driver are available in other sets. 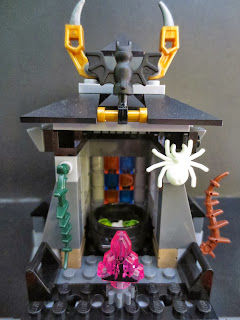 *The graveyard set is a very atmospheric piece that would would look good outside of your Vampyre castle, Haunted House, or any other slightly spooky Lego set. I love sets that add environmental touches to a Lego display and this mausoleum is well designed. It features "broken" steps flanked by torches leading up into the mausoleum, vines growing around the outside of the unkempt crypt, a "stained glass" window, ornate details on top of the structure, and a pedestal for the Zombie moonstone. It's a really nicely designed build. 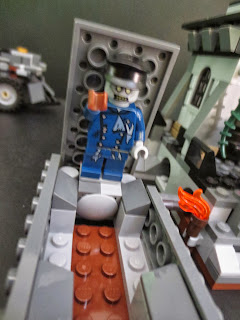 *The set features some fun play features that work well. When you pivot the moonstone on it pedestal, the two tombs flanking the mausoleum spring open allowing the zombies inside to "rise" from their graves. Spooky stuff! There's also a cauldron of bones and other stuff (little translucent green bits) that sits inside the mausoleum. With the push of a lever, the cauldron can go flying, covering any trespassers with a nasty concoction. There's a glow in the dark spider, too. 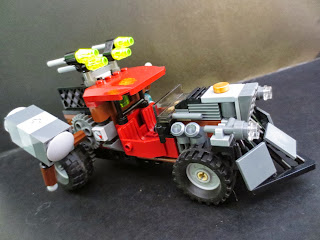 *Lastly, let me say that the hammer truck is beyond cool. It doesn't work the way you expect it to (the hammers seem to rotate the opposite way of how you would imagine them to rotate) but it still produces a very cool effect. The truck is nicely designed with a killer engine and a plow on the front to wade through zombie hordes. There's also a gunners station in the bed of the truck which features four of the flick fire missiles which Lego has been using lately. One of the neatest vehicles in this series! 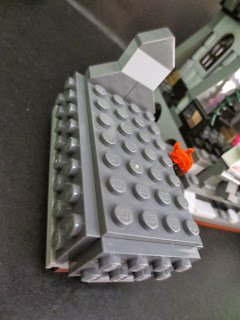 *My only negative in this set is that the zombie bride cannot properly fit in the tombs because of her dress and hair and the zombie groom can only fit if you remove his top hat. 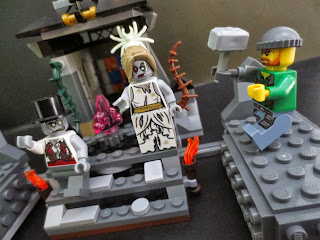 Overall: I love the Monster Fighters series and The Zombies might be one of my favorite sets. I really wish Lego would continue this theme (it certainly seems Hasbro's Kre-o is all over the horror genre). I love how good all these sets look together and I actually expanded my set using various pieces from Heroica sets to build more graves and fences. To me, this is easily an Epic set and the centerpiece of my Lego graveyard.