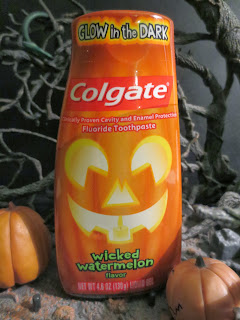 With all the Halloween candy and junk food I've reviewed here on The Epic Review, it's about time that I review something that's somewhat healthy or at least contributes to the fighting of tooth decay. Today I'm looking at Colgate's Wicked Watermelon toothpaste. It's a delicious fluoride toothpaste in a cool glow in the dark package (the toothpaste itself does not glow). Ready for something spooky that will also help you keep your pearly whites shiny and clean? Then check this out after the beak.... 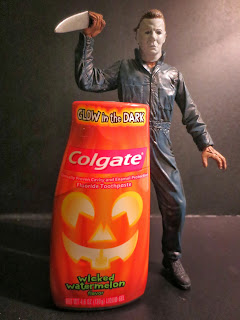 The package is a glowing, happy Jack o' Lantern. I like it. It's really bright and fun. There was also a package that was purple with a witch on it, but I opted for this one.  The label glows in the dark a little bit which is kind of fun if you wake up in the middle of the night and decide to brush your teeth. I think I'm going to make a found footage film called Periodontal Activity where someone wakes up in the night and feels compelled to brush their teeth. It'll show them brushing and brushing until their gums bleed, complete with random speeding up of the film. Brilliant! 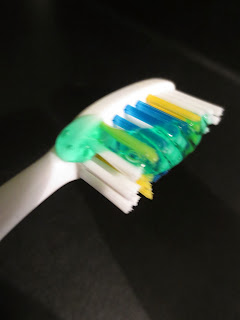 I love the look of this stuff. While the photo makes the gel look more bluish, it's actually a nice slime green. It's a bit runnier than your average toothpaste, but it's also eight times more delicious. The artificial watermelon flavor is amazing. Years ago I bought some watermelon toothpaste for kids that had a dragon or something on the package, but in the past years I've pretty much just used whatever mint flavored toothpaste was around the house. Now, however, I will probably explore flavored toothpaste again. I'm way more likely (like three to seven times more likely) to remember to brush my teeth when the stuff looks like green slime and tastes like this stuff.

Major props to Colgate for helping my teeth to stay clean this Halloween! While toothbrushes are still lame Halloween treats, this would actually be a worthy addition to my treat pail.