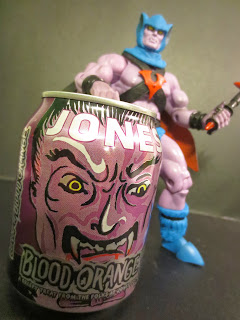 Halloween is quickly approaching, so it's time for another review of one of the Halloween Jones Soda flavors! We've already covered Red Licorice and Candy Corn, so now we're looking at Blood Orange. Blood oranges are a real variety of fruit, not just a made-up name for a soda, so if you're familiar with them you might have an idea as to what to expect. They're sweet, but a little bitter as well. These little cans seem to be available at Target and are sold in packs of four although I've heard rumors that they can be found at some other stores as well. Ready for a look at blood orange soda? Then join me after the break... 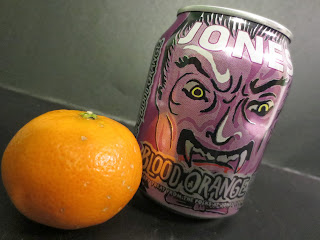 First let's look at the can. It's pretty cool- a pale purple vampire on a purple can. the vampire has spooky yellow eyes (almost hypnotic, really) and some very pointy fangs. He's also got a weird crushed nose, kind of like a vampire Owen Wilson. I love the art style of the cans and of course, choosing a vampire to represent blood orange was a good decision. 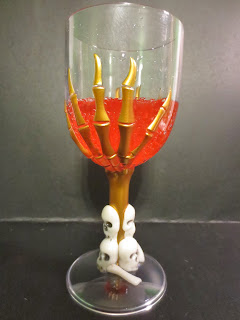 How's it taste? It's pretty good! The color is gorgeous (it's almost a pinkish orange) and looks really appealing, especially when I quaff of it in my spooky skull adorned goblet. It's very sweet, but has a slightly bitter aftertaste. Not an unpleasant bitterness, though. Imagine a richer orange soda that tastes a bit more like actual oranges and you're on the right track. While this is the least exciting of the Halloween sodas, it's the one that I imagine most normal people would drink on a daily basis. if I were rating this on a scale that was based on the Friday the 13th films, this would probably be Friday the 13th: Part 3-D- it's fun and shows some promise although the gimmickry of it is still a huge part of the appeal. Pick it up today if you like either blood or oranges.