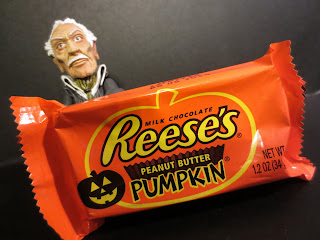 The Reese's Peanut Butter Pumpkin is another Halloween candy that, like the Cadbury Scream Egg and the soon to be reviewed Halloween Peeps, has roots with an Easter candy. If you've ever had a Reese's Peanut Butter Cup, a Reese's Christmas Tree, or a Reese's Peanut Butter Egg, you know what to expect here. It's a chocolate covered peanut butter confection that looks vaguely like a pumpkin. Then again, it's a chocolate covered peanut butter confection that looks vaguely like a pumpkin!!! (See the excitement?!) When I think about Reese's cups and Halloween, I always think about the 90's commercial where we see a Reese's cup that has been attacked by a vampire. Remember it? Anyways, I guess at some point Reese's decided to fully connect their product with Halloween, so we get this spooky treat. The standard Reese's package is already orange, yellow, and brown, so it was already appropriately autumnal. Someone didn't have much work to do, so a simple yellow pumpkin outline and a smaller jack o' lantern was added. It's simple, but nothing terribly memorable when we live in a world where the M&Ms can dress like mummies and the Kool-Aid man happily dons a vampire cape (in years past the packages have been more exciting). We'll taste test this sucker after the break.... 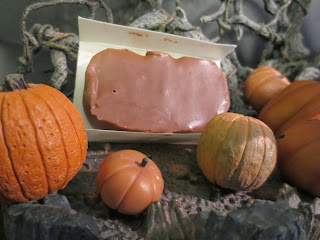 
How's it taste? Well, it's a Reese's Peanut Butter Cup. I can't taste any difference between this and the average Reese's candy, so I guess that's a good thing? The peanut butter is kind of grainy which sounds bad but actually helps the candy to be more easily consumable than standard peanut butter which sticks to the roof of your mouth. It's really sweet though, so take it easy when chomping on these. And brush your teeth afterwards, too. Also, make sure to respect your elders and always leave a note when you use the last of the milk! (Those helpful hints ought to count for a few community service hours, don't you think?) Anyways, much like the feud between Seabiscuit and War Admiral, the North and the South, or Lindsay Lohan and Hilary Duff, the Reese's Peanut Butter Pumpkin and the Snickers Peanut Butter Pumpkin are battling for your Halloween candy money. If you want my recommendation, at the end of the day I'd go with the Snickers Peanut Butter Pumpkin, both in terms of taste and craftsmanship.